“I wish I wasn’t here tonight. I wish you weren’t. I wish we could talk about the exciting work we do. But we have a lot of work to do on gender equality”.

So said Dr. Mariana Lopez last Thursday night, in her opening for a panel session on Gender Equality and the Audio Industries – the first #HeForShe event hosted by the Audio Engineering Society UK section.

The #HeForShe gender equality campaign was launched by the United Nations in 2014 by actor Emma Watson. It invites people around the world to recognise that gender equality is not just a human rights issue, not just a women’s issue. It also asks “men and boys to help end the persisting inequalities faced by women and girls globally.”

AES UK formally aligned with #HeForShe in April 2017. In a post on their public Facebook page in August 2017, they say “It is our responsibility to make sure we are building a fair industry for all.” Dr. Lopez, who is the first female chair of AES UK, spoke about how important it was for AES UK to formally align themselves with the campaign while admitting that when she announced the alignment, she hid from her colleagues her fear of the inevitable backlash.

The backlash, when it came, actually proved the point that campaigns like #HeForShe are still necessary. The audio industry has a gender inequality issue. Too many people working in the industry fail to recognise this, unintentionally or otherwise.

The answers to the first question put to the panel addressed this lack of awareness: why is there a gender imbalance in the audio industry? Several panel members spoke about the deeply ingrained sociological and cultural biases that we all have to learn to identify and fight against. Examples included everything from teachers telling pre-schoolers that “girls don’t play drums” to the marketing campaigns of educational institutes placing women in supporting roles in photos –  e.g., a female student holding a clipboard behind a male student operating a console.

Imagery is one area where you need to see diversity to send a message of inclusion. If girls associate audio technology, and technology in general, with men and boys, because of the images they see, it will be much harder for them to avoid internalising the message that the audio industry is not for them. In other words – you can’t be what you can’t see.

Even if girls manage to fight against cultural and sociological bias, there are risks to being the only woman, or one of only a few, women in a team, class, or company. As Dr. Liz Dobson said, when there is one person in a space representing a demographic, they feel they cannot make mistakes, for fear this will reflect on the entire demographic.

The panel acknowledged their responsibility as educators to challenge bias, call out bad behaviour and demonstrate your understanding of gender inequality as a teacher. The importance of challenging lexicon, in particular, was raised – for example, questioning gendered terms such as “camera man” and “sound guy.”

One of the most useful aspects of this panel came with the final question: what can we all do? While open, frank discussion of the issues surrounding gender inequality in the audio industry can raise awareness; change cannot happen without action.

So what can you do?

Part of this will be to remove barriers that can prevent women from accepting speaking invitations – for example, having to arrange and fund childcare at short notice. Plan early and provide bursaries or other support to allow women the chance to accept.

As #HeForShe says, “no one is whole until we are all wholly equal. Together we’re going to change the world.” 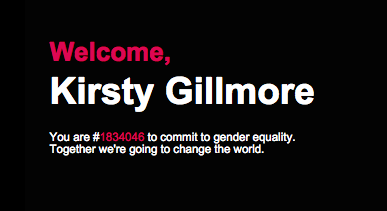