Breaking Down Doors in Brazil

Thirteen years ago Fernanda Lemos was a musician in a rock band; today she is the only woman working as a sound engineer for Loudness, the second largest sound company in Brazil. Loudness was founded in 1976 and has become the premier production company in Brazil, providing sound for international touring artists such as Rush and Bon Jovi, Broadway productions and events. How does one go from being a musician to being the only female sound engineer for the one of the largest sound providers in Brazil?

The Audio Team of Loudness

It all started back when she was a keyboard player in a band without anyone to run sound. So Fernanda started mixing their sound checks, and at the same time, she was learning how to record. She read a lot about acoustics, audio, and started following the Brazilian band Paralama do Sucesso. She went to every show she could and tried to get into the sound checks. Paralam do Sucesso had the best audio technology, and she got to be there, watching, listening, and asking about everything. At some point, she decided to leave the stage for backstage.

Fernanda enrolled in an audio course with Brazilian sound engineer Carlos Roberto Pedruzzi. A year later she enrolled at the Estacio de Sa University, in Rio de Janeiro. The university offered a bachelor’s degree in a program called Music Production and Recording, directed by Brazilian music producer Mayrton Bahia. As luck would have it, one of the instructors owned a small sound company and gave Fernanda her first job.

Fernanda started as an assistant sound tech at a small theatre. There she started mixing monitors and FOH. The pay was low, but what Fernanda gained in experience and confidence made up for it. She eventually started working outside shows with Sigmatec and then was referred by her first audio instructor, Mr. Pedruzzi to be a trainee at Loudness.

At Loudness she does a bit of everything depending on the gig, although she works mainly as a monitor engineer or monitor tech. She has been the monitor engineer for Brazilian artist Rita Ribeiro for the last five years. Fernanda is also able to work alongside her husband, a sound engineer at Loudness, he usually takes care of FOH, while Fernanda takes care of the stage. She says they are known as the Audio Couple. She has been able to take part in additional training and certification seminars with Meyer Sound, Digico, Pro Tools, K1 and V-Dosc, and Smaart. She is fluent in English which is an asset when working with international artists. 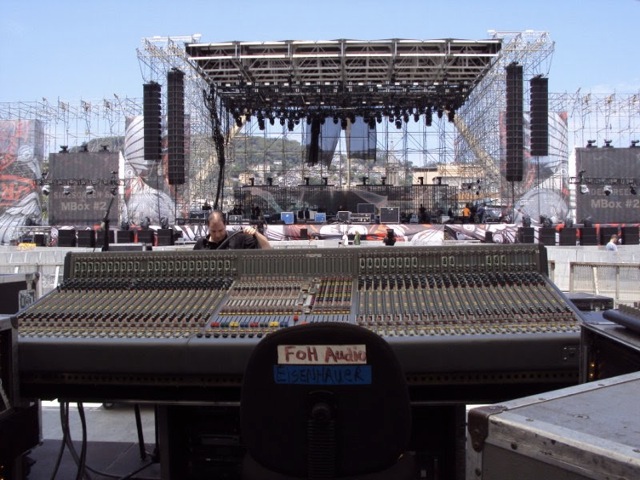 Fernanda recalls one of the most significant and important shows she has done as a lead tech. The shows were Andrea Bocelli at Belo Horizonte, and São Paulo. Andrea Bocelli concerts are quite challenging as their sound crew is very meticulous. The shows are usually staged in expansive areas, with a significant amount of equipment. The Belo Horizonte concert was especially difficult as they only had one night to set up. It was staged on a busy avenue that had to be closed down. “We had to set up the delay towers in the middle of the traffic! The Bocelli crew are great people and superb professionals, so we were able to pull it off. Every time I work with the Bocelli crew I learn something”. 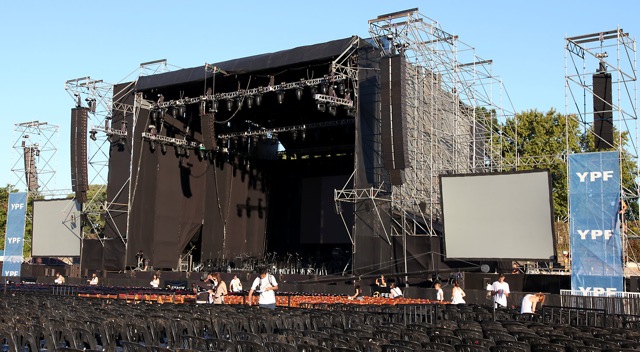 Loudness provides live recording services for many of the most prominent artists in Brazil. Fernanda often takes care of the recording unit, setup and operates Pro-Tools when it’s needed. “We have two main live recording sets, one fully digital with Avid D-Show/Profile as preamps, other with Amek Recall by Rupert Neve consoles, which sounds amazing! All were recorded with 2 Pro-Tools 10 (HD 3)”. When she was in school, she worked at the university’s recording studio, and this was the beginning of digital audio in Brazil, with Yamaha’s digital consoles like 02-R. The studio had one, and a Pro-Tools 24 mix plus. Because it wasn’t very reliable at this time, they were still using ADAT recorders. This gave her the opportunity to start and continue using recording systems.

Fernanda has faced obstacles, and some of them are cultural, as her job in Brazil is viewed as man’s work. Some of the artists automatically won’t work with her as they do not believe a woman is capable of doing the job. In the beginning, she thought this would change by showing she was capable of doing the job. She has come to realize it is going to take much more time and societal norms must change. She is proud that she is a part of making the change happen.

Fernanda offers this advice to young women entering the field –

I believe a musical talent helps a lot when dealing with musicians, I’ve been in their position before, and I know how it feels. It makes it a lot easier to communicate with the artists. Listen to all kinds of music.

Being able to remain calm when dealing with problems is crucial.

I love huge PA systems that sound smooth and great, even at long distances. I love big concerts!!! The first big PA I worked with was a Meyer Sound M3D, and I remember very well how delighted I was. I know it’s heavy and not the easiest to set up, but I still like the way it sounds. The L’Acoustics V-Dosc is kind of a dream sound, you just set up and it’s ready! K1 has made our lives so much easier, it sounds incredible in all situations, from heavy metal to Andrea Bocelli. I love analogue desks; I’m quite sad that I entered the audio world at the “end” of these great-sounding technologies. My preferred one is surely the Midas XL4! I have done a lot of jobs only setting it up for other people ” I did not get to really “put hands on it,” but my first time mixing with one was delicious! I’m not an anti-digital person, nowadays I like a lot to use Digico desks like the SD8, and I think they sound really great! But if I had a choice for touring… big heavy Midas, no doubt”!

I always loved to travel, and I hate routines that never change. Mix it all together, and I found the perfect job. I never get tired because we are always moving and have new challenges. I love to meet people from all over the world. I like planes and airports, and I love hotels too! I get bored when I am at home too long.

In fact, being a lady in this area has some problems… for me, WC is the major problem! Very often the sites and venues have only WC for men, and they tend to be dirty. When my husband and I are on different gigs, and we keep missing each other.

I sleep and then I like to discover new places -like beaches, excellent restaurants, taste local beers and regional food…

I’m pleased to be where I am now. I really want to keep learning. My dream is to do at least one big world tour. My husband and I are thinking about moving to the USA for a couple of years to study and work.

Of course, I would love to work with other women. In Brazil, we only have a few women working with sound, especially live sound. We have a group on Facebook, the “Female Pro Audio,” in which we share with other women our experiences, job opportunities, and talk about sound! I hope it will inspire more and more women and girls to join our “sound world,” and help them overcome the barriers all newbies have. Being a woman makes it doubly difficult. We can always help each other.

The best part of my job is at showtime looking at all the people who are so happy and to think I am a part of this. It’s just amazing.

Kirsty’s message is about being consistent, persistent and open to opportunities. She says “It's great to have your heart set on a particular career in sound but don't be put off if that doesn't pan out at first. Once you know the fundamentals of sound, you can apply them to lots of different career...
Read the Full Profile

Victoria has worked in Live Sound for over eleven years and is currently on tour as a monitor engineer with  Jason Isbell & the 400 Unit and works with Sylvan Esso as a monitor engineer. In addition, she works for Big House Sound, Inc. and Sound Image.
Read the Full Profile

Amy Powelson goes where the work is and where the wind blows, working in professional audio for over 20 years. Amy most commonly works as a FOH engineer for corporate and broadcast events, and as a monitor engineer on festivals.
Read the Full Profile
We use cookies on our website to give you the most relevant experience by remembering your preferences and repeat visits. By clicking “Accept All”, you consent to the use of ALL the cookies. However, you may visit "Cookie Settings" to provide a controlled consent.
Cookie SettingsAccept All
Manage consent