Independent monitor engineer Becky Pell has been working in live sound for the past 25 years. Currently on a world tour with Westlife, her mixing credits include Aha, Anastacia, The War of the Worlds, Muse, Take That, Il Divo, Kylie Minogue, Bill Wyman, James Brown, Jennifer Lopez, Sarah Brightman and Natalie Imbruglia, as well as being house monitor engineer for several years on the main stage at the world’s largest festival, Glastonbury. She started out as an apprentice at London PA company RG Jones, where she worked for five years and mixed events such as The Queen Mother’s 100th birthday banquet, and investiture ceremonies at Buckingham Palace for Her Majesty the Queen, before going freelance. In her early freelance years Becky was monitor and RF tech on tours including Kylie Minogue, Travis and Black Crowes.

Becky went to her first concert at age 12 and found herself sitting behind the FOH guy. She was spellbound, “I didn’t know whether to watch the band or him! It suddenly dawned on me that there was a whole industry behind this music that I loved, and it looked WAY better than a ‘proper’ job. From that moment on, all I wanted to do was be a sound engineer. 18 years later, in a rather lovely ‘full-circle’ twist, I wound up doing monitors for that very same band for five years.”

Becky has worked for an impressive roster of A-level artists, but getting to the top of her profession didn’t happen overnight or without a lot of hard work. “I didn’t have a clue how to get a foot in the door and knew no-one, but I found a college course in studio engineering and figured that was a start. After I graduated, I got hold of a copy of the industry bible at the time, The White Book (this was pre-internet), and wrote to pretty much anyone who I thought might be relevant, to very little avail. I did a little work making tea and cleaning tape-heads at a couple of studios, but it was live sound that I wanted to get into. I got an unpaid ‘dogsbody’ position at Glastonbury festival in 1995, which fueled the fire to succeed even more.”

Be prepared to go where the work is

After she saw an add, ‘sound engineer wanted,’ for London PA company RG Jones in The Stage magazine, Becky took a chance and applied, knowing full well she was under-qualified for the position. “Simon Honywill and John Carroll, to their immense credit, decided to give me a chance – female engineers were pretty much unheard of back then – and invited me to London for an interview (I was still living in the north of England at the time). They said that whilst I certainly was under-qualified, they were looking for an apprentice and was I interested? Obviously, I pretty much bit their hands off at the chance! I moved my life to London and started work five days later.” Becky also credits Bruce Springsteen’s engineer, Fred ‘Gumby’ Jackson, who she worked with at the RG Jones, as one of her mentors. 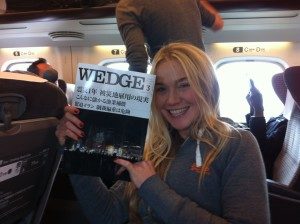 While working for RG Jones, Becky “cleaned a lot of cables, loaded a lot of trucks, and bit by bit was allowed to start getting my hands on the gear. It was a fantastic grounding, and I highly recommend that route to anyone wanting to really learn their chops. I stayed there for five years, and then, having learned a lot and gotten to know a lot of people in the business, went freelance.” Her first tour was as Monitor Tech with the Black Crowes.

Three of the most important lessons Becky has learned are: 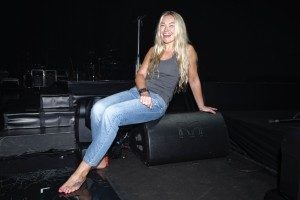 Becky loves traveling the world and “the camaraderie of a crew of great people who are top-notch at their job but can also have a laugh with it. And working with my first love music.” “I did a theatre tour last year that was a lot smaller than most I’ve done in the past – band and crew were all on one bus, the whole production on one truck and it was some of the best fun I’ve had in a long time! Naturally, I get a huge buzz from stadium shows, but for this tour, we had such a great team that it really was like a family, all for one and one for all. The people are, ultimately, what makes or breaks a tour.” Still, as most touring folks do, Becky finds it tough being away from loved ones for extended periods. Also, being freelance makes it impossible to commit to personal arrangements far in advance.

Favorite day off activities while on tour include checking out the local area. “I get a map from reception, so I can find my way back, and just take off in whatever direction appeals to me. European old towns are a particular favorite for exploring. Then I’ll go back to the hotel for a few hours in the afternoon and do some yoga, before gathering a few fellow roadies for a delicious dinner – I love trying local specialties.”

Becky’s list of must-have skills for being a monitor engineer?

Advice Becky has to offer young women entering the field-

Touring is a pretty rough and ready environment, so as a younger woman on the road you have to learn not to be over-sensitive about the inevitable silly comments – just learn to give as good as you get, because it’s often a test to see how you’ll respond, and not meant with any malice. I found that by mucking in and working hard, being good-humored and friendly, I was quickly accepted into the fold.

Like anything worth having, it’s hard work, but it’s SO worth it!

Be prepared for long days and getting your hands dirty, and don’t be surprised if it’s years before you actually start mixing bands. Good things take time.

If you don’t understand something, ask. Most people are happy to share their advice and experience.

Learn to give as you as you get with the banter – most of it is not meant to offend. You may encounter a few sexist attitudes, but we don’t let people like that get in our way, we just prove them wrong! Don’t have a chip on your shoulder about being female – just get on with your job, don’t make a big deal of it, and other people will follow suit. Remember: we teach people how to treat us.

Dress appropriately, but you don’t have to become a pseudo-guy. It’s ok to be a woman. Better than ok!

Above all, have fun with it – it’s one of the most exciting, adventurous, and satisfying ways of life you could ever have. You get to travel the world, meet wonderful people, and work with music – for my money; it doesn’t get much better than that!

If you’d like to learn more about Becky Pell, check out rocknrollyogi.com

Staying Fit on the Road 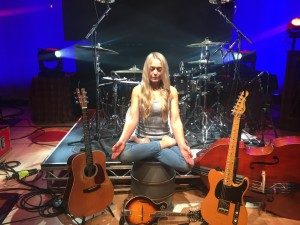 Along with being a Monitor Engineer, Becky Pell teaches yoga and meditation to many of the bands and crew she works with. She has found that there are many parallels between the two jobs. Check out her recent blog on the topic: Same fit different way- why my two jobs are one and the same.

“In both roles, I’m creating a comfortable environment for the people I’m working with, whether that’s an audio environment or comfort within their body and mind. Trust is key in both roles – the artist or student is placing their confidence in me, so it’s all about them feeling safe. Good communication is vital for both – interpreting what someone really means when they struggle to articulate what they feel or hear. And setting up strong foundations applies strongly for both as well – whether that’s physical alignment or good gain structure! On a personal level, I find that my yoga and meditation practice really helps me to stay calm and grounded in any situation, which is a great tool to have during gigs.” 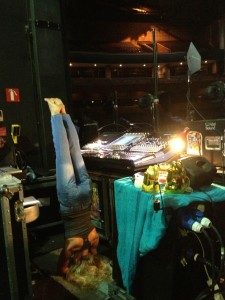 Touring life is hard on the body. Yoga and meditation help Becky stay fit on the road. “I find an empty dressing room when I get off the bus and do an hour before I shower and load in. If we’re traveling with caterers, as is the norm in Europe, then it’s usually pretty easy to eat healthily. When it’s local catering, which can be hit and miss, I head to Whole Foods on a day off and get a stash of healthy food for the bus, and that way I’m covered if catering is a deep-fried disaster. It’s also a good tactic for avoiding the siren call of late night pizza! I do like a beer or a glass of wine after the work is done, but I try not to drink on consecutive days, and I keep it to a couple of drinks when I do. “ Becky’s guide for getting healthier on the road.

Michelle Sabolchick Pettinato: A love for music, adventure, and traveling led Michelle to a career in live sound. She is a co-founder of SoundGirls.Org and blogs about life on the road, and what it takes to succeed in live sound.