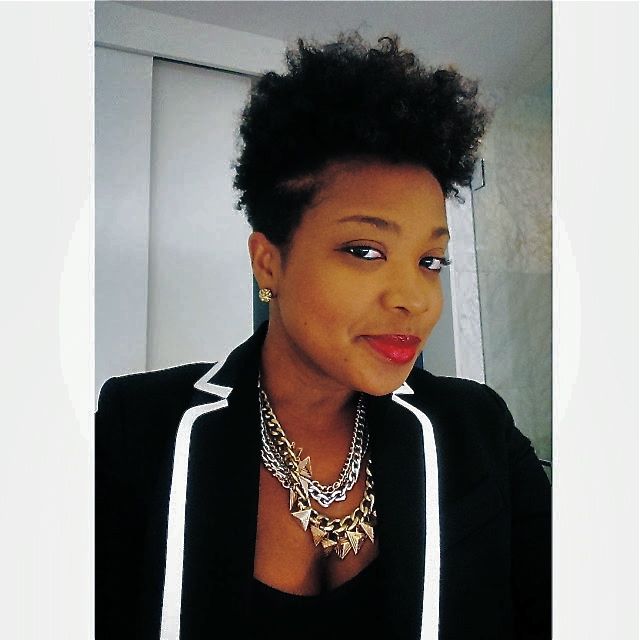 Amanda Davis is an independent sound engineer based in Atlanta, GA. She graduated from Roosevelt University with a BA in Vocal Performance in 2008.  She went on to attend SAE Atlanta, where in 2010 she graduated with an associates degree in Audio Technology. She recently joined the Wondaland team, and is currently the FOH Engineer for Janelle Monae.

After graduating from SAE Atlanta, Amanda found that interning at local studios and teaching at SAE Atlanta was just not cutting it income-wise. She found herself drawn to live sound for another source of income.

“When I graduated from SAE a friend of mine cold-called churches to see if any of them needed help in their audio department. He got a call back from a church here in Atlanta and just took me along for the interview, and they hired us both. I’m fresh out of audio school with NO experience, and they hire me to be the FOH for their contemporary services! I also was responsible for some A/V tasks as well, but my main responsibility was the two services on Sunday mornings. I just took everything I learned at school and my love for music and applied myself. I’m still there four and a half years later”.

Amanda found the transition to live sound was not that hard, “I was interning at studios, working at SAE, the church, and local clubs so I kind of blended the two. I would apply mic placement techniques I learned in the studio to my live gigs. Some compression ideas and things like that. I had no other reference, being in the studio really helped me. Some things worked and some didn’t. I was learning as I was working”. 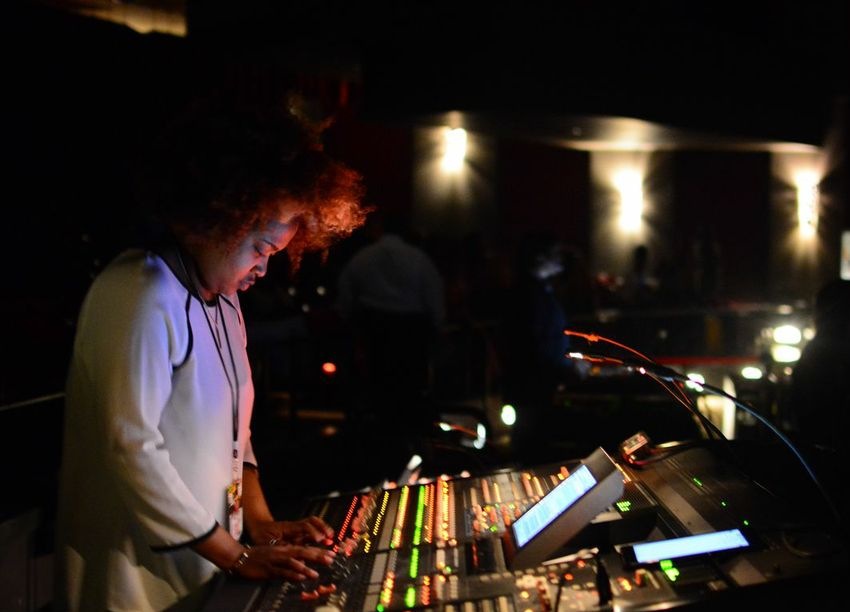 She soon discovered that live sound was the career she wanted to pursue. Amanda says once she put her mind to it there was no looking back, and she was determined to make it happen. Live Sound is now her focus, and she plans to continue touring as a FOH Engineer, for as long as she can. Being only 28, that looks like it will be for many years.

The Wondaland label is a collection of artists that all have a desire to control their music and art, and how they choose to express it. Monae has definitely taken control of her music and art and is very much in control of her image and message. Monae brings this control into her live production as well. When it was time to hire a sound engineer, Janelle went to her team and expressed her desire to hire a woman for her FOH engineer and very persistent. Amanda went to high school with Janelle’s musical director and tour/production manager, and he asked Amanda to send over her resume. Amanda interviewed with Janelle and Nate Wonder and got the gig. Amanda has also worked with another artist on the Wondaland label, Roman. Roman opened up for Janelle on the Electric Lady Tour and Amanda mixed FOH.

Monae’s live production consists of a nine-piece band and playback. The venues range from 2000 to 4000 capacity standing room only theaters to arenas and European Festivals. Monae also opened for Prince at the Super Dome in New Orleans. Amanda says that Janelle’s audience is one that is very diverse.

A typical show day while on tour is about 12-15 hours at the venue. Load-in takes about 3.5 to 4 hrs. This includes popping the trailer, laying marley, building risers, putting back line up, pinning the stage then soundcheck.  For festivals, it’s a bit different. We have to build on the side of the stage, do a line check, no soundcheck, I have dB limits to worry about, and we have to be a bit more conscious of time. A head-lining show is between 60-75 minutes. For festivals, it’s about 45-55 minutes. Do the show,  break down my console then the stage, load the trailers and off to the next city to do it all over again.

Amanda is using a Sennheiser 5200 with an MD5235 cap on it. She explains “Janelle’s voice tends to make 1k ring out so I just automatically dip that out on a graphic EQ. Janelle has a good mic technique and a wide range of dynamics in her voice, so I use a compressor to just catch the peaks. The stage consists of 48 inputs, for the band, playback, and Janelle’s vocal. Amanda uses a Yamaha PM5d or CL5, utilizing the processing and efx in the consoles. On the CL5 I have an 1176 plug-in inserted on her vocal”.

The two background singers are on SM57s, due to the stage set up. “The background singers are right in front of the drum kit, with no drum shield, so we are trying to cut out as much of that as possible”. The monitor setup is not that complex, everyone on stage is using iems. They are using Sennheiser G3 IEMs and a pair of DS wedges for Janelle, a single wedge for the guitar player and side fills.

Monae brings her sense of image and design to the stage, Amanda explains the stage design.“The stage had to be completely white. White pipe and drape, white backline, white XLRs, white marley on the floor of the stage, white mic stands, white truss for lights. … WHITE!!!! It was to give the allusion of an asylum. When we do our one-off shows we still try to stick with the white minus the pipe and drape and truss”. 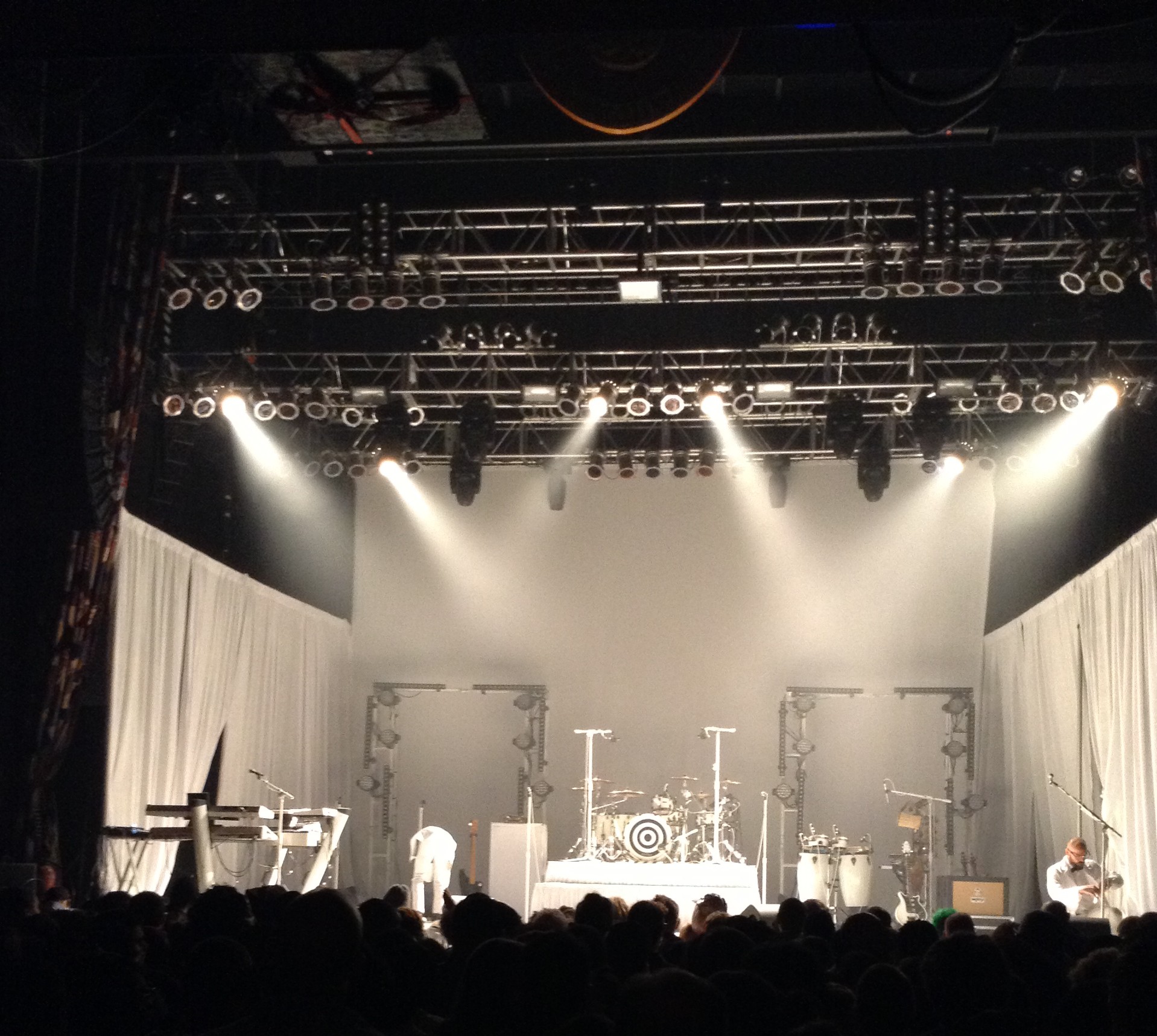 Amanda loves the travel aspect of touring, learning and experiencing new cultures, but admits it can be tiring. Amanda says the reality is that it can be very taxing on the body, and in some countries, the food is not always the best, but she is not complaining. On her days off, she likes to get caught on sleep, try the local cuisine and explore the city.

While Amanda has encountered the “good old boys club mentality”, she has only encountered one instance where she really had to assert herself to be heard and respected. Amanda feels that the combination of her age and being a woman is always a shock when she calls to advance shows or arrives at the gig. Amanda says, “I just do my job and keep it moving.”

Two things that Amanda has learned while on the road:

It’s not about me and attitude is EVERYTHING. If you walk into a venue with a chip on your shoulder then of course you’re not going to have a good day because that’s the type of energy you’re giving off. Just because someone has an issue with the fact that I am a female FOH mixer doesn’t mean I have to take on their issues. I am there to make sure concert attendees enjoy a great show, and that’s the main goal. You HAVE to keep a good attitude and, as my mom says, keep the main thing the main thing.

Amanda’s advice to women wishing to pursue a career in live sound is to keep going.

It is a LOT of work and it’s not a glamorous life at all. Learning on the job is the best way to learn, and I say that from experience. Also, be nice. I’ve gotten a lot of jobs simply because I was pleasant to be around. It goes a long way. You’ve got to know your stuff, but a lot of people in a position to hire look at your disposition and attitude”. Next to having technical skills, Amanda feels that it is just as important to possess people skills as well, “People have this thing mixed up if they think you don’t need people skills to survive in this business. You HAVE to know how to deal with people and ALL the different personalities you will encounter”.

Amanda has also worked as the monitor engineer for R. Kelly. “it was my very first time doing monitors, and I was terrified!! Darcy Khan, a friend, and mentor put me on the gig and helped me to prepare for it. I was on a PM5D with Sennheiser G3 IEMs. 8 wedges across the DSE on one mix and side fills on one mix. Small input list, 8 channels of playback, couple wireless vocal mics, TB mic for MD and stereo input for video playback. While she learned a lot and had fun, Amanda prefers doing FOH.

Amanda Davis on The SoundGirls Podcast

Leslie Gaston-Bird is a freelance re-recording mixer and sound editor, and owner of Mix Messiah Productions. She is currently based in Brighton, England and is the author of the book "Women in Audio".
Read the Full Profile

Sarah Welsh – It Runs in the Family

Sarah Welsh was born into the world of sound and at age thirteen is possibly the youngest girl working in audio.
Read the Full Profile
We use cookies on our website to give you the most relevant experience by remembering your preferences and repeat visits. By clicking “Accept All”, you consent to the use of ALL the cookies. However, you may visit "Cookie Settings" to provide a controlled consent.
Cookie SettingsAccept All
Manage consent