Alesia Hendley – From Live Sound to AV & IT

Make Audio Work for You – Don’t Work for Audio. 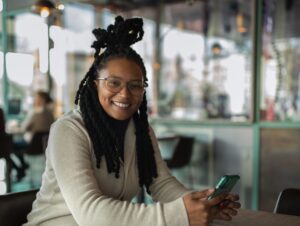 Alesia Hendley’s introduction to audio started with a traditional path. She learned about sound at her dad’s church in Connecticut and decided to study audio at a trade school in Texas after her family moved there. Even though the program was focused on music production, her career focus at the time was still live sound.

Alesia recognized she needed to get her hands on live soundboards. “When I was in school, I got to work with SSL consoles and it was amazing, but I knew those boards weren’t at venues. I couldn’t walk into these places saying, ‘I’m an audio engineer, but I have no experience with the consoles you have.’” She kept note of boards she saw at local venues, searched the Guitar Center stores in the area to see what consoles they had, and got some hands-on time at the store. “One of my classmates actually had a job at a Guitar Center. I’d go in and get some work in. We were bouncing ideas off of each other and improving together.”

While in school, Alesia created a music label and a publishing company, but it was a major challenge to make a business out of it.“Everybody’s doing their own thing. I was an audio engineer with nobody to record,” She said. “I’m not making any money here. So what the hell am I gonna do?”

She tried a few avenues for freelance gigs, saying yes to everything (including sound for hotel events and church services). She applied and got an interview for a part-time job opening at a multipurpose facility, even though she needed full-time work. “The technical manager should have never gave me his card because I kept calling him and was like, ‘I’ll take anything. I’ll take four hours a week. I’ll do whatever.’ That’s how I started. They brought me on part-time, and I just kept building up the hours. They saw what I can do. Six months later, I was full-time.”

The facility was a stadium, arena, and conference center for the school’s district’s major events (such as plays, football games, proms, and graduations). She started seeing audio outside the “traditional” box she had learned it in. She explains, “When I started exploring the other components of AV, I found all of these spaces and verticals need audio. Even though it’s not just me running front of house, I can still be a part of creating this overall experience, which is what I love about audio anyway. When you’re behind that board at front of house and you’re doing a gig whether it’s a band or a play, it’s just a rush. So I wanted to fill that rush, no matter what part of the experience I was in.”

Alesia recognized a major need related to audio: people who also understood IT and networks. “All these digital consoles – it’s all connected to a network. The network goes down, and nobody on our AV team knows how to fix it. We had to call the IT team of the school district, which was a language barrier because traditional IT doesn’t really like to play with our AV stuff. They don’t want the AV stuff on their network. So, the IT team had a learning curve as well.” She realized, “If I don’t learn networking, I’m going to be out of a job in this AV thing sooner or later.” Alesia took a risk, and applied to Access Network, a company she had been interested in for some time. “It’s basically an IT company, but everybody that works for this company is an AV person. They’ve been an integrator in some form or fashion.”

She landed a job. “What we do is we design networks for AV solutions. Everything lives on the network. About 85 to 90% of what we do is in the home because our clients are people who have home studios or have smart homes. The other 10% of what we do is on the commercial side, where you’re in those corporate environments, where there’s Dante, Shure ceiling microphones. So it’s been very, very exciting to constantly pivot but let audio lead me through all of these different roles.”

She finds her company is welcoming to diversity. “Don’t get me wrong – I’m still surrounded by men because we’re in technology, but there’s more discussion of being diverse. They’re more open and more welcome, instead of you running into the knucklehead behind the console that doesn’t want to move aside because he’s front of house – he’s the sound guy.”

Alesia still has “traditional” audio in her life, including a podcast about a personal interest, digital signage. “I’m still creating. I host it, I create all the content for it, I do all the recording. Me and my team, we do the editing. We created the intros and outros. I still have a home studio, because now I can afford to invest in a home studio.”

On Pivoting out of Live Sound

It was a bunch of soul searching. It did take some time. I stayed in my facility job for an additional two and a half years. It takes time to really do that kind of soul searching and figuring out what is the next step to help you pivot.

Of course, I miss running front of house, but my pivot was for education. I needed to learn about a network. I didn’t want to just go join a random IT company, and they weren’t going to hire me because I have no IT background. I needed to get with a company that understands that IT needs to talk to the gear that I love.

I started off with Dante. That was my first touchpoint with audio or AV on a network. When I transitioned to this company, the education continued to roll in with this company. They paid for a lot of training. The education came within that package.

Bringing AV, IT and Audio Together

I’m a SoundGirl at heart. I love audio. I love everything about it. But what I realized is I had to look at the bigger scope of this experience that I loved creating. That led me up to the point where I’m at now, doing the IT side of this AV/audio lifestyle.

I have people ask me all the time, ‘Do you miss running front of house? You do nothing with audio now.’ You can look at it that way, or you can look at it: I’m the person who’s orchestrating the sound that people experience. They need the network that I’ve designed. Without it, it’s not going to work. So, it’s about perception. Change the perception of it and try to look at it in a different sense that’s more positive versus ‘I’m losing something.’

At the end of the day, you’re not pressing the physical console buttons, but you’re pressing the overall button. Without you, it doesn’t exist. That’s a huge button, like, the biggest button on the console. You’re still creating this experience.

Honestly, so many people don’t even know this exists. I had to randomly find it. This is years and years of time being put in to do something that is different.

On how AV work is creative

My work is still creative because of the things that create the experience. It needs us. It doesn’t exist without us. Yes, I would love to be mixing for whoever my favorite artists at the time or running Front of House. That is more creative, and that is more goosebumpy. But my focus was, where’s the industry going? If we don’t learn how to pivot, then we’re stuck in these positions. I was an audio engineer with a studio background, but there was no money in that vertical for me. There’s nothing wrong with doing what you love, but you have to have a balance of creativity and money flow.

Make audio work for you – don’t work for audio.

We all have the odds against us. Don’t let it dumb down your greatness. Just realize that the odds are there, work three times harder, get gritty and find ways to freakin make it work. Keep knocking down the door as much as you can, like, keep kicking it open until something happens.

Don’t just latch on to the microphone or the soundboard. Explore what these things lead to, or what they create. There’s just so much opportunity. At one point, I felt like I didn’t fit into SoundGirls anymore. I’m not mixing music. I’m not doing this stuff, so maybe I’m not a sound girl. Then I was like, wait a second – You’re pulling the strings here. You’re doing sound, just in a different perspective, in a different way, and it works.

Figure out your little milestones. You can have a goal, but what are your realistic goals in between? And if you focus on that, you’ll find your career path and you’ll grow a lot faster – instead of stumbling into it like many of us have done.

None of this happens overnight. I hated loads and load-outs, but I don’t regret one bit of it. I got a little muscle on my arm. I learned how to hold my own. I learned from people who had been in the business for 20 years. That groundwork is what matters the most, so don’t run from it. Don’t be like, ‘I hate load-ins and load-outs. Stick with it for a while and see what happens.