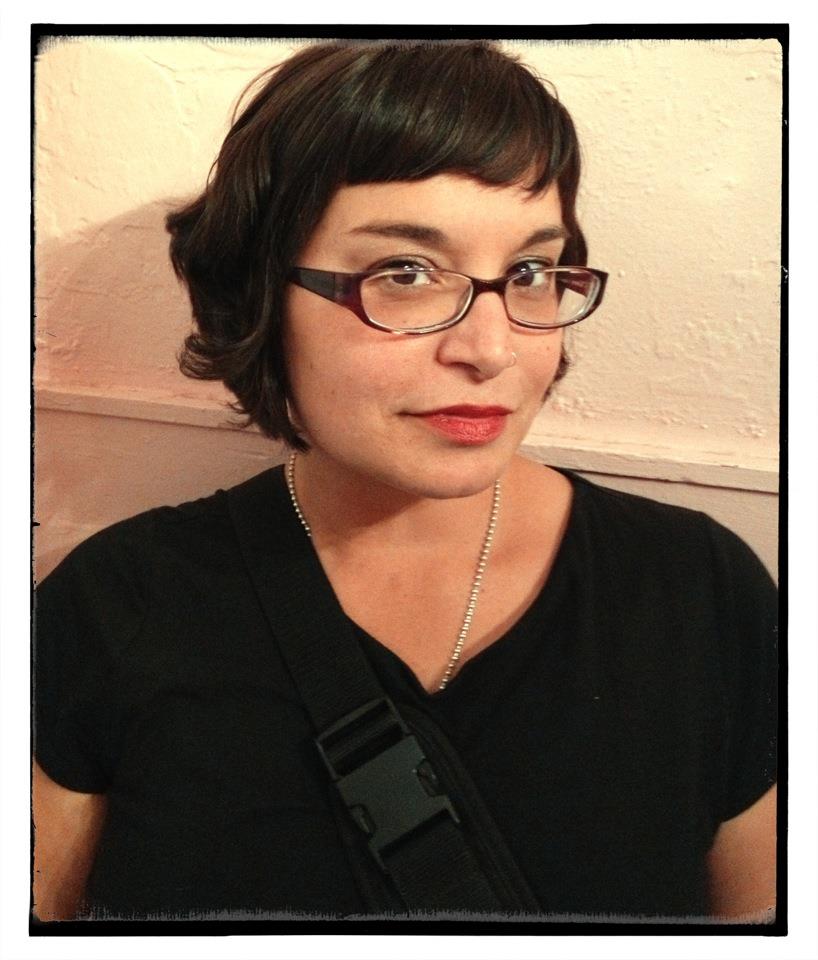 In 1992, I was on tour with Pearl Jam. We had been on tour crisscrossing the U.S. for the past two months. Ten, their debut album was starting to blow up, and by summer you would hear Alive, Even Flow, and Black blasting from car stereos, out open windows, and on every station is seemed up and down the FM dial.

One of our gigs was at the University of Colorado at Boulder. We had an army of college volunteers that were eager to help set up, although one young woman that was assigned to the sound crew stood out. She would turn out to be one of the best local hands we had all tour and a life-long friend. We would also learn later that Kim had never worked a show before.

Kim’s recollection of that day –

I remember being at a party the night before. We had on MTV, and they had Pearl Jam on. I remember looking at the TV and saying “ Hey, that’s the band I’m working with tomorrow.” The next day I was assigned to the sound folks.  I had no stagehand or sound experience. I wasn’t going to college there; I just wanted to see free concerts, so I signed up to do security. I hated it because they would put you outside or in a hallway, and the patrons didn’t exactly like you because you were security.

I couldn’t believe there was a woman doing monitors. I was super excited, and I had a great time working with them that day and it made me seriously consider going into sound.

Kim would go on to sign up to work with other productions at the university and would begin on a path that would lead to a career in sound. She was working as a stage-hand at the University and as a coffee barista when a friend visiting from Los Angeles suggested she move out to LA, as that was the place to be for working in sound. Kim figured she had nothing to lose and packed up her 68 VW bug and headed to Los Angeles.

Kim made her way to Los Angeles during the winter of 1993 in a VW bug that had no heat. She spent the drive dressed in many layers and wool socks. She would switch back and forth with her feet on the gas pedal and on the floor where the heat of the engine was really hot. Upon arriving in Los Angeles, she started to hit up sound companies for an internship.

No Show Sound, later to be known as Industrial Sound gave Kim an internship and she secured another job as a coffee barista. Kim remembers Greg Dean’s sound boot camp. “He would hold up cables and ask what it was, what it did, and where it patched. It turned out to be an xlr cable, and I was so intimidated I didn’t know where it went. I will never forget that moment”.

Ronnie Kimball, currently FOH for Bad Religion would take Kim under his wing, and she would spend most of her time working shows with him. Kim says they worked so many shows, but one of them stands out. It was a Truce Jam in East LA, (in 1992 there was a historic truce between the Crips and the Bloods, it eventually broke down as the City of Los Angeles walked away from their promises to help rebuild South Central after the Rodney King Riots) the concert as its name implied was to celebrate the truce between the gangs.

This experience was entirely new for Kim.

I was still a little mountain hippie girl and oh so new to the big city. When we arrived for load in the stage wasn’t quite built, so we sat around and waited for a while. It finally gets finished, and we start building the PA, FoH and monitor world. I notice we are the only white people there, and racial tensions are still high from the recent riots. The event was poorly organized, and security was provided by the Nation of Islam. I had a Leatherman that they took away from me and told me they would give it back to me at the end of the show.

So the concert starts. The had a cleansing ceremony with a Native American blessing with sage. While a band is playing, I look up to see the crowd parting ways and a guy carrying a folding chair chasing after another guy. People ran backstage, everywhere leading to the cancellation of the show. I remember some people saying damn whitey’s ruining the show with the sound. Everyone was saying it was the white guy’s fault and blaming the sound guys. It was some scary stuff.

Kim would eventually make her way to San Francisco where she knocked on the doors to the Warfield. There she met the late Paul Majesky, the production manager for the theater and presented her case to why he should hire her. Kim still had a limited resume and lacked experience, but Paul took a chance on her. Kim would spend several years working at the Warfield and occasionally still works there. She would also start working at other Bay area venues such as the Shoreline Amphitheater, Slims, and The Fillmore.

In 1998, Kim was hired by Grant Lee Buffalo as a monitor engineer and drum tech for a short tour of Australia. Kim did not have experience as a monitor engineer or drum tech. She had no clue how to do monitors or even how to tour. She convinced the sound guys for Big Day Out to mix monitors for the band, and somehow faked setting up the drums. Kim says it became evident that she had no idea what she was doing and needless to say did not become friends with the drummer. Miraculously, she survived the tour and became friends with Grant Lee Phillips.

Grant would go on to recommend her for a sound gig at Cafe du Nord.  The “Monday Night Hoot” series at Cafe du Nord is named for the hootenanny movement of the ’60s. Kim would learn to mix during this Monday night folk series on a small Allen Heath board set up on the side of the stage. She would work at Cafe du Nord until 2007 and become known as Audio Elf and Tough Love Griess. 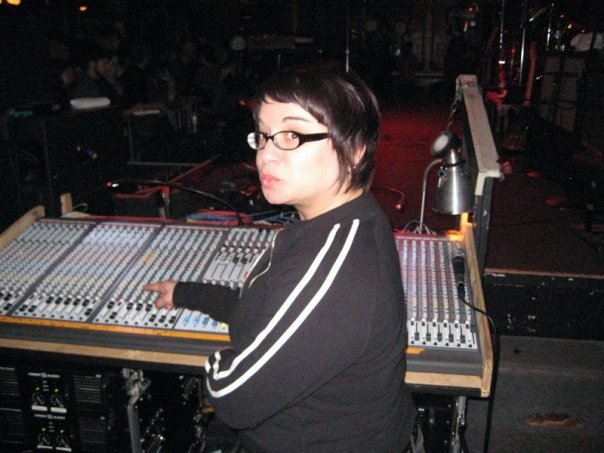 During this period, Kim also fell into a lot of TM/FOH work. She toured with several bands ranging from Arab Strap to The Cramps and Nada Surf to Chapterhouse. Kim says, “all of the bands sounded so different, and I loved mixing every single one of them. When you’re on tour, you get those songs in your head. You wake up with them and fall asleep with them. I love that I got to mix every night. It’s great to be able to add the effects where they were meant to be, bring up the solos and really be able to mix something. You get to feel like you’re part of the band.

As much as Kim loved being able to do FOH, she disliked the tour managing aspect of the job. Kim explains “I never wanted to be a TM. It was just a means to get to do sound. I am still willing to do some very small tours as TM/FoH, but I won’t go out and do any long and grueling tours like that anymore. I really didn’t enjoy TM ing as you are never off and it is one of the hardest and thankless jobs out there but I did the best I could. Kim would continue to tour as a TM/FOH  until 2010 when she was diagnosed with breast cancer. 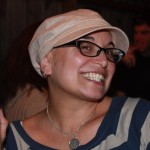 In 2010 I was diagnosed with breast cancer. This put a little damper on the work thing. I was offered a tour with Chapterhouse a band from the UK. I wanted to work the tour since it was going to be my last for a long time. I was the TM/FoH, and I had a blast. I was also asked to do one more four-day gig, in Hawaii with Dengue Fever. There was no way in hell I was gonna miss going to Hawaii. It was a beautiful visit with two shows and some fabulous free time spent sitting on a gorgeous beach. It was a wonderful way to come home and start four months of chemo, surgery and six weeks and five days a week of radiation. I have been cancer-free for four years.

I didn’t work for over a year taking care of myself. I slowly started working at clubs again and have recently just done my first tour as FOH for John Doe. 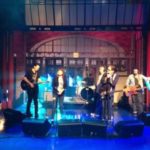 It was a pretty amazing realization I was doing sound for John Doe, that sexy bass player from X. You bet your sweet bibby I was gonna go out there. Getting a call from John was so surreal. I was honored to be asked to mix his sound.

We had gigs in many different types of clubs. Venues ranged from 300 to 500 seaters. I had to do monitors and FoH from FoH on every show we did. I didn’t mind so much. Some venues it’s better that I do monitors as some of the guys out there don’t care as much about the show.

The band and crew traveled in a van, and we all shared hotel rooms. So you have to be willing to spend every day together, you are thrown into a 24/7 situation with people. It isn’t easy, but it is part of the job. Sometimes to just get some free time to myself, I would take myself out to a nice Italian dinner and just sit back and relax. It’s good to make sure you give yourself some me time on tour. It’ll keep you sane. 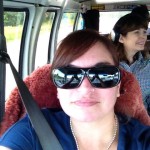 In the van – John Doe Tour

Kim continues to work in the Bay area with Sound on Stage, Delicate, at the Fillmore and as a member of the IATSE Local 16.

I used to work at Shoreline Amphitheater, Slims, Great American Music Hall and sometimes at Bottom of the Hill. The thing is I’m not getting any younger, and I had to start thinking about what to do for the future. I have benefits and make a living wage working with the union. I do miss working at all those nightclubs, hearing all the new bands and just how much fun it is, but you don’t really make that much, and there are no insurance benefits. So I sadly gave up most of the rock and roll lifestyle but not all of it. Good lord, I couldn’t give it up all the way. I think I’d lose my mind if I did. That’s what I grew up doing. I was 18 when I started in the “biz.”

Kim’s favorite gig The Stern Grove Festival has just ended for the season. The Stern Grove Festival is a ten-week series Kim mixes monitors for. The festival keeps her busy through the summer; typically prepping the gear at Delicate on Thursday and Friday, loading in and setting up on Saturday and doing the show on Sunday.  This year the festival opened their season with Smokey Robinson and closed with The Zombies.

So see, I still get to do some rock. I’m just doing a bit more corporate shows to keep food in my belly and keeping a roof over my dog Ollie’s and my heads. 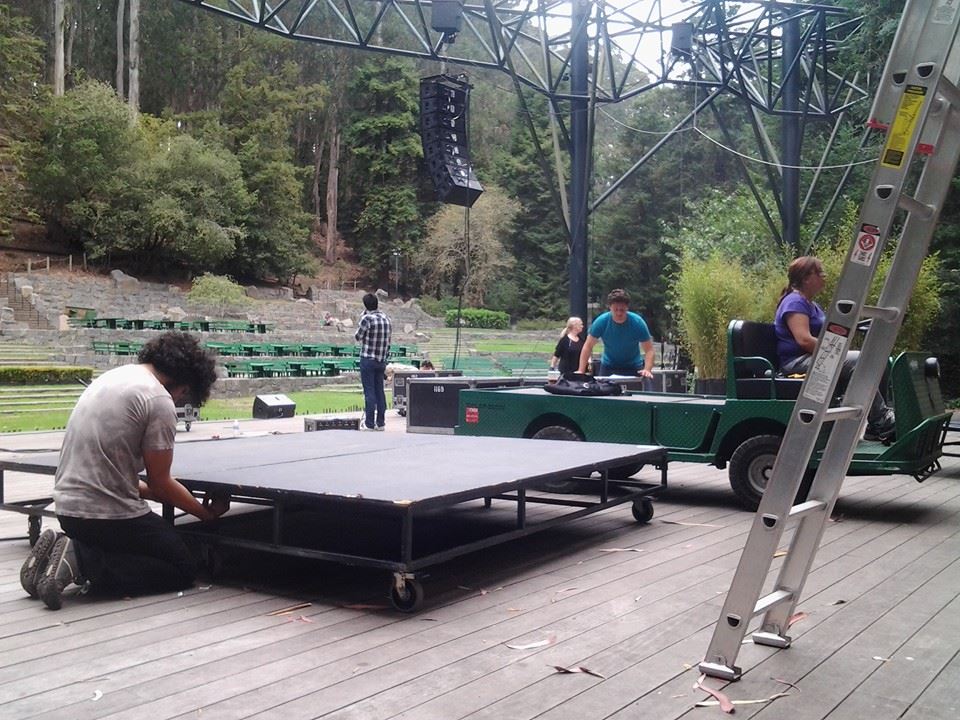 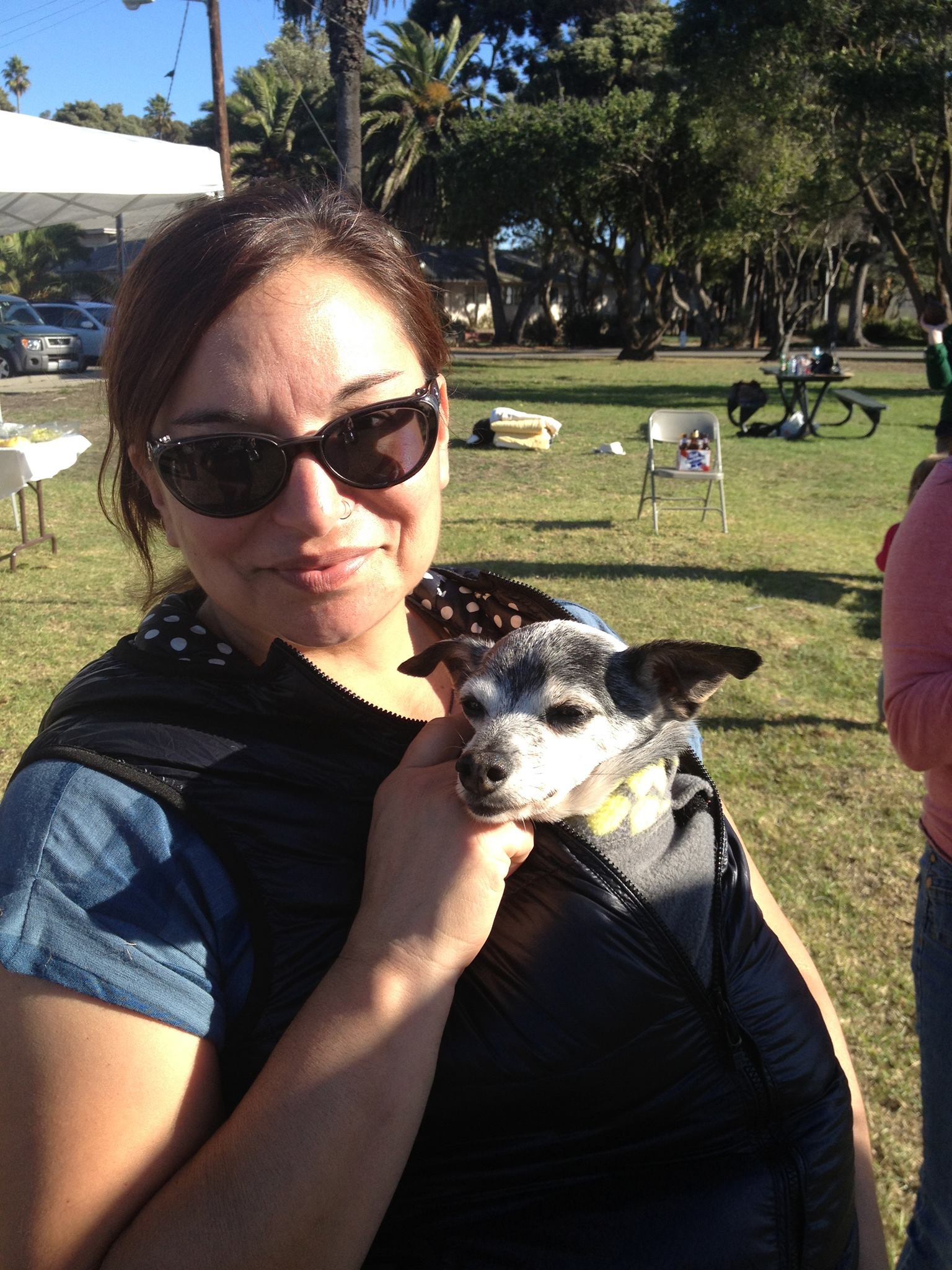 Britannia Row Training Program
Sexism – It's still an Issue in 2015