A Day in the Life

I really wanted the blog after my Aviation and Audio Part 1 to be Part 2…it makes sense right?

But as I was walking to our work shop the other day, I was chatting on the phone with a friend about the bizarre spectrum of things that can be a challenge to my work day. And then it occurred to me that it really does give some insight about what I do.  So I’m delaying Part 2 of Aviation and Audio  and instead giving you:

….all of which were experienced in the last two months and are not listed in any particular order. 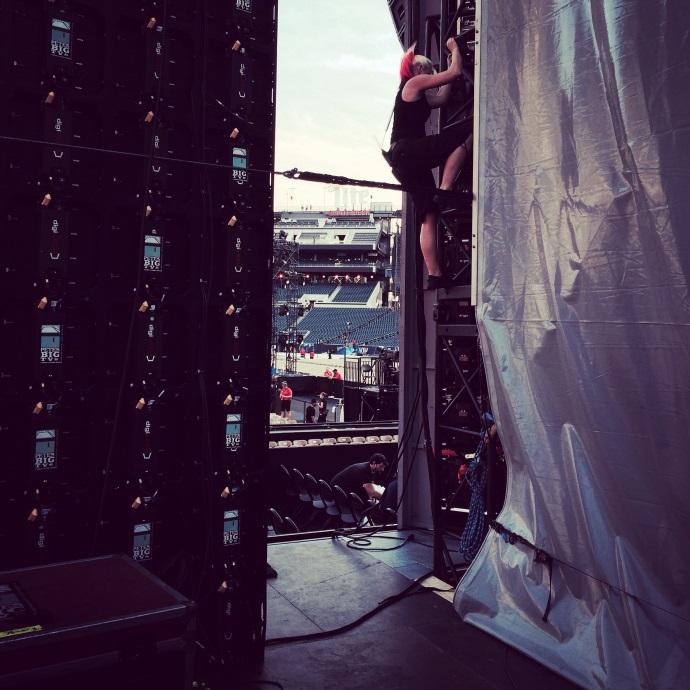 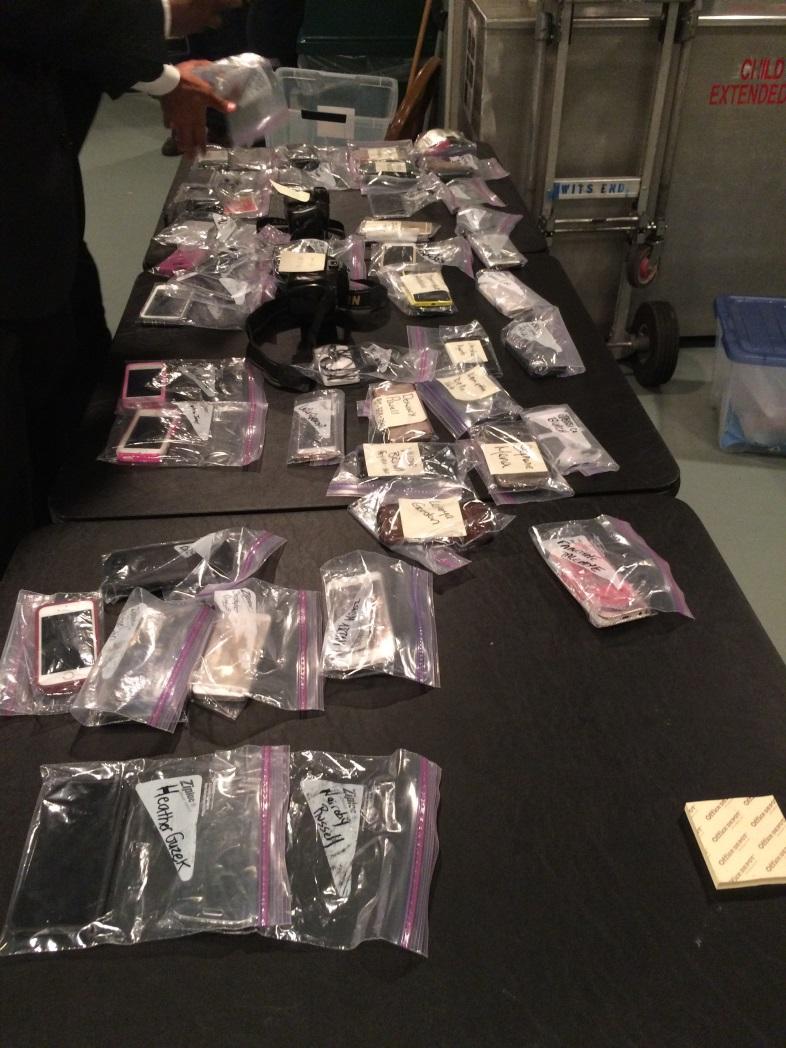 This is what happened to the audiences’ phones at the music video shoot. The production wisely didn’t want to have any footage of the shoot released early, but the skyline views of Manhattan from the boat were just too tempting for most people. 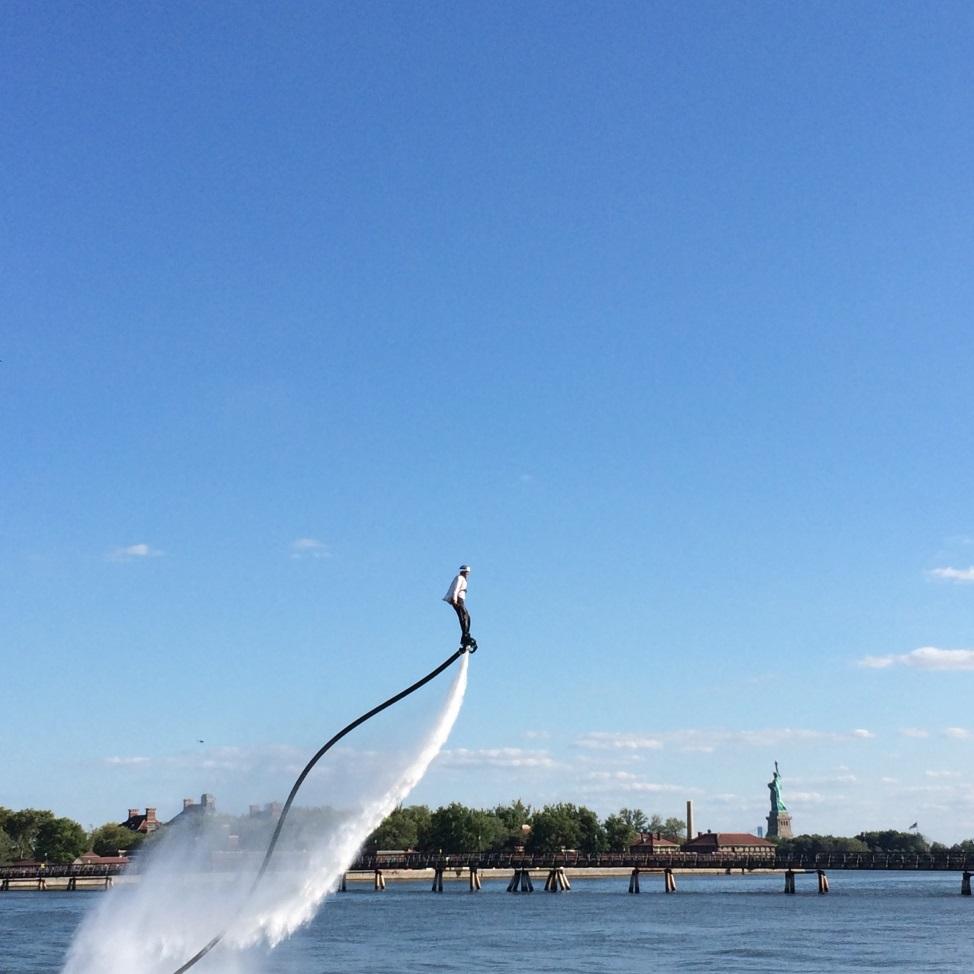 This was absolutely as awesome as it looks. This guy danced and flew around and went under water. 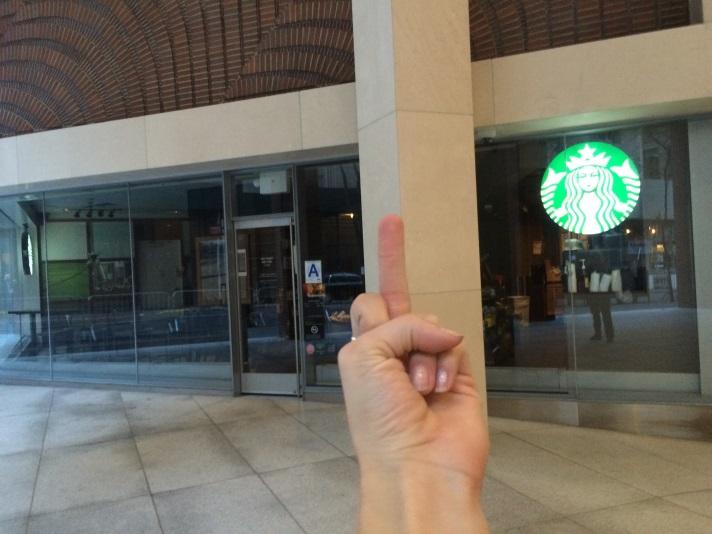 It took me 30 minutes and walking 3 blocks to get through the security lines to a Starbucks that’s 50 feet away from the stage door of the Waldorf that I exited….and it was closed. 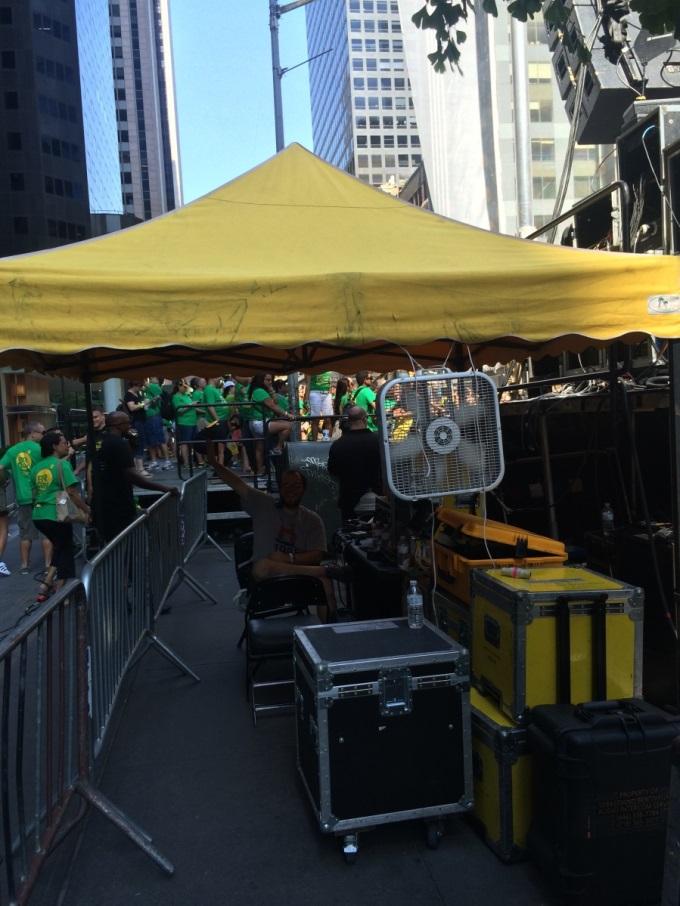 I call this my ‘Beyonce Fan’, good for staying cool at outdoor gigs like Brasil Day, and also for making my hair look rad in the wind like Beyonce’ 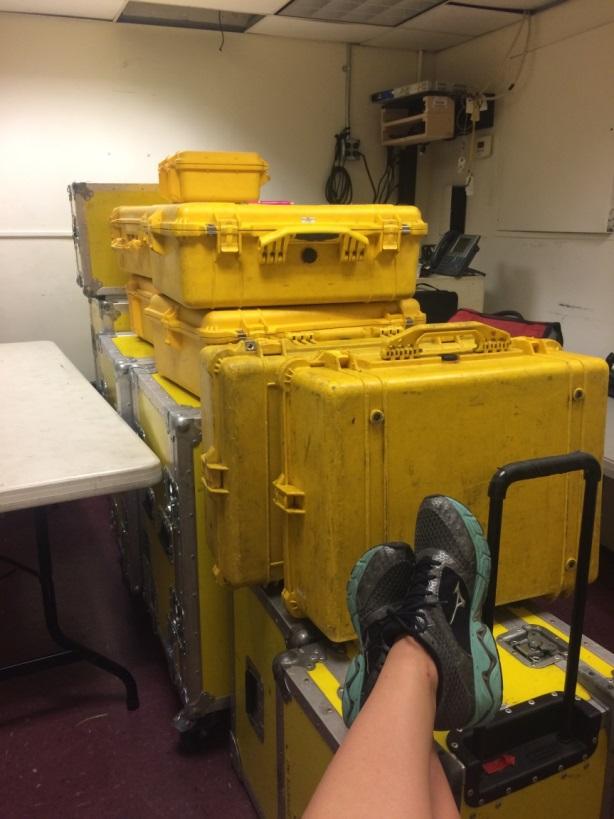 Me sitting around in comfortable shoes waiting to get out the door….patiently waiting my turn 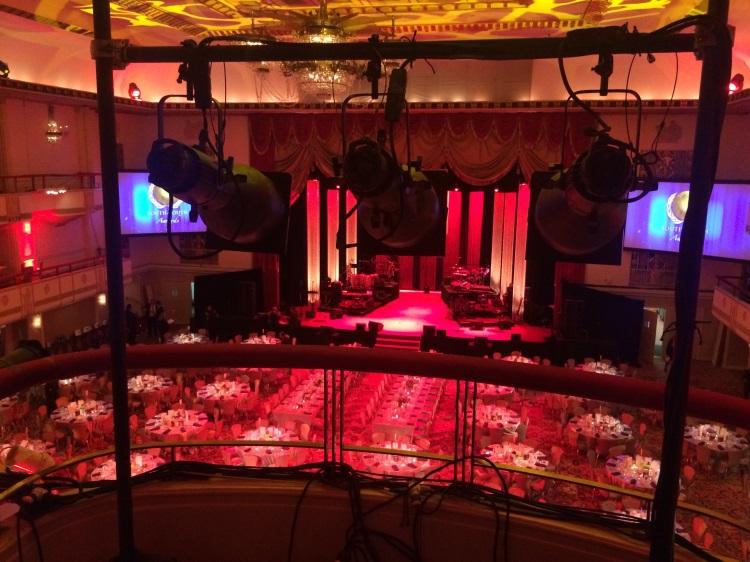 I was thrilled to be on the 3rd balcony at the Waldorf, far away from food smells and hidden from view. Sheila E performed at this show and it was awesome! 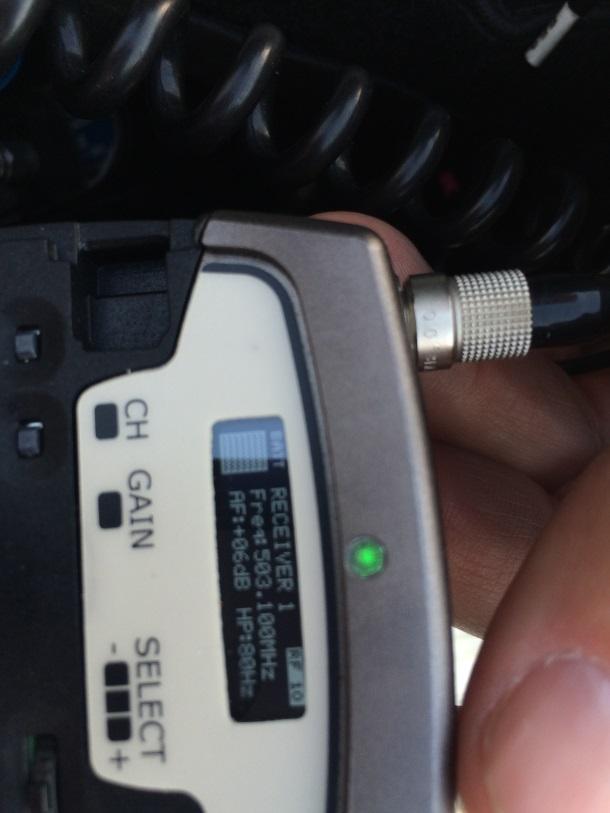 My phone is full of crooked and blurry photos of the ENG gear that shows up.   I reference my photo to coordinate their wireless equipment when I get back to my computer and analyzer.

So those are some of the random challenges that I might come across on any given day.

I’m a hyperactive optimist and I always say that challenges are just job security, which is probably an obnoxious thing to say, but I honestly feel that way! If it was easy, and all anyone had to do was flick a switch, we’d all be out of a job. The list above is not a list of complaints, it’s just bizarre sometimes to sit back and think of all the big and little things that can make a difference in my day.

An equally important footnote to the list above:  it’s the amazing team of people I work with that make it possible to overcome challenges. It’s a big team and includes all sorts of people involved with the show, not just the comms or audio people.  I’m thrilled every day to be working as part of the team making shows happen. I just have to remember to tone down the hyperactive optimism first thing in the morning so my teammates don’t add me to their Incomplete, Ever-Growing-List-of-Challenges-Impacting-Their-Day 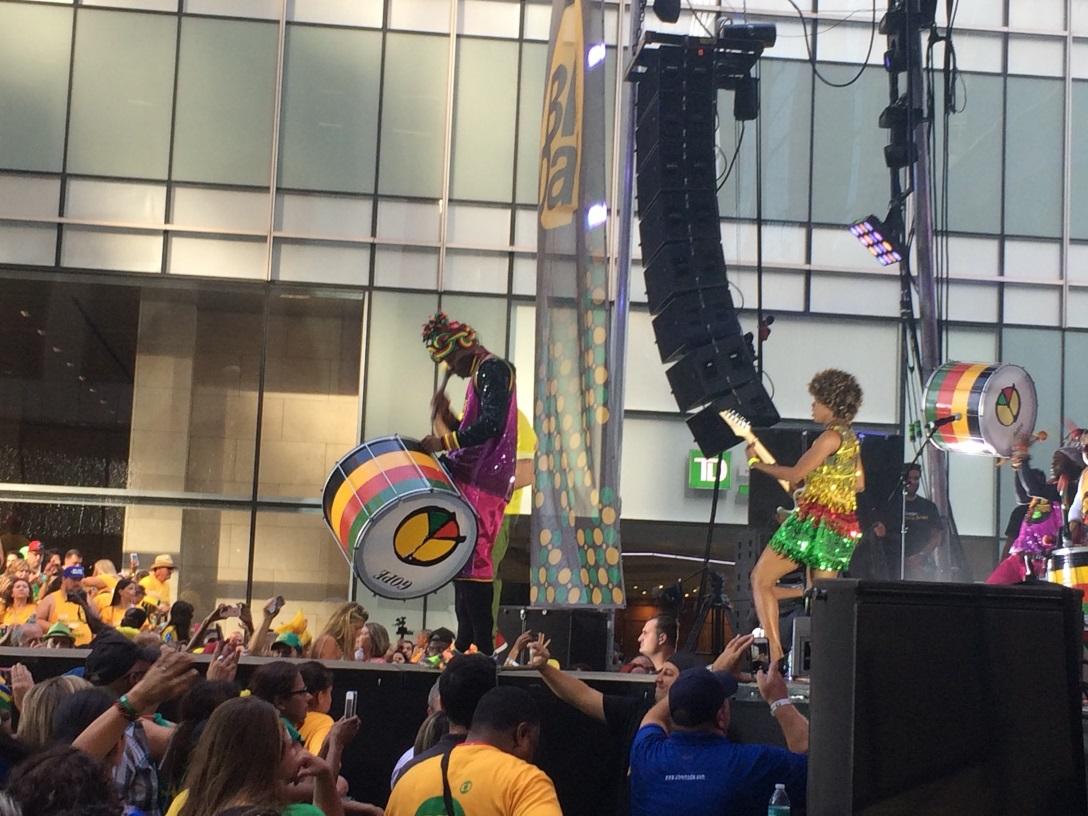 Another colorful photo of Brasil Day 2015. This show involved about 30 channels of wireless mics, some wireless and wired comms, and wireless delay towers. I spent a good portion of the day policing incredibly polite, Brazilian ENG crews to make sure we not only avoided performance mic dropout, but delay tower dropouts too.