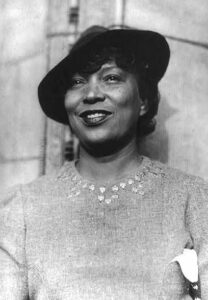 There are a variety of ways to approach the study of music.  I often tackle it from a technical point of view, but one can look at the historical and cultural context of music to decipher the larger picture.  Ethnomusicology is the study of the social and societal sources of music and is heavily tied with anthropology and the study of folklore. Through this human-centric approach, researchers learn about the ‘why’ of music and how emotions are expressed in different communities.  As a field of study, ethnomusicology developed in the mid-1800s, supported by the nationalist sentiments in classical music of the time. In the 1930s with the increasing portability of recording machines, there was a push to document folk music from around the world, especially in the United States.  In the Caribbean and the American South, Zora Neale Hurston was the champion of the African cultural diaspora.

While many ethnomusicologists start out as composers or musicians, Hurston was an anthropologist who studied folklore.  Where folklore and music overlapped, she did not hesitate to explore and document. Her best-known works are Their Eyes Were Watching God (later made into a film starring Halle Berry) and Dust Tracks on a Road (an autobiography).  Hurston’s relationship with human culture followed many avenues, as her name is most notably associated with the Harlem Renaissance literary movement.

Hurston was born in 1891 in Alabama and grew up in Eatonville, Florida where many of her books are set.  She dropped out of high school after her father and step-mother stopped paying for her tuition and eventually became a maid to a touring theatre company.  From there she found her way back to high-school and graduated at age 27. After receiving her associate degree from Howard University, Hurston pursued a B.A. in Anthropology from Barnard College of Columbia University.  She followed this with masters from the same institution and began research of African American culture in the American South from 1927 to 1932 under the patronage of Charlotte Osgood Mason.

It was from this research that Zora Neale Hurston took inspiration for her many novels. The lumber camps in Florida became Mules and Men, and spiritual and vodoun culture in Jamaica and Haiti became Tell My Horse.  Hurston’s dedication to anthropological research did get her into controversy.  Her adherence to dialect was not always appreciated in the literary world, as it was seen as degrading by her peers.  It took until 2018 for her nonfiction account of the last slave brought to the United States, Barracoon, to be published.  Literature was not the only way to share her research, therefore Hurston staged several revues of folk music and dance from the Caribbean and American South.  The Great Day was her first revue, staged at New York’s John Golden Theatre in 1932.  Later revues included From Sun to Sun and Singing Steel.  In 1935 Hurston collaborated with Alan Lomax and Mary Elizabeth Barnicle to record songs and interviews from former American slaves.  There are other instances where Hurston herself would perform the songs she gathered in her travels. These recordings are still available in the Library of Congress.

Zora Neale Hurston’s influence extends to this day with the ZORA! Festival of the Arts and Humanities in her hometown of Eatonville, Florida among other institutions created and barriers crossed along the way.  Hurston’s documentation and preservation of the voices of the American South and especially those of African American women help keep their stories alive. Our connection with our musical past is important for our musical future, and it takes many different disciplines collaborating to keep the connection alive.