University (Michigan Tech).  When the weather is at its snowiest is when the year’s biggest event takes place: Winter Carnival. Unofficially the carnival is a month-long event with broomball tournaments and highly ambitious snow statues, but the majority of the events occur within a week in February.  My favorite memories were of the All-Nighter, an outdoor party throughout campus that accompanied the building of the smaller snow statues. Our student Audio Engineering Society chapter would DJ the whole event with a set of snow speakers. Well, the Winter Carnival spirit continues with the current generation of students, and the SoundGirls of Michigan Tech wanted to share their experiences.

Michigan Technological University’s SoundGirls student chapter recently took part in the production of this year’s Stage Revue. Stage Revue is a theatre event that takes place during Winter Carnival, a mid-winter break that is a significant part of the Michigan Tech experience. There were four designers that helped design the sound and music of five teams that each put on an original ten-minute play. The sound team was comprised of four students.

Sarah Calvert is the president of the SoundGirls student chapter at Michigan Tech. She is studying Sound Design major and Music Composition minor who is set to graduate in the Fall 2019. She has a passion for design work, especially in theatrical entertainment and video games. What she loved most about working on Stage Revue was the opportunity to foster future opportunities and collaborations for future members of SoundGirls at Michigan Tech. She is looking forward to creating more of these opportunities throughout her final semesters and is enthusiastic about what these opportunities and events mean for passionate students.

Tyler Quinn is a 4th year sound design major and music composition minor. He enjoyed the apparent freedom that the groups were given to write their plays for stage revue. He also appreciated that they ranged from fearlessly madcap to gleefully offensive, making for an entertaining night of theater. His work for Stage Revue ended up being a pretty even mixture of background ambiences that I made with either some of my personal field recordings or various industrial machinery recordings layered on top of each other and some sci-fi effects made with synthesizers.

Marie Zgurich is a first-year Software Engineering student at Michigan Technological university. Her dream job is to create and promote software which can be used for audio production. While she claims she may not have as much experience as some of her peers, helping out with audio for Stage Revue and the chapter of SoundGirls was a fantastic learning experience. She learned that knowing your audience is important, as well as becoming familiar with the unique array of tools used by audio producers. Being able to incorporate the amusement and humor delivered by Stage Revue into the work made the environment much more fun and welcoming!

Moira Van Loon is a first-year Audio Production and Technology major. Stage Revue was the production she has done sound design work for. Her favorite part was watching the performances and getting to hear everyone’s work come together. What Moira likes best about sound design is that it blends both the creative and technical, which is important to her. 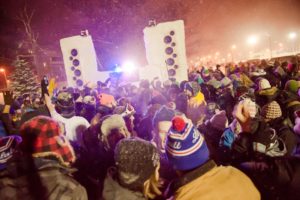 Afterward, I asked what Sarah Calvert what she thought of the event:

“Well, we did five, ten minute plays. Each one was different, but they all had to do with STEM courses in some way. Not all of the groups gave us the scripts that they wrote, so what the teams sent us as well as fun because they were fairly relaxed and grateful for whatever we designed for them. They liked everything we made. We learned that it is challenging working with students, as well as people who are not use to directing or giving specifics to designers. I know we all enjoyed the creative opportunity to design sounds for the shows. They were small shows, and I thought it was a great opportunity for younger designers to get their feet wet, which is something that I enjoyed and felt was an important opportunity for our younger members.”

More info on the snow speakers

Co-Written by: Sarah Calvert the president of the SoundGirls student chapter at Michigan Tech. She is studying Sound Design major and Music Composition minor