What I Know Now

As a non-male* songwriter, performer, and producer, I am always grappling with the concept of ability and credibility. In press on artists that I admire and follow, I see unconscious sexism. Figures like Grimes base their entire brand and music around “doing it all” themselves, while powerhouses like Kendrick Lamar call their producer-artist relationships “collaborations” in spite of the fact that Lamar is decidedly unfamiliar with music technology, i.e., while he never touches a computer making a record. 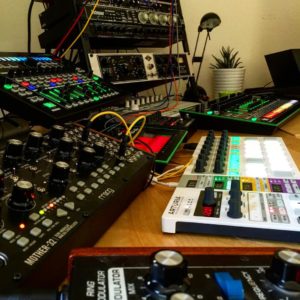 Battle Tapes Studio – some gear at my friends home studio

Where is the line? When can a non-male take ownership of what they have created? When can a non-male artist become a figure like Kendrick Lamar without being criticized for not doing everything, from writing to engineering to playing to producing to performing? It makes me angry. It makes me feel like I have a lot of teaching and showing to do. In an effort to do that, I have given some thought to what I know that I didn’t know before I was producing. Here are some of the most important things I have learned thus far that I would like to pass on to anyone who is just starting or needs a pick me up.
Your ears have to practice too

When I first started recording and producing myself, I thought that what I was making was sounding pretty good. I was always reading up on engineering and different production techniques. I even went against the wishes of my pride and would show other producers my sessions so they could give me feedback. Since I was aware of how to make something sound pretty good, I thought that I was already doing it. But there is no substitute for time and practice. Your ears will get better at their job the more that you use them. Engage with the sounds and arrangements you are working with. Ask other producers how they are hearing something. Get a perspective. Make decisions. Play. Wear ear plugs for loud shows! You will find that your ears get better with practice.

This point is related to the first one in some ways. I think that when I first started, I was so enamored with my voice just being recorded and effected that I didn’t think about all the ways to produce it even further. Eventually, I will do a whole post about vocal production, but beyond your chain (mic, preamp, compressor, etc.) being as good as your budget can afford, there is the physicality of vocal production as well. You have to ask yourself, what kind of record are we making? What kind of performance are we aiming to capture here from this vocalist? What are they capable of? Now how can I get that to come out of them and into the mic? Are they excited or turned off by the idea of being in a vocal booth?

Once the performance is done, then you get to work comping—the best bits of each take in a composite—though there are exceptions. Beyond the main vocal comp, you can also make use of doubles, harmonies, ad libs to create the perfect vocal for your record. The possibilities are endless. But it’s your job to make the decisions about how to get the best vocal audio into your DAW so you can continue to make it into an incredible record. 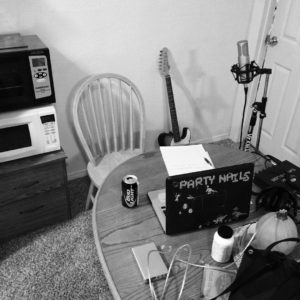 Silverlake kitchen studio – one of my many makeshift home studios

The more you make stuff, the more stuff you will make.

This one is pretty self-explanatory. If you haven’t experienced this firsthand, it may seem like an oxymoron. But it’s not. Trust me.

Working in groups can make you better, but isn’t the end all be all.

If you have the opportunity to write with other writers/producers, especially if they are more experienced than you, take it. If you don’t have that opportunity, seek it out. You will learn something, even if it doesn’t feel like it at the moment. Sometimes co-writing sessions can be tedious. Sometimes they feel like all you are learning is what you don’t like. But that’s very good to know! On the flip side, sometimes you make great new friends that blossom into much bigger relationships.

Co-writes are big in the music business right now. It’s an easy way for publishers, labels, and managers to make their clients feel like they are doing something for them, with minimal commitment and cost. At a certain point, it can start to feel like if you don’t do it a lot, then you’re doing something wrong. But that’s just the status quo that the big businesses created to have more control over their creative people. At the end of the day, YOU are the creator of the music, and it’s up to YOU to figure out how YOU make the best music YOU can make. If that means lots of co-writes and co-productions, then that’s awesome! If that means producing your friend’s bands out of your bedroom studio, alone, then that’s awesome! If that means making beats all day long in your friend’s studio that they let you use, then awesome! Your talent is your business, and you need to constantly be thinking about the things that affect your talent and business.

You are strongly affected by the company you keep.

This statement is made so often I think we have stopped listening. But try listening to yourself say this out loud: You are strongly affected by the company you keep. If you are not genuinely challenged—creatively and professionally and personally—by the people around you, then go somewhere else.

I was surrounded by lifelong friends and some great musicians when I lived in New York City a few years ago. But when I wanted to take my music to the next level, I felt like there was nowhere for me to go. My immediate circle was too comfortable for me to feel like I could take chances, and as a result, I wasn’t meeting new people or trying new things. Eventually, I met ONE professional songwriter, and I decided to move to Los Angeles when they moved out there. I left all of my closest friends and collaborators on the east coast and hoped for the best out west. I almost immediately found myself surrounded by people who were similar to me, but 10, 20, 30 years into their careers. I had found the challenge I had been missing. This new perspective motivated me to try new things and start putting together my skillset in ways I’d never imagined. I also started to take better care of my mind and body, another essential habit to have.

Everything happens for a reason.

No matter where you are on your path, there are always going to be ups and downs. Always. And sometimes your path can feel especially winding and long. But if you keep your heart and your mind open, you will see that everything happens for a reason. Every dumb day job, every bad partnership, every mistake, every ditch you dig for yourself, every delay—there is something to be learned and built upon from each of these, and that is a beautiful thing. You will never stop having ups and downs. Ever. Get used to it. Learn from it. Build on it. See the beauty in it.

Don’t stop doing what got you started in the first place.

Unless you are extremely lucky, are going to be points in your career where you are limited on time and resources. During these times you might find yourself compromising and eliminating things that you maybe shouldn’t. For me, those things were producing and guitar playing.

When I first moved to Los Angeles to pursue music professionally, at some point along the way I stopped producing and playing guitar. Mostly it was because the settings I was in just didn’t call for it. I’d go into a session with a producer and another writer, and I would be the person to write and sing the demo. I had a day job as well, so with everything going on I wasn’t playing or producing much when I got home at night. I felt like maybe I was never really going to be that good anyway, and this negativity toward things I had previously loved made me feel very disconnected from myself. At the same time, I was gaining writing and singing chops. By putting down my guitar and taking a break from the computer, I was definitely opening my mind up to new techniques and genres that I had not previously delved into.

But boy did it feel good to pick them back up again! 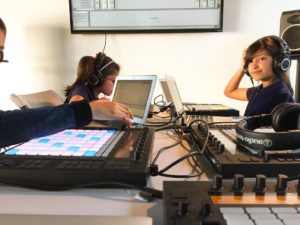 I encourage you to find a way to keep in touch with yourself and the things that inspire you, no matter what seems to get in the way.

In conclusion: as my good friend Rob Caldwell always says to his guitar students when they ask him how much they should practice: you get good at what you do.

*I use the term “non-male” to include anyone that does not identify as male.  Gender is a social construct, and supported by science and backed up in legal rulings. I believe sexism frequently oppresses people who identify as non-male, especially in tech-oriented industries.

Gender Laws Are at Odds With Science

What’s the Difference Between Sex and Gender?

Too Queer for Your Binary: Everything You Need to Know and More About Non-Binary Identities