What can you learn today?

You can teach an old dog new tricks

I had a wonderful opportunity recently to work side by side with another engineer who has been in the music business since before I was born…and I’m no spring chicken so that’s quite a notable amount of time.  We spent three days together, during which I learned much.  This occurred as he was handing off his long time FOH gig to me.  We both wanted the transition to go as smoothly and seamlessly as possible, so the two of us spent his last three shows working together.

It’s rare that I have the chance to work so closely with an engineer of this caliber and although I’ve been mixing for nearly three decades, he’s got substantially more experience, having been in the business since the 60s. 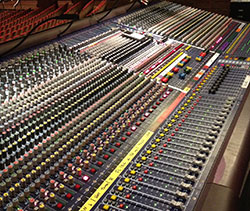 He started his career as the lead singer of a rock group with a million-selling hit record, went on to produce and engineer hundreds of records for various artists over the past 40 years, and has been mixing FOH for this band for 20 years.

While we both have different techniques and approaches to mixing, we are both after the same result- a great sounding mix true to the sound of the band.  I learned from watching and listening to his mix, and from him watching and listening to me.  It was such a wonderful experience, and in just three short days, I’ve come away a better engineer for it.  This is one of those experiences that are few and far between.

There are opportunities for learning all around

Even if you aren’t this moment, doing your dream job, what can you learn from your current situation?  Along with technical knowledge; people skills, efficiency, troubleshooting, diplomacy, and tact, how to delegate, how to deal with difficult people, how to remain calm under pressure, are all things that serve us well no matter what job we are doing. Who do you know or work with that excels at these things?  Watch them and learn.  Pick their brain about how they handle specific situations or problems.  Ask them if they would be willing to share their techniques.  Listen and learn. It’s far too often that I see young aspiring engineers rambling on endlessly about what they know and how much they think they know, all the while missing the opportunity to glean knowledge and wisdom from those more experienced.  A good lesson to learn is knowing when to keep your mouth shut and absorb what you are being taught rather than offering up your two cents every chance you get.

It is also important who you learn from

People skills are incredibly important in any job. Some people are exemplary teachers, they have positive, can-do attitudes, are capable of diffusing difficult situations with a calm and rational approach, total team players, and are 100% pro.  While others can be inflexible, short-tempered, quick to scream and shout, and always there with a ‘No can do’ attitude.  Needless to say the former are habits and traits you want to learn, while the latter are much better as lessons of how not to behave.

There are no stupid questions

If you have the opportunity to work with a Mentor, make the most of it.  Ask questions, seek advice, they have a wealth of experience and knowledge that is yours for the taking.

Don’t ever be afraid to tell someone you admire their work and would love to ask them a few questions.  Whether it’s something technical or just how to take your career to the next level.  Being open and honest about wanting to learn is a great way to get the conversation started.

People miss opportunities for learning every day.  From being too shy to approach someone doing the job they would like to be doing or being too insecure, to be honest about what they don’t know.  The issue can arise when you are fairly inexperienced or insecure in your abilities.  You may be afraid to let others know what you don’t know.  Sometimes this results in the proverbial ‘chip on the shoulder’ because we feel we have to measure up.  It can be especially tricky for young women to work through, as you may feel you are already being judged for being a woman and have to prove yourself.  Admitting you don’t know everything can be daunting.  However, it is extremely difficult to learn from others when you are carrying around a chip on your shoulder. Instead of trying to conceal what you don’t know, own it. Nobody knows everything and usually, the only people who will fault you for confidently exclaiming that you don’t know something but would like to learn, are those who are insecure in their own abilities.

So the next time you are working with someone more skilled and experienced than yourself, see what you can learn from them, I’ll bet you’ll find something.

Read Michelle Sabolchick Pettinato's Blog
Browse All SoundGirls Contributors
We use cookies on our website to give you the most relevant experience by remembering your preferences and repeat visits. By clicking “Accept All”, you consent to the use of ALL the cookies. However, you may visit "Cookie Settings" to provide a controlled consent.
Cookie SettingsAccept All
Manage consent