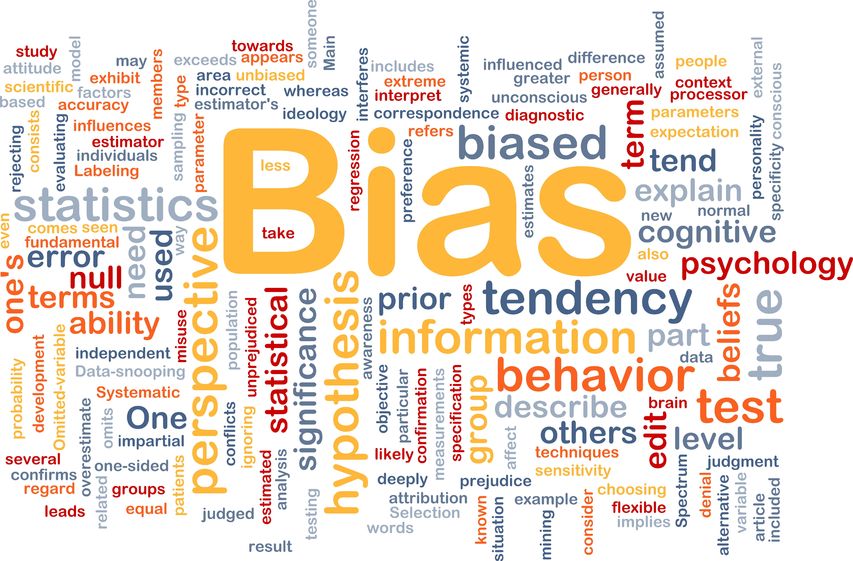 My blog was originally going to be about competition. The positive and negative of competition in the workplace, how men and women may view competition differently,  and how to deal with it. A few things happened last week that have caused me to do a lot reflecting on biases, mine, and how biases affect outcomes in our work and lives. I thought I would share those experiences and my thoughts with you. Next month competition.

The first thing that happened last week was the following post to the SoundGirls.Org Facebook page. It was from a dear friend of mine that I spent many years touring with.

Mark Edwin Johnson I can remember in the 80’s, touring many times with Karrie Keyes, and there would be some guy on the local crew who’d feel the need to make some comment to one of us “fellow crew guys” about having a chick on our crew. If the comment was about her abilities, we were quick to comment on how SHE was the one touring with amazing bands as one of the sound ENGINEERS and he was a local schmuck humping gear, FOR HER, and how she made more in a day than he did all week. If his comment was about having to put up with a chick, we’d point out that if he opened his mouth again, he’d be dealing with EVERY member of our crew, plus how we (the guys on our crew) loved having her with us and furthermore with comments like that it was easy to see why he was and would never be more than a schmuck humping gear for real touring personnel.

My Response – Love You – I never even knew – The Red Hot Chili Peppers and Pearl Jam Crew are the best and Sonic Youth Crew.

Mark Edwin Johnson Of course you never knew, because it wasn’t even worthy of being repeated.

Of course, it made me feel all warm and fuzzy and for 20 + years I was not aware that this had ever happened or that my crew stood up for me behind the scenes. The remarkable thing was they never mentioned it to me, and that is truly the greatest gift they could have ever given me. This gift allowed me to approach each work day as part of a road crew and do the best job I could that day. If they had told me each time this happened, I would have approached each day expecting or anticipating that I would have to deal with sexist crap from the local crews. It would have eventually changed how I viewed touring and working in sound. It would have eventually biased me, I would have started to put up walls to protect myself.  I would have changed how I dealt with local crews and men in the industry. Instead, I had a strong touring support network and had pretty great experiences touring. I have worked with some pretty amazing crews from RHCP to Pearl Jam to Sonic Youth to Fugazi.  I have been blessed.

So Thank You Mark Johnson and RHCP Crew –

The second thing that happened was that I was forced to confront some unconscious bias that I have held for many years. I consider myself a feminist; as in Feminism is a social movement advocating for equal recognition of human rights and associated protections for all genders and all marginalized people. Not just rights and protections on paper or in theory, but rights and protections in practice. I consider myself anti-racists, anti-sexist, anti-corporatist, and anti most things which do not promote equality and freedom. I am also an undergrad in sociology and understand how institutionalized racism and sexism are barriers that are extremely hard to break through and bar people from even starting out on a level playing field. I understand how general stereotypes and generalizations hurt people. I am an activist, and I am deeply committed to solving social issues.  So it is pretty difficult to confront my unconscious bias, especially when it has to do with gender and stereotypes.

Unconscious bias is just that, Unconscious. We all have unconscious bias, and it influences how we view and sum up others, as well as ourselves. We tend to find ourselves in the company of other people who think like us and come from similar backgrounds. Think about your co-workers (politics, class status, religion aside) – techs and roadies, tend to be similar in dress, work ethic, and have similar backgrounds in work experience. We have a common language – and often we can spot one another in an airport. When traveling together we are roadies and everyone else is the others. 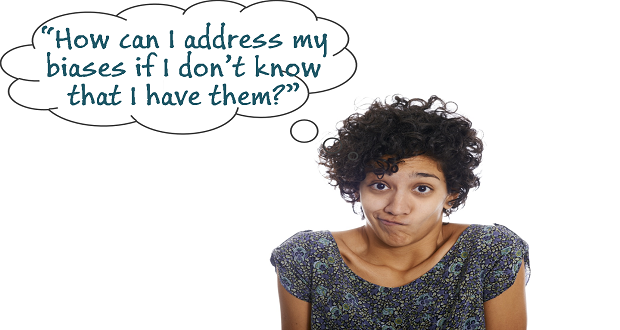 We all like to think we are open-minded and objective, but there is plenty of research that shows our beliefs and values are shaped by family, culture, and our lifetime of experiences. The life-experiences we have help us to develop patterns, assumptions and interpretations. Simply biases. Bias helps us to process information, and from a survival perspective it is necessary, but it also can be costly. In the workplace, bias can cause us to make decisions that are not objective, resulting in missed opportunities and not being able to provide a professional service. In fields such as criminal justice, bias, and unconscious bias can have devastating consequences, ranging from lack of access to legal counsel, harsh sentencing, to being murdered by police.

~They are emotional ~ They like to be the Queen Bee ~

~They are more difficult to work with ~

I first started to realize how damaging this was a few years ago; I was working a benefit concert for the West Memphis Three, and I was mixing monitors for all of the acts. I sound checked EV and Ben Harper, and it all was good and I was enjoying myself. Then it was time to check Natalie Maines and my attitude changed, instead of being open and approachable, I was guarded and prepared for anything. Well, the sound check was difficult, and then we checked my hero Patti Smith and she was a bit short with me. I remember thinking and allowing it to reinforce my beliefs that women are just difficult to work with.

Last week I did an interview, where I was asked what the worst shows I had ever worked and why. I made a list and realized they all had one thing in common, extremely difficult and challenging vocalists. Were they women? No, they were all men, and they would all fit into the stereotypes of women I listed above.

They were all very emotional; they could be called Queen Bees, or Divas, or as I call them Dictators, and they were some of the most difficult people I have ever had to work with.

Since, the top of my list of difficult performers were all men, where did my belief that women were more difficult to work with come from? (My top ten list only included one woman and she came in at number five). I then made a list of all the challenging women artists; I had worked with.There were only four. I then compared them side by side to the male performers on my list.  Only one woman, even came close to the men. None of the women ever threw anything at me or treated me as I was the most terrible person in the world that was out to sabotage the show. They never melted down onstage or fired me during a show.

So where did I get this bias towards women? It was based on one experience that was pretty terrible. One that I allowed myself to get sucked into her drama.  I did not conduct myself in a professional manner, and I still regret that. I have worked very hard never to let that happen ever again. But, I never let myself get sucked in with men, I always knew they were behaving badly, and I knew I had very little recourse, but I did stand up for myself. This bias I developed was unconscious and for years and was reinforced by societal stereotypes.

It is a good exercise to think about your biases and how and why they have been formed. How these biases might affect outcomes in your workday. Biases are shaped in ways we may not be aware of and cause us to react in a certain manner. It stops us from understanding the needs of others or why they may be reacting in a certain way. Of course we can learn from our experiences and be able to anticipate the needs of certain artists of genres of music, that is what makes us professional. It is when we make assumptions based on biases that it becomes unprofessional and does not produce a positive outcome.

Bias even affects the words we use to describe someone or a situation.  Notice the difference between challenging and difficult.

Challenging is difficult in a way that is usually interesting or rewarding.

Difficult is hard to deal with, manage, or understand.

Do you see the difference?

Do you view certain types of music or organizations as disorganized, unprofessional, or say things like they always show up late and unprepared, they are unprofessional, they are difficult or any other type of generalization? Do you turn down work because generalizations and biases you have made and not based on facts? It is fine to turn down work because you find the artist to be difficult to work with and do not wish to be involved with them. It is not okay to take that experience with the one artist and apply it to all artists in that genre or gender, race, class, or religion.

It is fine to be prepared for a certain type of show from past experience. Insert Genre usually rolls into soundcheck right before doors, and I have found are not always ready. I am going to anticipate their needs based on experience and be prepared to the best of my ability. It is not okay to say insert genre – always roll in late, have friends working for them, and their gear never works. and then project that into your workday.

Even, when we think we treat everyone we encounter with respect and in a professional manner, our unconscious bias undermines this.

Our experiences can affect how others approach certain situations. By introducing our negative experiences into their conscious. This year will mark the 15th anniversary of Roskilde, for me this is difficult day, as nine people lost their lives during Pearl Jam’s performance. I have never talked about this with others that spend many days every year working festivals. I do not want to bias or change the way they view working festivals. The way they approach working festivals is much different than how I approach working them. We all have to work them and there is enough to deal without introducing this fear into it.

Very early in my career I worked several shows with an Iranian Dissent. He was a superstar in Iran. He had been imprisoned and tortured, and his facial scars detailed his history. He was always difficult to work with, I felt he was rude and a male chauvinist. I already had biases towards Iran formed through the narrow lens of the United States, and most likely by the movie Not Without My Daughter. I had no understanding of his culture, history; I could not fathom what he had been through. It took me several years and sociology classes to understand this. He could not understand my culture, history, and could not fathom why I was running his sound. I could not understand how confusing and possibly scary it must have been for him, and he could not understand how tired I was of sexism. If we were to work together today, I think we would find that we are much more similar than our biases would allow us to believe.

Test yourself for hidden bias