One of the blessings of having the boss I have at the Bistro is that he is understanding (or at least tolerant) of my tendency to NOT do things because “they’ve always been done that way.”  I am a perpetual wonderer – the proportion of my daily thoughts that begin with “What if…”, if calculated, would probably result in some heart-to-heart talks with well-meaning friends and relatives regarding my attention to matters at hand, or the location of my car keys, or similar such nonsense. The point is, I like to explore possibilities, and my work at the Bistro has presented many opportunities – and some imperatives – to put that impulse to work.

One of the things I’ve been having a lot of fun with is digging in to our mic selection. I read the manuals and think about how the described characteristics might solve problems I have , or support something onstage, without consideration for how the mic is normally used. This has resulted in some fun discoveries. We don’t have a ton of mics, but we have an assortment of RE20s, 421s, 414s, the obligatory 57s and 58s (SM and Beta), a set of Schoepps, a couple of Neumann KMS 105s, some plate mics and pencil mics, and a microphone I’d never seen before – an EV N/D 408. That’s this guy: 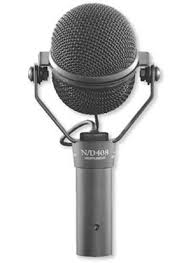 We have had that mic in inventory for a long time, but no one had ever used it. Come to find out, it’s an excellent-sounding mic for upright bass, and is now my go-to for that instrument. Which is awesome, because it frees up an RE20, which in addition to putting on saxes, I have taken to using as drum overheads. Yes, drum overheads. They look goofy, but they sound really good. And when you think about it, why shouldn’t they? They are cardioids featuring very little off-axis coloration, a full frequency response, can handle high SPLs, and have an internal shock mount. I’m still experimenting with the best placement for these on the kit, but they sound natural and clear everywhere. Last week, I put a Beta 58 ( a mic I normally despise on our stage) on a twin guitar amp that tends to sound mushy in the mix and got another good result. Again, it looked weird – I placed the mic in the same position relative to the speaker that it would be being held by a person talking into it. From the booth, it looked almost parallel to the front of the amp. But looks aside, I got exactly what I was hoping to get out of it, a crisper, more defined guitar in my mix. And I got to see exactly how strong the force of habit is with us sound types in the process. The first student to play the guitar in the showcase that evening so objected to my mic choice that he took the grill off of the Beta and repositioned the mic (we corrected this). I wasn’t mad at him, but it was an interesting display of how we dismiss new ideas before we try them, just because we don’t want to appear to be doing anything outside of the established norm. And the benefits of this experimentation extend beyond “this mic on this instrument” observation. It’s also helping me get to know the mics in terms of how much unwanted sound they reject and from what directions, as well as how that sound is picked up and colored. That gives me a more complete picture of what my stage will sound like when I’m preparing my setups, which is extremely valuable to me. I’m all about taming variables.

So, by eschewing the “well, nobody does that” school of thought, I’ve given myself a little more depth on my mic roster. My next project is for monitor world. One of the major gripes I get from artists who play at the Bistro is that the stage is dead. It’s unnerving for them. And one of the features of this is that I quite literally can’t give some of them enough of the bass in their wedges to make them happy. Part of this, I’m sure, has to do with the rung-out EQ of the monitors, and part of it just may be the cabinets themselves. What I’d like to try is deploying some “bass ONLY” wedges on the stage. I’ll try to ring out a monitor or two specifically for the purpose of reproducing bass without feedback, then place a couple of those onstage and take some of the bass mostly OUT of the individual wedges. My hope is that I’ll get a two-fold benefit – more and punchier bass out of the bass wedges, and more bang for my buck with the individual wedges by not having to worry about pumping tons of poorly-eq’d bass through them.