Strategies for a Successful Career in Touring

Join us for a lively discussion between a gathering of A-List touring pros as they share their stories and strategies for success and longevity in the business of concert touring.

… and guess what? They’re all women!

The Reality of the Job – Paying your Dues – Mastering Your Craft -What Technical Skills are a Must – How Production Crews are Staffed -What Production Managers are looking for – How to get your first tour and your next one – Being a Versatile Tech – Your Skill Set- Defining your job expertise – From A-List to Back in the Van.

Michelle began working in live sound in the late 1980s,  a time when there were very few women in the field.  Her professional touring career started a few years later when she was hired to mix FOH for the band Spin Doctors. Since then, Michelle has traveled the world mixing FOH for some of the most recognizable names in music including Indigo Girls, Jewel, Gwen Stefani, Janet Jackson, Melissa Etheridge, Goo Goo Dolls, Styx and many more.  In 2015 Michelle was inducted in Full Sail University’s Hall of Fame and in 2019 Michelle created and launched Mixing Music Live an online video course for live sound and mixing.  She is an active mentor and coach to those seeking a career in Live Sound and Music Production and has been a frequent speaker on industry and university panels and conferences.  Michelle is Co-Founder of soundgirls.org and she continues to be a full time touring sound engineer, most recently on tour mixing Elvis Costello up until the current pandemic.

Karrie has spent the last 30 years as the monitor engineer for Pearl Jam and Eddie Vedder. Karrie started out doing sound for punk bands in Los Angeles in 1986 under the tutelage of Dave Rat of Rat Sound, where she spent twenty years helping to establish the company. She was able to gain an immense amount of hands-on experience and technical knowledge at Rat, which eventually led to her becoming the monitor engineer for The Red Hot Chili Peppers from 1990-2000. She first met and started working with Pearl Jam who opened for RHCP on their 1991-1992 Blood Sugar Sex Magic Tour. She has worked with Sonic Youth, Fugazi, and Neil Young. Karrie is a Co-Founder of SoundGirls

Becky Pell is a monitor engineer with 25 years’ experience in the live music industry. Originally from the UK, Becky now lives in Australia. Her mixing credits include Westlife, A-ha, Anastacia, Take That, Il Divo, The War of the Worlds, Muse, Kylie Minogue, Bill Wyman, James Brown, Jennifer Lopez, Sarah Brightman, and Natalie Imbruglia. She is regularly in charge of monitors at the world’s largest festival, Glastonbury, and writes a monthly column for Live Sound International. Becky is also a qualified coach and Yoga Therapist, and between tours, she runs yoga retreats in beautiful locations around the world and coaches clients on Zoom.

Christina Moon has been working in audio for over twenty years. Primarily known as a touring monitor engineer, but has had her hands in a little bit of everything in order to get her foot in the door. Christina works with Sleater Kinney, Beach House, LCD Soundsystem, Yeah Yeah Yeah’s, Death Cab For Cutie and Interpol.

Claudia Englehart has been a professional live-sound engineer for 38 years. In 1982 she began her career working in the historic San Francisco jazz club Keystone Korner. In 1983 she moved to New York City and continued mixing live sound in clubs such as CBGB’s, The Bitter End, and S.O.B.’s, and then in 1985 began touring full time as a front of house engineer. Since 1989 Claudia has been working full time as sound engineer and tour manager for guitarist Bill Frisell. She has recorded two live albums for Frisell, “East/West” and “Bill Frisell Live”. She has also mixed and recorded just about all of his live concerts over the past 30 years, which has resulted in a Live Download Series, concert recordings available for download on Frisell’s website. When not on tour with Frisell Claudia has toured extensively with many other renowned artists, including Wayne Shorter, Herbie Hancock, Laurie Anderson, Lou Reed, Ron Carter, Michael Brecker, Grover Washington Jr., Dave Holland, John Scofield, Charles Lloyd, Lee Konitz, Marianne Faithfull, Rosanne Cash, Ryuichi Sakamoto, David Sylvian, Medeski Martin & Wood, John Zorn, The Kronos Quartet, Don Cherry, Cecil Taylor, Eddie Palmieri, Willie Colon, and many others.

Marguerite Nguyen started her career interning with a local rock station and promoter. Working as a promoter, she realized there were not many women tour managers and decided that that was the path she would follow. She got her first gig on the road with the Indigo Girls working under Matt Miley. From there she moved to Los Angeles and has gone on to work with Coldplay, Janet Jackson, My Chemical Romance and more.

Melissa Britton started mixing live sound in a classic rock biker bar in Golden, CO. Shortly after, she started working for a sound company that opened the door to venues all over Colorado like Red Rocks amphitheater, Fiddler’s Green, Mile High Stadium and most smaller theatre’s in Denver. After several years with the company,  she was picked up by Dave Koz who she still works with today. Koz also exposed Melissa to other Jazz, Blues, Pop, and Funk artists (Al Jarreau, David Sanborn, Tower of Power, Keb Mo, Sheila E., James Ingram, and Boney James) that expanded her career.

Working in a smaller market is intimate, personable, and constantly shifting gears.  You wear a lotta different hats to get the job done. A positive attitude and a strong work ethic go a long way. It’s kept Melissa busy the past 25 years and taken her all over the world.

Tana Douglas is acknowledged as rock’n’roll’s first female roadie. Her journey started at the age of fifteen, in 1973 in Australia within a year she was working for AC/DC, first doing backline then F.O.H. Sound for the band. She then moved to lighting working for a Major Australian Promoter and completed in quick succession several tours with International acts such as Santana, Suzi Quatro, Neil Diamond, David Essex, and Leo Sayer and Status Quo all before she turned 18. Tana has worked in Audio, Lighting, Tour and Production Managing and Logistics.

Tana resides in Los Angeles, California, where she is currently participating in speaking engagements, mentorship programs to the next generation of Music Industry technicians and is writing her second book. 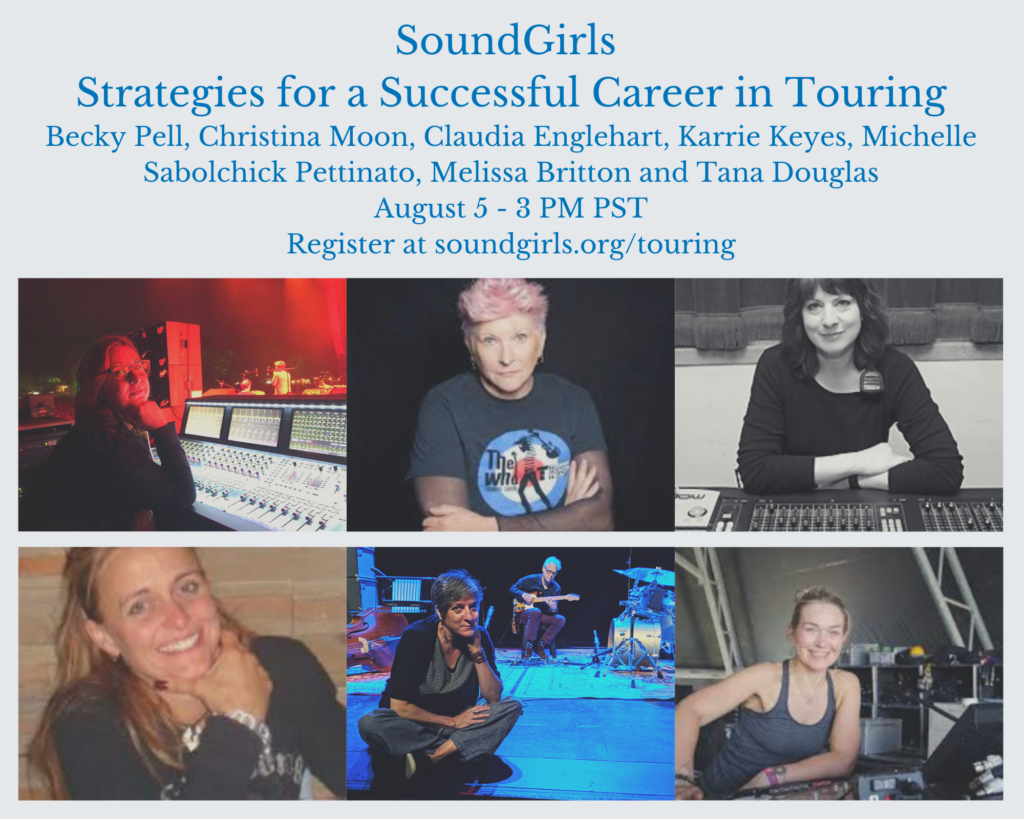