Touring – A Tribute to our Strengths in Times of Darkness

The horrific recent event in Manchester shocked the world, and hit the industry many of us call home, the touring music business.This murderer targeted not only human lives, but joy, happiness, and community. People – kids – who loved music, having fun at a gig. Coming together to celebrate life and enjoy that transcendent sense of uniting in the excitement of a great show.

The attack happened a few days before my current tour was scheduled for its Manchester gig. Our show went ahead and was one of the first to happen after the attack. While there were a significant number of people who had bought tickets but understandably decided not to come out that night, there were also a great many who felt brave enough to defy the hate-filled cowards who try to scare a free society into submission.

I won’t begin to try to make sense of what happened at Ariana’s show – we call it senseless violence for a reason, and there can be no justification for such appalling actions. Instead, I’d like to pay tribute to all of those who have been affected by this real-life horror story and remember everything that is so wonderful about the music industry and our touring family.

The whole reason that a music industry exists is because of how music makes us feel. Whether we’re feeling elated, melancholy, misunderstood or angry, music is there to help us ride that wave of emotion, process it, or shift out of it. It touches the deepest, truest part of us. It makes us stronger. It unites us. Nothing else has a power quite like it – music is unbreakable. While the industry which has grown up around it certainly has its dark side, the fact remains that it only exists in the first place because of joy. For all its downsides, it’s a fabulous way to make a living – it’s pretty great to look at a jubilant crowd during a gig and know that, in some infinitesimal way, you have contributed to the sum total of human happiness. Those fans deserve our gratitude and respect because they are the music-lovers who make our touring industry possible.

I’ve written before about the strengths of roadie-dom and the way we pull together to make shows happen in the most unlikely and challenging of circumstances. I can think of no better folk to be amongst when you need to pull off the seemingly impossible, and whilst we may not go in for deep and meaningful heart-to-hearts (at least not until the wine is flowing), we become very attuned to each other and quickly sense when someone isn’t ‘right’. I’ve lost count of the ‘is he/she ok? Will you have a chat or shall I?’ conversations I’ve had over the years. Even when it’s just a case of the tour blues and you’re missing home, it’s good to know that you’re surrounded by friends who have been there too and who get it. Friends who will let you get it off your chest and then jolly you along.

We have each other’s backs in a way that more formal industries can only dream of. Because we literally live together for months at a time, strong bonds are quickly formed, and this motley bunch become your touring brothers and sisters, your family away from home.

So what are those shared qualities which make our industry so special?

1 – We are resourceful. Rock concert up a mountain in a blizzard? We’re your gang.

2 – We are determined. Blizzard or not, that concert has to happen. The fans have paid, and there WILL be a show.

3 – We are practical. We roll up our sleeves and get stuck in.

4 – We are logical. Things happen in a certain order for a very good reason.

5 – We are adaptable. If that order can’t happen (lighting truck falling down a ditch is one that springs to mind), we find ways around it. Because see 2.

6 – We are responsible. Yes, we might like to party on our down time. But don’t let that fool you – when we’re dealing with large amounts of electricity, hanging tons of gear in a roof, and lifting heavy, cumbersome flight cases, we’d better have our heads on straight, or someone’s going to get hurt.

7 – We are efficient. Non-touring folk are amazed at the speed in which we can set up and pull down a spectacular show. Especially after the 100th time we do it!

8 – We are hard-working. There are no sick days in our world – I’ve mixed shows with a bucket next to me when I’ve had a vomiting bug, and most of us can relate similar tales. But if you are seriously ill, get to a hospital.

9 – We are there for each other. If one of us is truly too ill to do the show, we pull together our collective skills and make it happen. It might not be perfect, but the audience will be none the wiser.

10 – We are friends. We laugh and joke and share truths, we fall out and makeup and put it behind us. We take the piss out of each other mercilessly but stick up for each other when it matters. We don’t see each other for months and years and then pick up right where we left off. 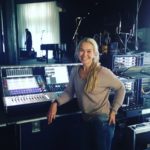 Becky Pell: Becky is a monitor engineer with over 20 years experience in the live sound industry. Since 2012, Becky has been a registered yoga teacher and leads retreats and workshops when she’s not on the road, as well as teaching the artists and musicians she tours with mixing monitors.