The Sound of Cinematic Femininity 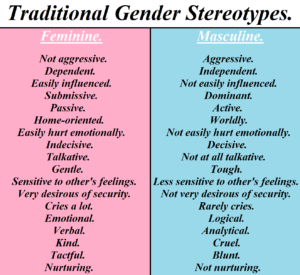 Masculinity is well established in the sonic world:  baritone voices boom, while the steady pacing of drums interplay with fists or bullets landing their mark.  Femininity, in contrast, seems to be developed only as far as to say “not manly,” or in characteristics that attract the leading man.  Just as scripts provide women with roles that exist solely in relation to the men of the film, sounds that are feminine often act as an antithesis to the masculine and nothing more.  I want to explore what films get right and wrong aurally about femininity, and create an argument for diversity in how a character design is approached (and by extension diversity in the field of sound design).  Full disclaimer, this is not an exhaustive list, but a journey to see past shallow stereotypes.

Let’s start with the baseline of what is masculine.  In skimming the top “manly” or “masculine” titles from popular men’s magazines and film review sites, I see recurring themes of sports, war, and fighting action.  The lead is usually a man with muscles, a confident catch-phrase, and he is usually armed. Building up the sonic world we have guns with their loud and jarring accessories of bullets, ricochets, and death screams (The Godfather, 1972).  Any sport, including martial arts, require grunts and intensive body movements that might include collisions and punches (Bloodsport, 1988).  With the intensity of the action, these films are often loud; there might be explosions, helicopters, police sirens, and even robots (Transformers, 2007).  The leading man’s voice is steady, and according to The Pudding’s 2016 article on film dialog by Hanah Anderson and Matt Daniels, the leading man (and his male co-stars) dominate the conversations.  Musical themes, when orchestral, are full and will give a nod to Gustav Holst’s Mars when war is included (Gladiator, 2000).  80’s action films, which relish the masculine tag, often benefited from hair metal title tracks (Rocky, 1976).

I do not have to search long to find examples of masculinity, and even with gross generalizations, there are many genres and lists that support these stereotyped characteristics.  There is variation, but the archetype is well established. The initial films cited are from the United States, but I could also use Machete (2010, Mexico) and Oldboy (2003, South Korea) as examples.  I feel I almost do not have to mention the low percentage of women in the crew of these films, Django Unchained (2012) for example has one woman on the sound team, Renee Tondelli as ADR mixer.  That is not to say that women are incapable of being sound crew members, Paula Fairfield (Emmy Award winner) shows, along with the other names I drop in this article, the skill does exist from an underrepresented pool of talents.

With masculinity established, I want to look at femininity with male context.  What I mean by this is femininity created by and for men: male directors, male crew, and possibly male protagonists.  This is not always coming from an uninformed mindset, and can be perfectly nuanced for the LGBTQ community. First, however I will look at what does come off as cliché and expected.

As soon as sound was introduced into film there was an expectation of what starlets should sound like. A notable example is Snow White and the Seven Dwarfs (1937) with Snow White’s delicate soprano voice singing opera with the birds.  The voice actress was even kept hidden from the public eye to keep the perfect illusion of the character.  Her frail voice, like its main character, was an object for the masculine to acquire, and was not any more developed than pure and frail.  The transition to talkies with the focus on voice timbre was parodied too with Singin’ in the Rain (1952) when the blonde bombshell’s voice was too shrill, nasally, and contained the edge of city life.  Debbie Reynolds’ warm alto was more “leading lady” material, although her own voice was overdubbed by soprano Marni Nixon for “You Are My Lucky Star.”  Nixon is the invisible songbird of many classic performances, and her voice is a great example of the feminine stereotype, clean and sweet. Synonyms like dainty, modest, careful, nice, and pure could also describe her voice.  Often leading ladies are cast as “vulnerable,” “fragile,” “frail,” and “passionate.”

Soundtracks latch onto these words for love themes, embodied by the string section of the orchestra, for example Dr. Zhivago (1965), and Once Upon A Time In The West (1968).  Xochimilco (1944) is another film that focuses on the fragility of women and uses the set of the lead’s solitary home on calm waters with rain and nature to contrast the bustling town that antagonize her.  The silence does not overcome noise, and like the main character, it exists in a brief moment only as a spectacle. In the world of male directors, composers, and sound designers, femininity is an object to be won in love or tossed aside in favor of strength.  Where it finds its footing is when it is embraced by LGBTQ stories like Moonlight (2016).  In this battle of masculinity and femininity the most intimate moments are quiet, soothing, and peaceful.  Ocean waves complement a refreshing breeze, a tiny bell chimes, and a meal lovingly prepared sizzles. This is tenderness and vulnerability intertwined with hope.  Femininity becomes a character that is part of the journey, and exists as both positive and negative. The strength is subtle, breaking silence with a tiptoe and not a roar.  Hedwig And The Angry Inch (2001) roars, but it too has vulnerability and anguish woven into the soundtrack.  As Hedwig is trying to figure herself out, her songs explore many emotions while fading in and out of diegetic context.  For Hedwig femininity is a spectrum, and not an end goal and so it cannot be as static as films of old would have it.

Femininity can be portrayed properly and improperly in the hands of men, but what about from us?  While there is still a ways to go in representation, there is a surge of female-driven films across a variety of genres.  The Little Hours (2017), yes the raunchy nun romp is directed by a man, but there is no doubt Aubrey Plaza (whose boyfriend directed the film) that has a lot of control.  Profanity, dry sarcasm, and deadpan absurdity fill the mostly improvised dialog, and it contrasts with the saccharine purity of choir music. Hildegard von Bingen is vital to the period comedy’s soundtrack, and that choice is deliberate as she is a keystone in medieval sacred music.  As with any comedy, sound effects and their timing are essential to the jokes. The setting is isolated, nature surrounds the scenes, and many jokes are about keeping silent or listening for little sounds. Andrea Gard, the foley artist, had many punchlines riding on her shoulders. Patience was rewarded, in a way that some films, like Guardians of the Galaxy (2014) and The Hangover (2009) do not have time for.  In fact, the whole opening sequence with the women’s choir is a lesson in waiting.  Even with the extremity of the comedy, this feels more naturally feminine than Bridesmaids (2011), another female ensemble comedy.  For all of the pink dresses and drunken karaoke, explosive diarrhea and vicious catfights do not have the same nuance as an old crone’s whistling breath.

An example of femininity in the thriller category is Into the Forest (2015), a tale of two sisters’ survival directed by Patricia Rozema.  The foley artist in this film was Sandra Fox, sound effects editor was Katie Halliday, and they are joined by several other women on the sound team.  This film was full of intimate moments and loneliness. This was not an apocalypse of explosions and running, but of impending isolation and staying still.  Even with the amount of quiet and the lack of volume of this film, there were moments like rhythmic diegetic sounds to portray perseverance and intensity. The two sisters face two ends of the femininity spectrum, and while they falter at times, in the end, there is balance.  Neither sister could survive without the other, and their tenacity is woven into the soundtrack, both ambient and musical. Meek’s Cutoff (2010), directed by Kelly Reichardt, is similar in many ways to Into the Forest, with its survival elements and solitude in nature, but it is set on the Oregon Trail.  The time period, location, and thematic elements would normally call for raucous gunfights and shouted threats, but instead, the families are slowly lead to their fate.  The prairie wind dominates the design, and the desolation is matched by the scarcity of animal sounds. Leslie Shatz, sound designer, gives us the subtle and claustrophobic silence that gnaws away at the confidence of the guide and builds the despair of the group’s situation.  Silence should not be confused for passivity. Another big thing to note is that in the world these women are from, they are homemakers and not survivalists, but they are determined to endure. I found it important for Shirley Henderson to get serious screen time and dialog with a voice as iconic as it is.  She is not an exaggerated parody, like her turn as Moaning Myrtle in the Harry Potter franchise, but a real human lost in the expansive West.  With a focus on the female pioneers, the sounds of the West morphed and provided a refreshing take on a cliched genre.

Femininity is not treated the same across genres with the variety of films I listed with proactive female crew members, and that is important.  John McClane in Die Hard (1988) does not have the same masculinity as John Wayne, so why should femininity get the cookie cutter treatment?  There are complaints of Hollywood remaking the same films for box office draws instead of risking on original screenplays.  With the all women reboots, instead of just changing the cast and calling it a day, there are capable women behind the scenes that can provide nuanced direction to revitalize the industry.  Thanks to the many organizations and celebrities who are using their power to bring up the nontraditional film crew, there are many outstanding choices. For those truly original scripts that happen to feature femininity, instead of resorting to tired tropes of damsels, why not branch out to a multifaceted embodiment with resilient, subtle, conniving, elegant, deliberate? Why not let them exist for themselves, and center a world around them? There is a sonic world out there ready to be explored that is not just weak or anti-masculine.  Femininity is an underrepresented frontier, and the world is ready for it.