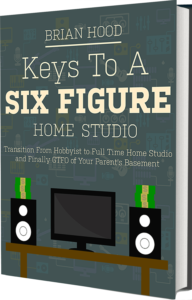 When I first heard about The Six Figure Home Studio, I was skeptical. Who was this guy and was he really making six figures? Could a 31-year-old engineer/mixer really have enough experience to give solid advice to the thousands of people coming to his site?

I was surprised to find what Brian Hood has to say has a lot of value. In six years, he grew $5,000 and a studio in his parent’s basement to a 6-figure income (gross/pre-expenses) business in Nashville. He recognizes common business struggles for home studios (and freelancers) and has come up with easy and practical tools to help. I reviewed the website, podcast, video series (free portion), mailings, and Facebook group. A few elements stood out as the best:

I Publicly Shared ALL Of My Studio’s Income, Expenses, and Tax Numbers

Brian posted his business earnings from 2014 (month by month) and yes, it was over six figures (around $120,000). The catch: After expenses and taxes his net income was around $50,000. This is an excellent case study of the reality of owning a home studio.

(link at the bottom of the page)

This is a free download if you give an email address (which does sign you up for the mailing list). The rate sheet is geared towards music production but has a lot of great advice and the rate ranges provided seem reasonable and realistic.

The first two rules for this group are “No gear talk unless it’s related to business/budgeting/growing your bottom line” and “No mixing talk. There are more than enough groups for this.” It feels like a community – the conversations are interesting, and everyone is treated with respect (including the women in the group). It’s a great resource for business questions.

This free “course” is a collection of videos that can be watched in about an hour. In the videos, Brian gives simple suggestions how to start a business and create a plan. It’s worth it to sign up for the video about sales where he talks about how to target potential customers (including online strategies).

Article: Why Most Home Studios Fail To “Make It” (Spoiler: It Has Nothing To Do With Marketing)

Brian has created “The Home Studio Hierarchy of Needs” which shows “the fundamentals necessary to create a successful, profitable, flourishing home studio business.” When it comes to finding business, studio owners (and freelancers) tend to work in a lot of different directions without much focus. Brian breaks this down into a process that is easy to understand and implement.

This is an assessment based on his above “Home Studio Hierarchy of Needs.” It only takes a few minutes (answering questions on a scale from low to high). The questions range from your social skills to beliefs about business or marketing. The results help zero-in on problem areas such as “skills & knowledge,” “relationships and ethics,” or “profit and maximization.”

I love the overall concept (a business resource specifically for home studios), but sometimes it comes across as just a personal blog that’s Nashville-centric. I was hoping to see perspectives from a variety of professionals, but the only views other than Brian’s were on the private Facebook page and the podcast’s second host.

While I see value in the site’s paid content, I fundamentally disagree with targeting colleagues (versus clients) for profit. Most professionals in our industry will offer information for free to support colleagues in times of need. We’re all running businesses and everyone doing this has tricks and “secret sauce” that could probably help a lot of people. This site sells it openly; there’s a $695 program that essentially is a mentorship. That’s a lot for a struggling business or someone getting off the ground. It’s like a neighbor asking for sugar; you could ask for money but is that what’s best for the relationship in the long run? In this field, sustaining is about the long game – not the race to the top.

Lastly, in the videos Brian says many times, “I know guys who do this” or talking about “getting connected to the right guys.” I was surprised to hear it given that female engineers and mixers do exist, many of us own home studios, and inevitably one (or many of them) would find the site. It’s disconcerting for a site that’s promoting itself as “The #1 Resource For Recording Studio Businesses” and over 9,000 Facebook followers to be speaking as though women in the industry don’t exist. If nothing else, I hope this is remedied in the future of the site.

Business education is lacking from audio education curriculum, and it’s often low on the priority list for a lot of freelancers and home studio owners. Owning a studio is about so much more than what gear to buy or learning how to mix better. The Six Figure Studio fills some of the business gaps and offers some interesting and valuable content on the topic. But, it’s also a site somewhat early in its own growth and expertise. There’s a lot to take from it (with a discerning eye).