The Audio Girlfriend’s Guide to Pregnancy 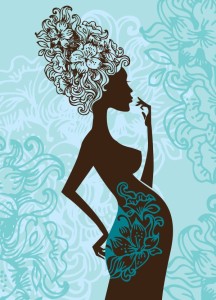 Pregnancy and audio industry aren’t exactly two terms you hear together. As I look back on the past 9 months of my pregnancy, I laugh at how little I knew – I thought pregnancy meant being sick in the morning, going to the doctor more often, and eventually wearing flip flops and not reaching the EQs on the console. Pregnancy has been a challenge mentally, physically and emotionally and can completely take over your life at times. It’s also been a fun and fascinating experience – one that can be balanced with work if you’re flexible and can adapt to your new (and changing) limits.

There’s no anticipating how good or bad you will feel. Some women have no symptoms and others can’t keep down water. You really won’t know til you’re there.

Morning sickness can be like the worst hangover ever for weeks. You know the feeling when you’re at a greasy diner with a horrible hangover and the smell of food makes you want to vomit but you know you need to eat to feel better? That was 23.5 hours a day for me for 6 weeks.

Your nose/palate can dictate your lifestyle for a while. Normally, if you smell or taste something rotten or unappealing there’s a mild reflex saying “eww”

During pregnancy, the body reacts more like,“EMERGENCY! YOU INGESTED POISON!!” (even if it’s a whiff of a food truck a block away). I was “lucky” to only have nausea and usually could get to fresh air if something triggered me (like a coworker’s burnt popcorn). Some women can’t go anywhere without scouting out the nearest trash can, toilet, or bush because of a more visceral reaction to smells.

Eating is hard on a schedule. If you feel continually sick and there’s a small window where you feel well enough to eat, you need to eat. It’d be tough to be in a work environment where you can’t snack or only have designated meal times.

During the weeks I wasn’t eating much, my fuse was short, I didn’t have much of a filter and I had no patience for BS or attitude. I didn’t take on extracurricular gigs or stressful work during this time knowing my client etiquette and demeanor would probably be poor.

Exhaustion can be overwhelming – I had a yoga mat in my recording booth and would sometimes take a quick nap during breaks. Working swing shift was great because I could sleep in or leave work a little early if I was having a rough day.

First trimester can be isolating. All of this is going on and you may not feel comfortable telling anyone. It can help at work to have someone in-the-know who can nudge the crew to eat their smelly pizza elsewhere or change the topic when someone teases you for not going out for a drink.

Forgetfulness. The struggle of “pregnancy brain” is real. I was guest on a podcast and could not remember the names of the plugins in my channel strip that I’ve used daily for at least 5 years. At work, I had to take extra notes and sometimes ask for detailed/complicated things in writing.

Need to focus on something? Good luck. Normally I have laser focus and can work for hours without being distracted. During pregnancy, I sometimes felt like a kid who was hyped on sugar and had a puppy in the room. I had to plan for extra time on mixes knowing I might get totally sidetracked or completely forget what I was doing.

Peeing all the time. There’s a reason for the old saying “bladder of a pregnant woman” (It’s hormone related.)

Even with all this going on, you might feel like Super woman. In my second trimester I did a demanding scoring session in Canada (with long work days) and spent a week in Europe walking 5-10 miles a day. In both cases, I felt great (and ate more than the people I was traveling with).

You’ll start feeling the “thing” that’s living in your body. I’ve never been so excited to be kicked in the stomach.

Baby can hear! Babies start to hear between 23 and 27 weeks (especially low frequencies) and they can be startled by loud sounds. My little dude would often get squiggly/active when I was mixing. Studies show that babies recognize their mom’s voice after birth and will recognize patterns they heard while in utero (like if you read the same story out loud every day).

You will have some physical limitations. As your belly grows, little things become difficult (socks are my nemesis). Heavy lifting restrictions may start earlier in pregnancy, too, in part because of a hormone called relaxin which causes your joints to loosen. Belly weight isn’t necessarily the source of discomfort, either – your organs (and someone else) are moving around,too.

People may step in to help more than you want. People have good intentions but sometimes visibly pregnant women are treated as disabled or incapable. Staying active through pregnancy is great for your health (and your recovery). One thing I find funny is how often someone offers their chair or insist I sit when I’m more comfortable standing or moving around. But, there’s also times where the offer for help (or the chair) is welcomed.

You never know if/when you’ll be forced off your feet. I was shocked to be admitted to the hospital and put on bed-rest at 29 weeks when I felt fine and worked the night before. I was planning to work as long as I physically could but ended up on disability for over two months instead. Luckily I had a backup plan – I already had arranged a backup person every freelance gig and my main job had a substitute list in place. Financially, I had prepared for some unpaid time off with an emergency fund (for a “worst case” scenario).

Things to consider when you’re working and pregnant:

There’s times you can’t function at full speed. This especially applies to the early and late months. Early on, I kept my schedule light and didn’t commit to anything more than a week ahead (when possible). I also turned down gigs unless I knew for sure I could handle it (I passed on a gig in China during peak morning sickness, for example).

It helps to work for companies/clients who can accommodate you in an emergency. A few years ago my husband broke both his arms falling off a bicycle. The studio I was freelancing with at the time didn’t have anyone prepared (even in case of emergency) so I had to leave him at the hospital and go in for the session. After that, I refused to ever be in a work situation like that again. Pregnancy has been much less stressful knowing that my employer can find a sub (same day, if needed) or that my clients know up front I may brin g in a backup person in case of emergency.

Guy awkwardness. One of the times it can be difficult to work with a team of guys is when you have something “female” going on. Once the weirdness passes (if there is any), pregnancy can be a fun topic to talk about – especially the name suggestions and bizarre questions.

Girl awkwardness. Being “one of the guys” in this field may also mean we don’t have many girlfriends let alone close ones who can pass down maternity clothes or give advice on breastfeeding. The jump from Audio Engineer to Mom can be completely foreign. Part of the challenge is finding resources and people who you feel comfortable asking for that kind of support.

You may get philosophical about your career. There’s a lot of questions about what your new life will look like. How do you want to balance work and a baby – or are you going back to work? If you are career-oriented or pride yourself on your work accomplishments, how are you going to handle being away from that? How will you balance your own identity and needs with your kid’s needs? Are you prepared to be “Mom” sometimes before “engineer”?

It’s sad, but loss happens in pregnancy more often than you’d think. It’s estimated that 1 in 4 pregnancies end in miscarriage (the majority in the first trimester). It’s not something that many people share openly until you go through it yourself. Loss can take some time to recover physically, mentally, and emotionally. It’s also reason to be careful about when (or if) you share your pregnancy publicly (especially on social media or with colleagues you don’t know well).

Sometimes you see the doctor A LOT. Even in a healthy pregnancy you may be seeing the doctor weekly or bi-weekly as labor approaches and they’re usually only available during the day. I’ve had more doctor visits and medications in the past year than the past 10!

If you are a contract worker (in the US), pregnancy protection laws may not apply. As an employee, your employer is legally required to hold a job for you for a period of time (even if your maternity leave is unpaid) and can’t fire you for being pregnant. Contractors don’t have the same legal protection.

Emergencies can come up. There’s probably going to be at least one unplanned doctor or ER visit. If I was working out of town (or out of the country), I’d want to have a logistical plan in place in case I needed to get to a doctor/hospital and a gig replacement ASAP.

In theory, you can work til labor. It’s totally safe to travel until late in pregnancy (each airline has a point where you need a doctor’s note to fly). One of my doctors said she preferred her patients to stay working, saying,“You could take time off, but I don’t’ want you sitting on the couch eating and worrying.”

Or you may be forced to stop completely. One in ten women deliver prematurely (before 36 weeks) and babies over 24 weeks have a good chance of survival. At 6 months pregnant most women aren’t thinking or planning for delivery but it’s a risk that’s worth planning for. I’m looking forward to my new “gig” (and to meet my new little assistant). I hope other women will share their stories of pregnancy and parenthood so we can create a resource where one doesn’t really exist.

April Tucker: April holds both a Master’s Degree and a Bachelor’s Degree in Sound Recording, and has over 10 years experience in the field. April works primarily as a re-recording mixer and sound editor (based in Los Angeles), but also has experience as a music editor and mixer, and ADR and Foley engineer. She recently became a mother to wonderful baby boy.