We will be doing pre-production in London, Ontario, not quite the ideal place to be if you forget something or get additional gear if you need it. So there are many weeks spent organizing, ordering, specing, and prepping all the additional gear and parts needed for the new monitor system. I also have to design two other systems for this run – a separate monitor system for an acoustic foh stage and an effective way for the techs to monitor their rigs and communication for stage.

The acoustic stage should be relatively straightforward. The ideal choice for monitoring would be stereo in-ear mixes for the entire band. This would be too easy though; I anticipate they will want a set up that is similar to the main stage. A combination of wedges and ears. I decide to make sure that I can accommodate whatever they want and spec another monitor system. FOH and Monitors will have to come up with a solution to deal with the delay.

The tech wings are currently two feet high, and we are dropping the wings to one foot high. This will severely limit their ability to hear the stage rigs. Currently, I provide two of the techs their own mono mix and the other techs each get a pack with their guy’s mix. I decide each tech should get their own mix, but I don’t have enough outputs for this. I decide to put them on a Midas Pro-2, which will double as the support board.

The basic clear com we use to communicate between stage right and left is not useful anymore. During the show – I am focused almost solely on Ed, and rely on the techs to relay information to me. Clear-Com lately is like playing telephone (or was it operator), and I get many requests for instruments to be turned up in the wrong mix or sent somewhere they have never been sent before. It is also unfair for the techs onstage to run back and forth.

I place a talk back mic on the stage right wing, behind the drum riser, and on the stage left wing. The techs will need to wear their ears, and I figure I can monitor them through a Hot Spot.  Easy as pie. I was so wrong. Mixing for techs is harder than mixing for a band, on the first day of rehearsals it becomes clear to me, that I can’t deal with the techs and their requests. Peter takes over mixing for the tech, but soon I find I no longer have a tech. Talk about a can of worms. Thankfully we have a second monitor tech, and he takes over. Thanks, Derek Van Ord. I hope once the novelty wears off it will settle down.

We have a week of production rehearsals – unheard off – We have never had this long – And lights will have already loaded in when audio gets there. It gets better still – back line is loading in a day after audio. I have three days with no band and three days with the band, a show and then Wrigley Field.

Load in and set up goes easy enough, and we can eq the monitor system the first day as well as get all the RF done for IEMS. We get the side fills up – and play with them. They are fairly washy – but I decide to set three levels for them

The second day back line loads in, and after they are set up, we do a line check. The backline techs play while we take  SPL measurements at key positions on the stage.

These are the average readings

We break for lunch, and when we come back, we put the baffles up. We run baffles on each side and across the front of the drum riser. We run baffles around Ed’s guitar rig, and place baffles in-between Jeff and Mike’s rig and in between drums and Stone’s rig. We take new readings, and they are promising.

Jeff’s world has the most volume reduction overall – dropping at his bass rig between 116 and 117 dB. His world was probably the most affected by Ed’s open back guitar rig – blowing underneath the drum riser and into his world. Standing back in Jeff’s world – both Ed’s guitar and Mike’s guitar rig volumes have dropped. The bass rig is clearer, and you can hear the drums acoustically. This is super exciting. 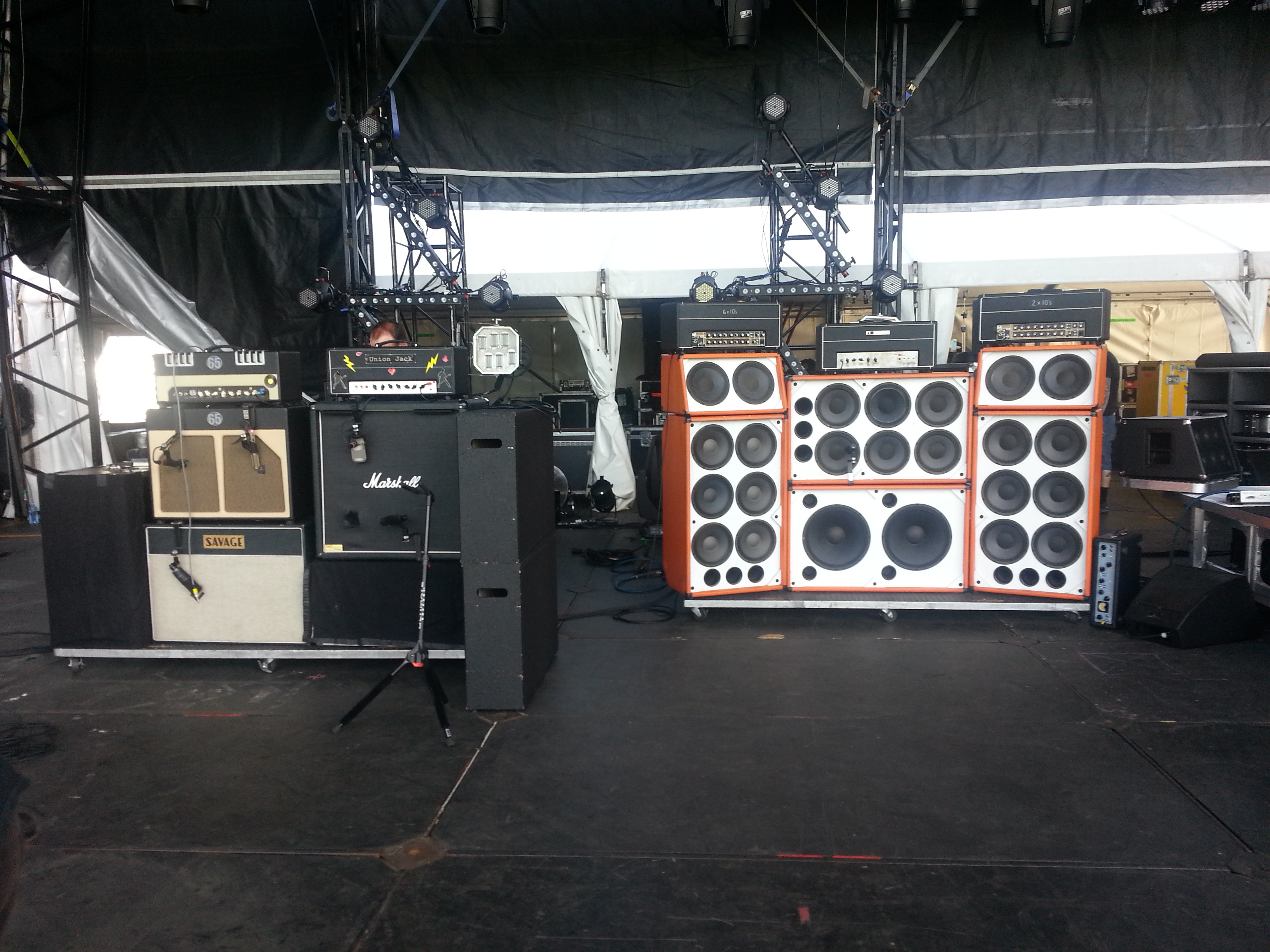 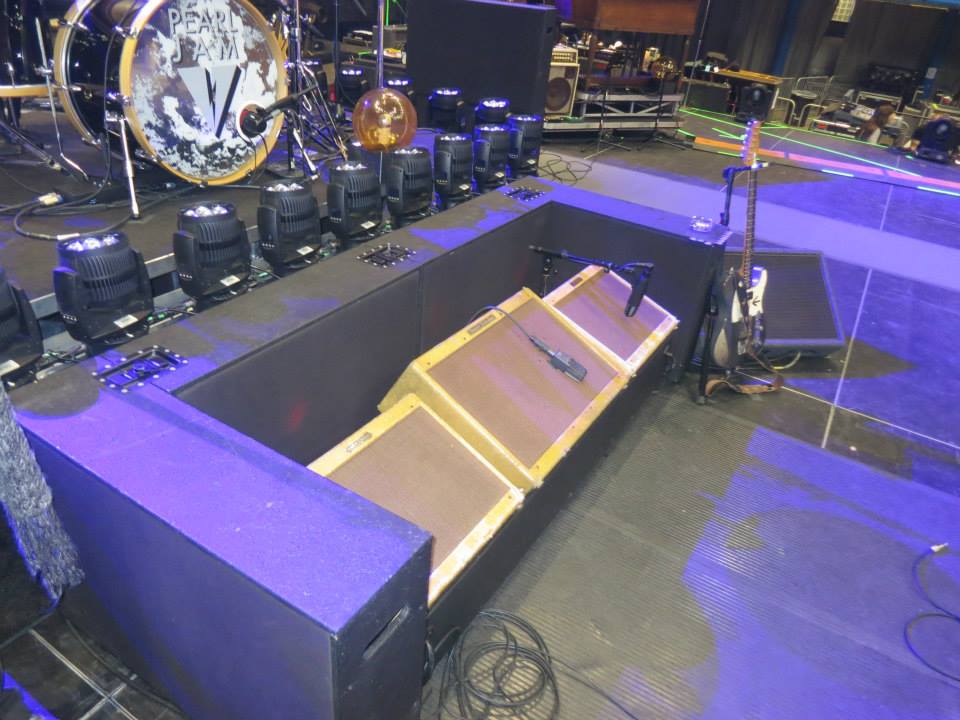 Ed’s position has not dropped in volume – but what has happened is a huge reduction in high end bleed from Mike and Stone’s guitar rigs. Ed’s rig is not as blurred but more focused down the center. This is super exciting as well. 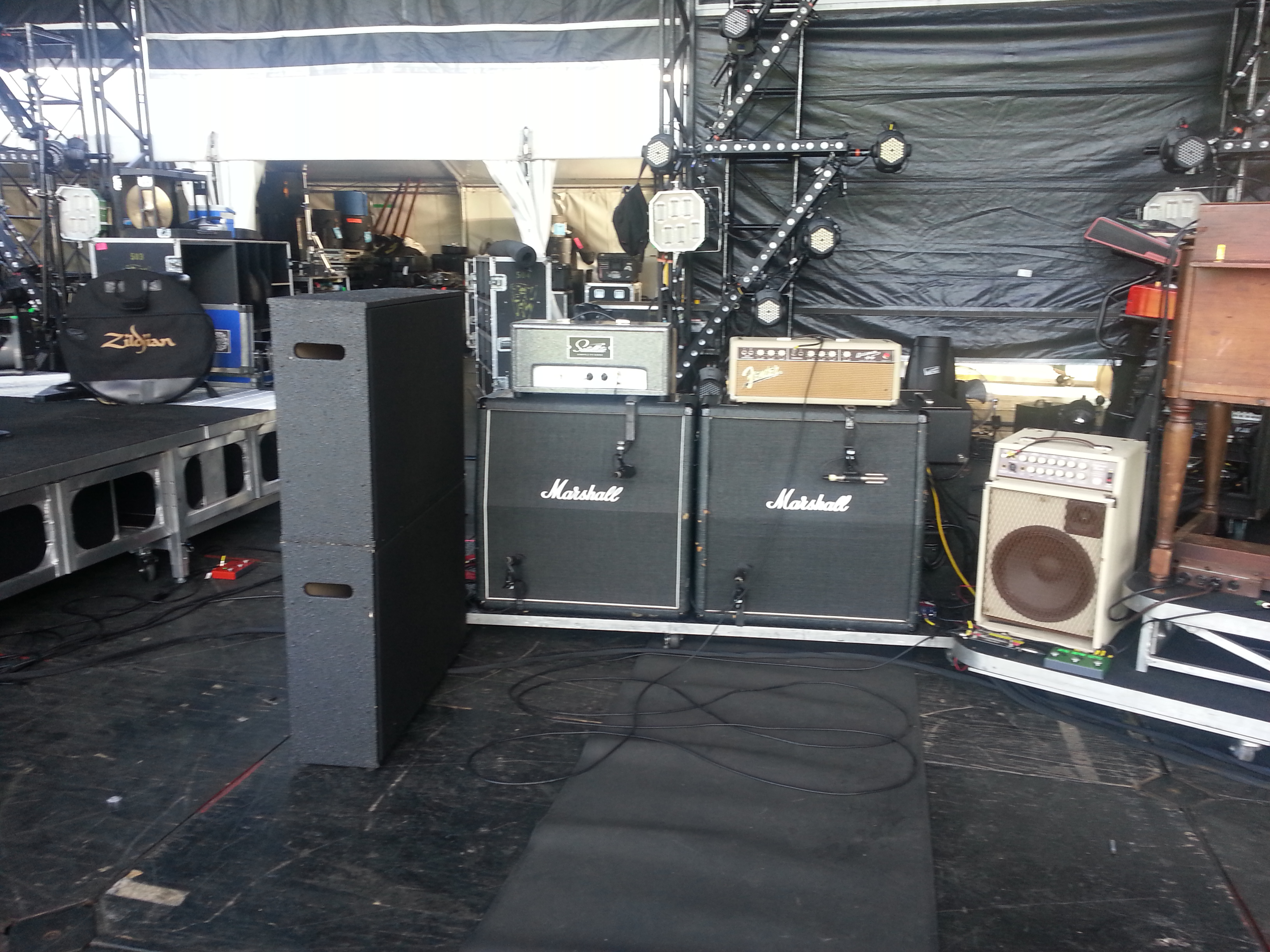 Baffles between Stone and Drums.

Stone’s volume does not drop – but the baffle in between his rig and the drums are isolating his sound and keeping it in his world.

Boom- No noticeable drop – but we did remove one Leslie cabinet, and it lives offstage ( I am still unsure how it ever got back onstage)- reducing volume from the B3.

New Drum Riser with wedges underneath

Matt- His world drops to 116 dB. He no longer is getting blowback off Ed’s rig, and nothing else is getting in under the drum riser either. The drum wedges have dropped underneath the riser, eliminating drum mix bleed at the center of the stage and into the drum mics.

Matt has been running a bass cabinet back in drum world for ages, but recently it has become more noticeable for Jeff and Ed. We replace the cabinet with a smaller one which can now sit on the drum riser, providing us better control over it

I am super excited about the overall reduction in stage volume and wash. No one has had to turn down their rigs, the cabinets are not pointed off stage, and the baffles are not really noticeable.

Alice in Chains has a show in the middle of our pre-production, so we load out everything to load it back in after their show. The reload in day the band is only supposed to come in to look at the new lighting rig and to say hi. This of course changes and they decide to rehearse. This is where I make a crucial mistake – letting them onstage with the PA on, in a not very nice sounding arena. We can’t really make heads or tails of any changes.  I have not put up the baffles at this point. I want them to actually pay attention to the difference the baffles make. They are tired from flying and not focusing on any changes made or the lights. I think we are all shell shocked from a big loud, nasty arena sound. Ed says he can’t really hear the side fills. We all finish the evening with headaches.

The next day I decide I am going to have to be proactive and get the band to focus on these changes. I decide we are going to go through the changes one at at time with the PA off. We start by making sure everyone is okay with the amount we have opened up the stage, and again measure the SPL onstage. I then let the band get use to the side fills and determine what volume they are comfortable with, we settle on the middle volume setting.

We take a break for dinner and then set up the baffling. This gives the band a clear sense of the before and after sound. The after is dramatic and there is excitement. It is relayed that it finally feels like the beast is under control. I was hoping the baffles would help to control the stage sound, but it is working better than I even dare imagine. It is working so well that all of the sudden stage right needs Stone’s guitar reinforced – unheard of.

Part of the redesign was removing the ground support side fill on stage right, as it was killing Mike, now Jeff wants it back to put Stone’s guitar in it. It has always been give and take on stage right to balance the sound needs of Mike and Jeff. Jeff over the years has pushed his rig further and further upstage to be closer to the drums and out of the immediate volume of the stage. Since Jeff spends a lot of time back in this pocket, the side fill is not going to provide adequate monitoring of Stone. I suggest adding a wedge back by his bass rig to provide monitoring. This works great, and both Jeff and Mike are happy. 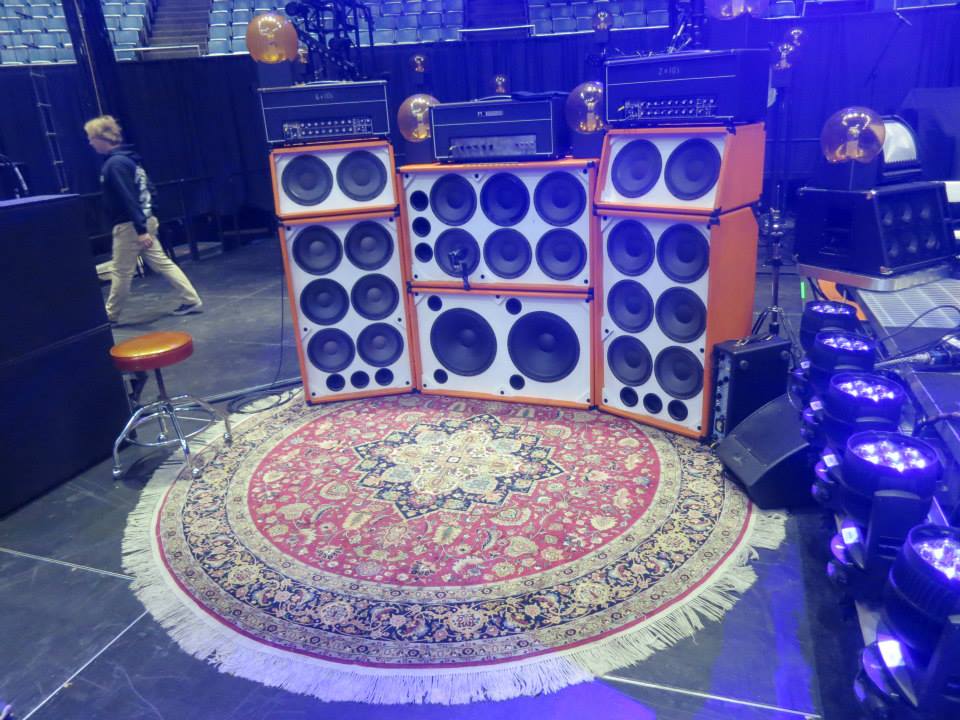 We continue to rehearse that night with the PA off, and everyone is excited and happy with the sound. The next day we turn the PA on about halfway through rehearsal, it is still loud and washy – but the band seems to be happy. Later I talk with the band, and they are pleased with all the changes. They said they knew they were in a terrible sounding arena, but the changes have made it sound like a good sounding arena. Yes! All the work, research, guessing, and hoping has paid off.

Show Day – goes well and we head to Wrigley Field. Wrigley goes great – despite the challenging weather. The band is happy, I am happy, we are ready for a fall tour.

The audio quality is lacking, but you can see the baffles and stage set up nicely.