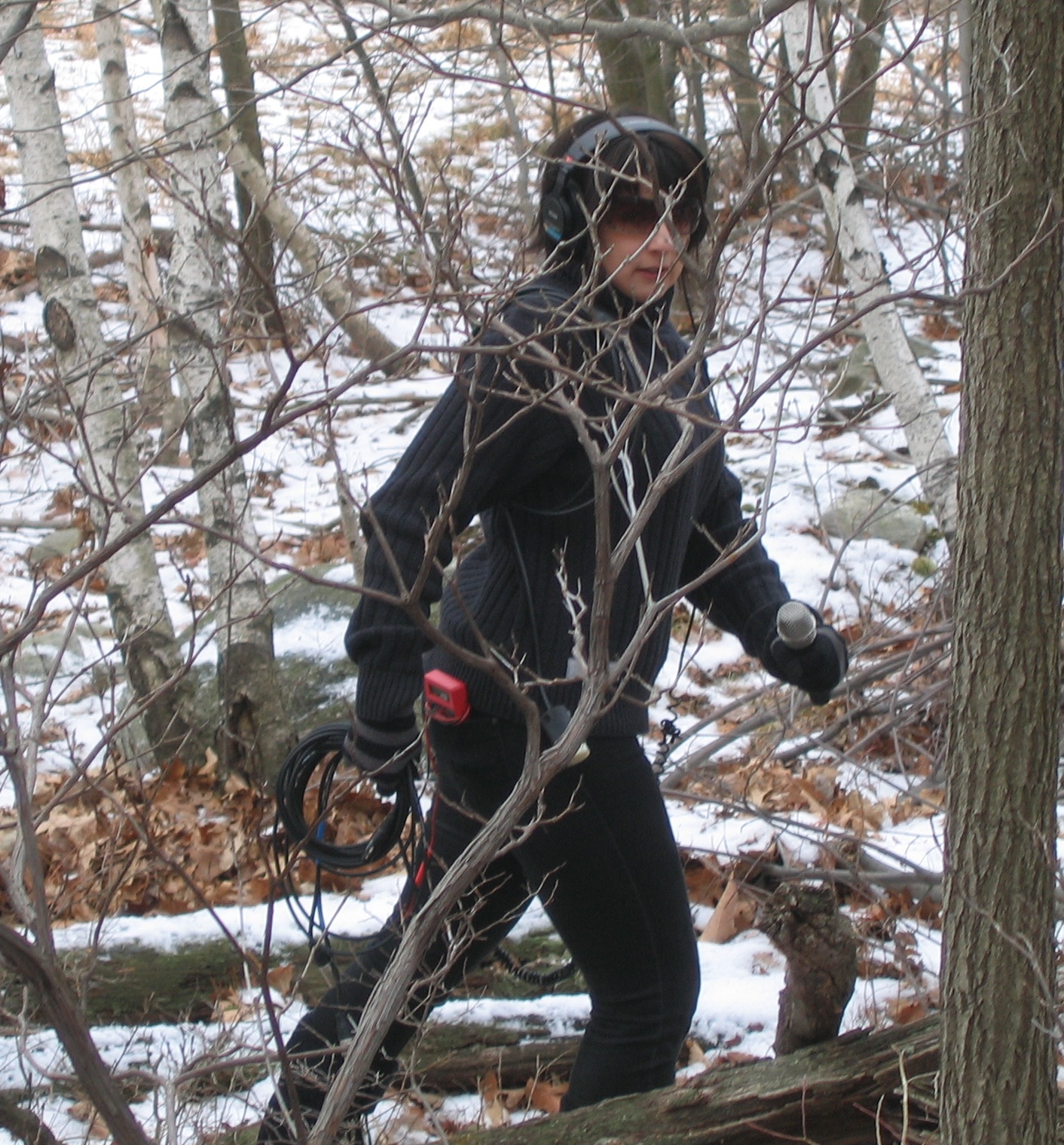 At one time, thought to be the stuff of myth or folklore, much like the Yeti or Bigfoot, stories and sightings of the elusive woman audio engineer are becoming more widespread. With the abundance of digital cameras and smart phones, there has actually been some credible evidence verifying that they do in fact exist.

Here on Soundgirls.Org, we talk about women making up only 5% of audio engineers. Whether that number is increasing or declining or just holding steady is hard to tell but I would like to think we are progressing in some measure. 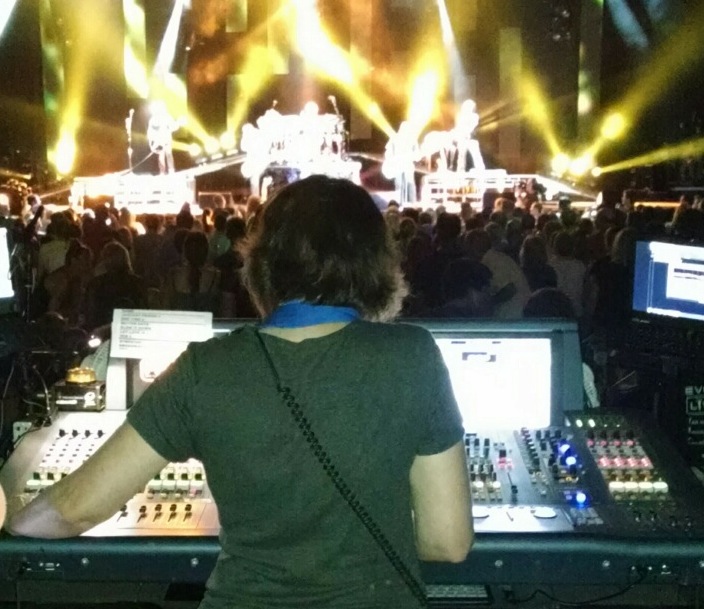 Soundwoman in her natural habitat

Every day I am introduced to more and more young women interested in audio and music production. Friends of mine are asking me to talk to their daughters or friend’s daughters about what I do because they have suddenly expressed interest in the technical side of making music. Karrie and I are continuously learning of schools and camps with programs dedicated to teaching music and sound to young women. Things like that were unheard of when I first decided to enter the field of audio way back when. And YOU- the number of SoundGirls.Org members has been growing daily since we first launched nearly two yeas ago!

I am always delighted when I meet young women who have a passion for music and sound who are working tirelessly at living their dreams. I’ve had the wonderful opportunity to meet some of our members over the past year while on tour, and I’ve been so inspired and touched to hear how you are pursuing your dreams and following your passion. 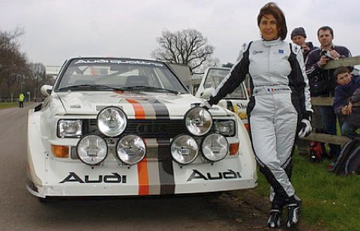 Things have changed, maybe not as fast as we’d like but then again this is a very unique lifestyle, and not everyone is suited for it or even desires it. Auto Racing was once (and very much still is) thought of as a man’s world. Thanks to women like Danica Patrick, Shirley Muldowney, Michele Mouton, and others, women are finding out they can do it too. But not every woman aspires to be a race car driver. I would never even entertain the thought- 1) because I hate driving and 2) I wouldn’t want to embarrass my husband who happens to be a very talented racer himself.

When Sally Ride was chosen to be the first US woman Astronaut, she had to endure questions like: ” Do you weep when things go wrong on the job?” and, “Will you become a mother?”. * Surely none of the male astronauts had to endure these questions. I am reminded of one of the most inane questions I have been asked over the years- “What’s it like to be a female sound engineer?” The best response I’ve got is (and I borrow this from comedian, Amy Schumer) – ‘uhm, I pee sitting down.’

When I first started touring, I would hear, almost on a daily basis, things like “ you’re the first female engineer I’ve ever seen”. Quite honestly, I was the only one I knew. I didn’t care, I never gave it a second thought. It didn’t deter me from  doing what I wanted to do. I learned from the guys I worked with. To me, a mentor was a mentor it didn’t need to be a woman. Then again I was the kind of kid who grew up reading and watching stories with male heroes and thinking- ‘I can do that’. It never occurred to me that because the hero was a guy it always had to be a guy. I totally related to Luke Skywalker wanting to get off that hell hole of Tatooine and follow his dreams, as much as I did to Princess Leia- the feisty, strong, female lead who I thought was as much of a hero as Luke and Han. OK, so I’m showing my geek side. What I’m trying to say is that I didn’t put limits on my gender even if the media and popular culture did. I always had the attitude that anything was possible if you wanted it bad enough.

Very early in my touring career, I had heard of Karrie Keyes; she was working for Pearl Jam at the time and I thought- ‘oh cool, another woman.’ Shortly after that I met Deanne Franklin who was mixing Spearhead. For many, many years they were the only other women I knew of in live sound. Fast forward a decade or so and I have been on not one, but two different tours where I was the FOH Engineer and the Monitor Engineer was also can you believe it? A WOMAN! Instead of hearing “you’re the first female engineer I’ve ever seen”, I routinely hear, “hey do you know so and so (another woman sound engineer)?” I wouldn’t go so far as to say we are becoming common place but at least not as unusual.

I still run into puzzled looks and strange situations now and then from the less fortunate who have yet to meet or work with a female audio engineer. I find those times more humorous now than derogatory.

None of this has ever hindered me from doing my job. To this day, it’s not uncommon for me to walk into a venue and be directed to the production office or wardrobe rather than FOH. I don’t let it bother me. The staff isn’t being sexist they just are used to seeing more women as PAs or wardrobe than in Audio. When I politely correct them that I am the sound engineer they usually offer a quick ‘sorry’, and we both go about our business. Years ago when this would happen, I would on occasion be met with profuse disbelief. Whatever, it didn’t matter, and while it got annoying at times, it still didn’t interfere with me doing my job. More often than not, these days when I announce that I am the FOH engineer I hear “oh cool!”.

Maybe I’ve softened as I’ve gotten older, or maybe I’m just more confident. When I first started out working in clubs and used to get hassled by the bouncers because they thought I was the soundguy’s girlfriend and wanted me to pay a cover charge, it would really grate on me. In fact, I always got more grief from bouncers and security than I ever did from local crew or bands. It’s ok, meatheads need jobs too.

I’ve had the occasional creepy local system tech who thought that part of his job was too give me a back rub while I was mixing the show- EWWW and uhm NO!

You gotta give ‘em a break after all most guys got into sound because they thought it would be a cool way to pick up chicks. So, its only natural for them to think we women are in it for the same reasons. Little do they know it’s all part of our bigger plan to take over the world.

As things progress and more and more of the fairer sex begin to spread like a virus into live sound, as system techs, engineers, PA techs, etc…they’ll just have to get used to us taking breaks between soundcheck and the show for mani/pedis, trading beauty secrets on the comm between songs, having pillow fights in the back lounge, and devouring all the chocolate in sight as we huddle up in the fetal position and sob for one week every month.

I believe that now, in 2015, any woman who wishes to pursue a career in audio has many more resources available to them than myself or Karrie did when we started out. There is a long list of schools and programs online and off where you can learn the basics. Just yesterday I was made aware of Sound Women– a UK based organization for UK based women in the Radio and Audio Industry. There’s also Mulheres Do Audio in Brazil. Organizations like SoundGirls.Org, WAM, and Girls Rock Camps are helping to spread the word to young women that this business is not just for men.

I am and always have been a firm believer that a woman can do and be anything she sets out to be. I don’t know that the number of women working in audio will ever be equal to the number of men in the business, I’m ok with that as long as the women who DO want to pursue this field have the same opportunities as the men.

Credits:
Photo of Michele Mouton- http://motorfull.com/2007/03/michele-mouton-volvio-al-volante-del-audi-sport-quattro
Photo of Sally Ride- http://dayton.hq.nasa.gov/IMAGES/LARGE/GPN-2004-00019.jpg
*From: ” A Ride in Space” by Michael Ryan in People Magazine June 20, 1983