June 20th officially marked the first day of summer, which means we are practically halfway through the year! Somehow the never-ending 2020 is managing to pass by in the blink of an eye. I’m still trying to wrap my head around the fact that we have been in quarantine for nearly 4 months now. I guess time flies when you’re stuck inside! Luckily, the world is slowly beginning to reopen just in time for us to enjoy the sunshine.

With the changing of the seasons comes a whole new world of sound. So, let’s discuss some key summertime sounds to keep an ear out for and record to bulk up your SFX library this time of year! 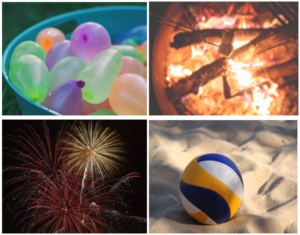 Fireworks: Most towns have a celebratory firework display every 4th of July. Click here to check out a helpful blog post written by Boom Box Post-co-owner Jeff Shiffan about recording sound effects with your phone. In the post, Jeff uses fireworks as an example! Who knows, maybe you’ll also get some cool crowd reaction walla. I know I’m definitely that person who OOH’s and AHH’s way too loud at a good firework show.

Badminton/Volleyball: If you can get your hands on a badminton or tennis racket, quickly swing the racket back and forth to produce different swish/wipe SFX’s. These types of sounds are really handy to have in your library—especially when working in animation.

Ice Cream Truck: Does the ice cream truck not visit your neighborhood? That’s ok, you can make your own! Did you know the iconic music played by ice cream trucks across the world is public domain? The melody is from the folk song “Turkey in the Straw”. Download yourself a clip of the tune and throw it into a plugin like Doppler by waves. Make sure to check out these two blog posts (The Doppler Effect, Creating Motion In Sound Design Using Pitch) for tips on how to create the perfect “by”!

Slurpee Slurps: When I think of summer, I think of night drives with my friends to the local gas station for slurpees. Who doesn’t need a good straw slurp SFX in their library? I feel like it would come in handy more than you would imagine. Any tumbler and straw will do the trick! Although, if you can get your hands on a slurpee I recommend the Coca-Cola or banana flavor.

Boom Box Post and Kate Finan: After receiving a Bachelor of Science in Sound Recording Technology, Kate began her career as a post-production sound effects editor. Over the next several years, she worked her way up to being a supervising sound editor at Warner Bros. and then left to start her own studio, Boom Box Post, with business partner and fellow supervising sound editor, Jeff Shiffman. Together, they lead post-production sound crews for animated television series.  In addition, Kate also acts as the re-recording mixer on several series. Recently, Kate and Jeff have launched an additional venture, Boom Box Library, which creates custom sound effect libraries as well as software to aid in the sound design process.  Over the course of her career, Kate has been nominated for MPSE Golden Reel Awards, Music + Sound Awards, and a Daytime Emmy. You can read more about her company and enjoy additional blog posts at www.boomboxpost.com.