Sound Design in Another Medium

Sound Design is creating a world or character purely out of auditory vibrations.  We morph mood and meaning through music and sound effects. As showcased through pieces like Peter and the Wolf by Nikolai Rimsky-Korsakov, the aural medium can tell the story on its own.  More often than not, however, sound design is not a monolith and must integrate with visual mediums.  This opens the door for visual style elements to influence sound design.

When I took Sound Design as a course in college our main textbook was Understanding Comics: The Invisible Art by Scott McCloud.  McCloud boils comics down to its essence, choosing to focus on the assembly of narrative and representation rather than technique.  The philosophy behind choosing what to include and not is similar between the visual and the aural. Elements of design (rhythm, focus, contrast, form, movement) are also shared.  Using McCloud as a guide, take a look in the graphic novel section of the library as research for your next project. But why stop at visual, where else can we find inspiration?

The human body was gifted with several senses, and all of them can be used to evoke emotional responses.  Taste is an experience that occurs over time, but is remembered as a static moment, much like a song. That particular meal has a temperature, different flavors competing and complimenting, and overall texture.  A song has dynamics, different instruments with melodies and harmonies, and an overall mood. Maybe the character in that particular film has a favorite meal that defines them. How should the accompanying theme add to the character development?  Think of Pippin singing to Denethor in Return of the King from the Lord of the Rings trilogy, a greasy meal, tomatoes popping and gristle squishing contrasted with Pippen’s haunting ode to his comrades in arms.

Another sense, smell, also shares similarities to sound.  While perfume is just as manufactured as a pop tune, it has the opportunity to provide insight into character design.  Imagine a femme fatale adorned with a power suit, her chosen scent is bound to be as bold as she is. Like sound, it also transforms through time.  When she first enters the scene, her interactions with those around her, and what happens in the wake of her absence correspond to the “top,” “middle,” and “base” portions of the bouquet.  Film cannot capture scent, yet, but the sound design can pick up on the “notes” of her cologne. 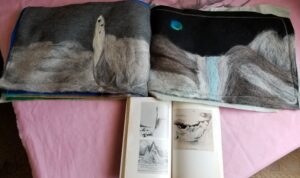 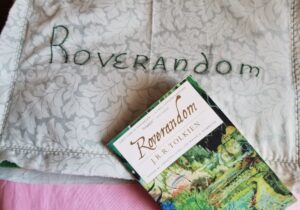 I recently have had the opportunity to try my hand at mixing mediums.  In August, I gave birth to a new little SoundGirl, and I wanted to share with her one of my favorite stories:  Roverandom by J.R.R. Tolkein.  I want her to follow along with me, but also was have the story available if she was babysat by grandparents.  In my copy, the publishers thoughtfully included prints of Tolkein’s illustrations, and I used those as a guide for a fabric book and a radio play.  The mood and style permeate through the scene designs done in felt, while the narrative and characterizations are explored through sound effects, voice, and music.  Together the confluence is grander than the sum of its parts and makes me a better sound designer.