So. When Can I Expropriate the Sound Guy?

While I was working at South by Southwest, I went to go check out a performance from a friend-band downtown. The bar was the usual dive, narrow and rectangular, not much in the way of sound equipment. While the friend-band was setting up, I noticed that the engineer was, to put it mildly, drunk as a skunk. Not only was he slurring his speech and making jokes that he’s checking out porn on his laptop, but he was dropping mics right on their heads, knocking over equipment, and had a rat’s nest of cables sitting in the back corner of the stage.

The 6 Archetypes of Sound Guys

Once the performance began, the mix was just horrible; the vocals were overpoweringly loud, you could barely hear the drums, and the guitar and bass were just swallowed whole. Periodically throughout the performance, the sound guy left his post at the board to go to the bathroom and the bar, sometimes gone for whole tunes. At one point the singer’s mic cable got tangled with some of the lighting equipment, and the engineer was nowhere to be found.

I felt horrible for the talented musicians that were on stage. They didn’t deserve the terrible sound the venue stuck them with. To me, this brings up the question of when, if ever, is it okay to expropriate the sound guy? He was clearly unable to effectively do his job, and the music suffered for it, not to mention the fact that he was causing damage to the venue’s gear. It made me feel so angry for the band, and I was astonished that someone would do this kind of work while completely fershnickered; almost like an affront to professional sound engineers the world over, dive bar or no dive bar.

I was taught, and firmly believe, that one always respects the lead of a project, no matter what. If there is a problem, you quietly take the lead aside and address your concerns. But this was no studio, and this was certainly not a collaborative project. And whether I liked it or not, this guy was employed by the venue to provide sound for the band. As much as I wanted to be that knight in shining armor, it would’ve been in bad taste to just kick the current reigning sound guy out with a cup of coffee… Or would it?

For now, I think I’ll go write a Yelp review. 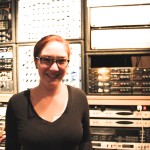 Willa Snow is a freelance studio sound engineer and producer, currently based in the San Francisco Bay Area. She loves working with artists in the studio to carve out their sound and clarifying their stories.