For the past three years, I have helped out my friends with the audio & production side of a small festival they organize called Heart Fest. Held in Gatineau, just across the river from Ottawa, Heart Fest features over 30 hardcore & punk bands from across the world. Like any festival, the days are long and the work can be hard, but I’m always glad to help – all proceeds from the weekend are donated to local charities. I came of age in the Ottawa-Gatineau hardcore scene, and I love seeing friends give back to the community.

Prior to the festival, I am responsible for setting up the PA rental with a local company. There are a few challenges involved with production, namely that the shows are generally held in community halls that don’t have the best electrical set-ups and a very small budget for audio equipment. Fortunately for us, the main organizer’s father is a licensed electrician and has helped us map out electrical circuits before the event, as well as fixed wiring (turns out running industrial coffee makers for the weekly bingo really does a number to your plugs!). As for PA equipment: I don’t get to use a million-dollar setup, but it works for the show, and that’s all that matters. Through the years, we’ve developed a good relationship with the local sound reinforcement company, and I always get a few cool toys to play with.

The 2015 edition was a bit more complex than 2014’s, as there was a double booking of the original venue… This lead to the festival being held in two different rooms, which meant setting up the PA twice. I’m used to club gigs where it’s mostly just plugged and play – there’s nothing like unloading a truck to get you in shape! 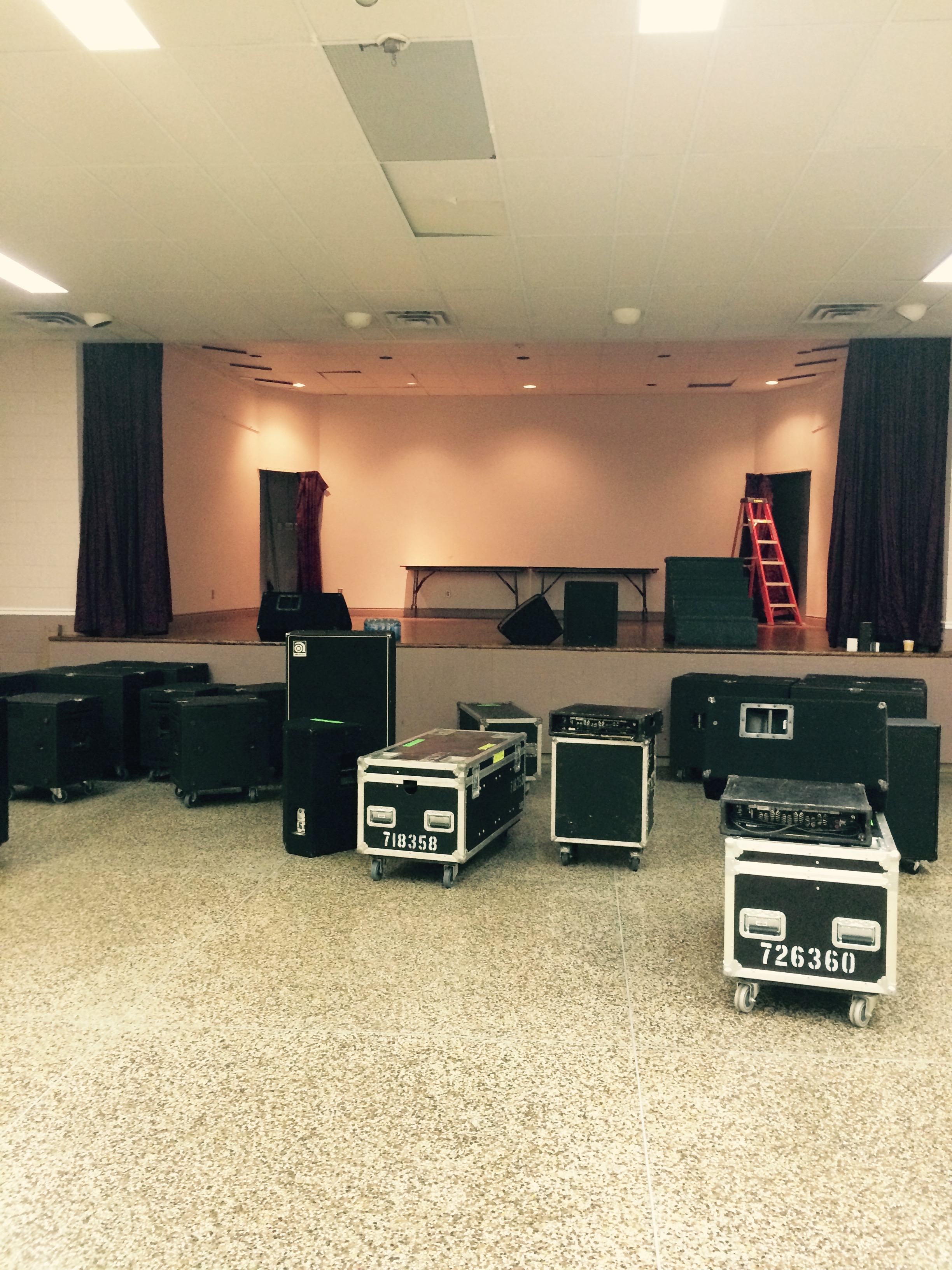 I arrived at the venue just in time to see the festival organizer driving up with the PA equipment truck. A crew of us got together to unload, and in no time, we had the rig in the room. This year’s kit was comprised of a Dynacord Kobra system (3 subs & 2 tops a side), Yorkville 15” monitors and their appropriate power amps, a Midas M32 board, and an assortment of standard rock show mics.

I had never been to this room before, and I was stressing out about finding available power. After speaking with one of the venue’s workers, who assured me that “all those wall plugs worked”, it became apparent no one knew the electrical floor plan. I had tried to advance these details, but in community centers, it can be hard to get a straight answer… My fellow tech, Alex, and I snooped around back rooms and found the electrical panel, saw how a few things were labelled, and hoped that the outlets on stage were separate from the ones running along the side wall, as they seemed to be.  We ended up plugging the PA amps on what we assumed were two separate 15 amp circuits, the monitor amps on another, and running the backline on what also seemed to also be a different circuit. I powered on the board, and my friend flicked on the power amps.  We threw some tunes on the PA, and slowly started cranking it… After dancing around to Drake for a few minutes, we made the educated guess that we weren’t going to blow a fuse, and continued setting up the stage. So far, so good!

A few bands had pulled out of the night’s show, so we ended up having more time to set up, which is always helpful. Although the Kobra speakers “lock” into place, I knew that as in previous years, it would be necessary to strap the PA for added safety. 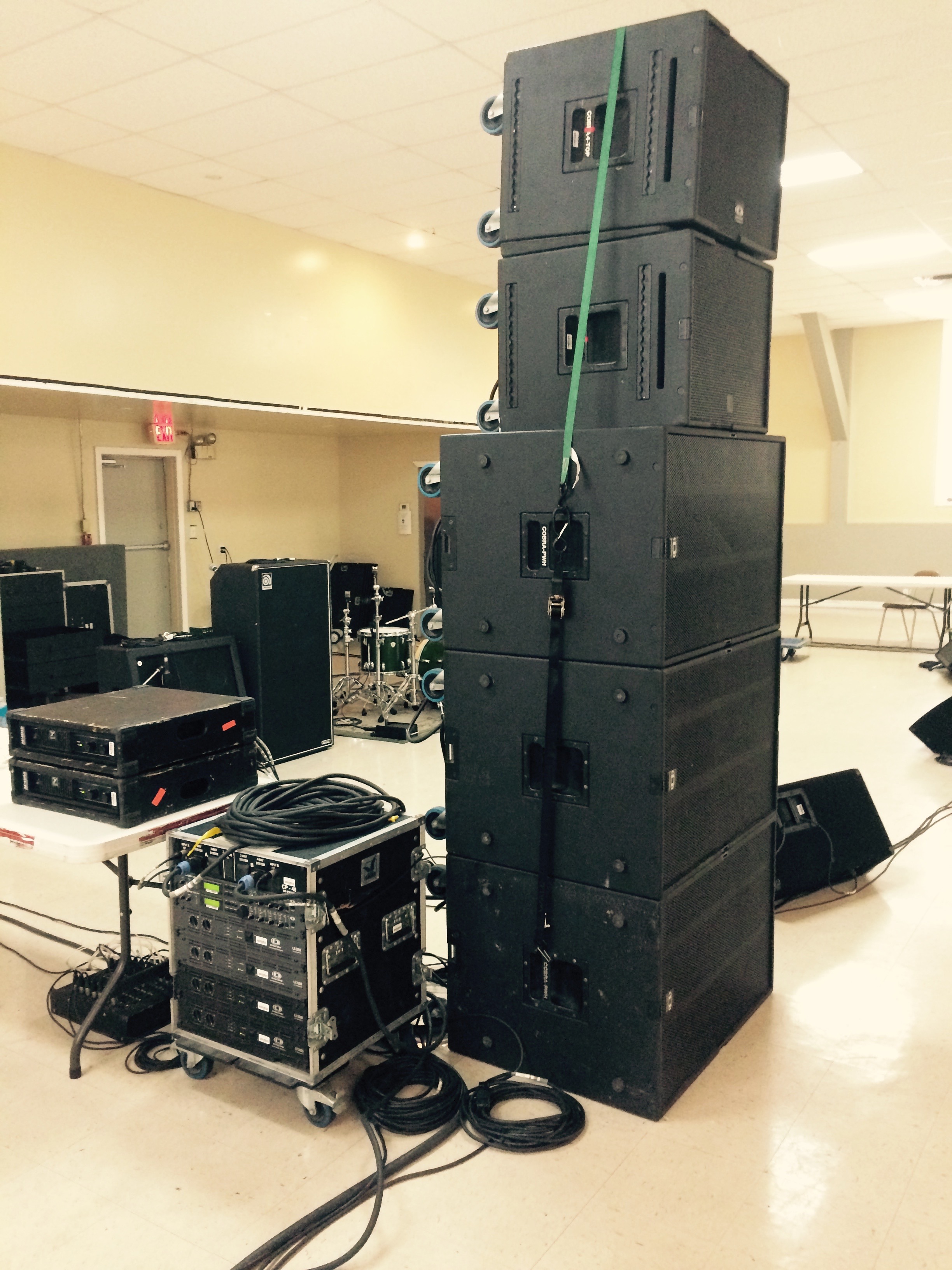 I was concerned with kids stage-diving (basically, climbing on stage and then jumping off onto the crowd) into or off the PA stacks, and knocking off a speaker. With the speakers strapped to each other, it is nearly impossible to knock an individual speaker over – the whole stack would have to topple first. We assumed that with security on stage diverting stage divers away from the PA, both the speakers and concertgoers would be safe.

After the stage was set, we sound-checked the opening band. For a community hall, the room didn’t sound half bad! As the show progressed, our mixes got more focused, and by the end of the night, it was sounding pretty heavy in there! It was an early night, and by 11 pm, we had powered down the amps and board, and after some light cleaning, were on our way home. As the show was being held in the same room the next day, we didn’t need to put much away.

As I was leaving the night before, it was brought to my attention that the PA stacks were moving around on the tile floor. This was mostly due to humidity and the floor being wet, but also from the pressure of attendees trying to crowd the front of the stage. In order for things to be safer for everyone, the organisers and I ended up moving the stacks roughly a meter further out and turning them in, so it was harder for kids to get near their sides.

The day was off to a good start – all our lines were good, and we were getting through line checks quickly. The last band before our scheduled supper break was hitting the chords of their last song when suddenly the room went both silent and black. There was a collective gasp, while I had a mini heart attack: “This is it, we’ve blown a fuse, oh ***k, what happens if we have to cancel the show before the headliner plays, ***k ***k ***k”. I asked the other tech to go to the fuse box while I went up to the amp racks and turned them off. We wanted to make sure all equipment was off before we switched a breaker back on, to prevent a surge. In the 30 seconds, it took me to get to the amp rack, I overheard a guy say he’d seen on Twitter it was a citywide power outage.  The more I thought about it, the more this was starting to make more sense to me, as we’d run the exact same set-up all night yesterday and for most of the afternoon, without encountering any problems… I asked the promoter to call the hydro company. A few minutes later, we got confirmation that it was indeed a city issue, and not our fault, as I’d initially thought.

In a strange way, the power outage had come at the best time of times: we had to take a break regardless due to the church upstairs hosting a mass. By the time mass finished, power had been restored, we’d checked all our equipment and the show was back on!

The rest of the day was not nearly as eventful, and the show finished just slightly behind schedule. Once the room had cleared out, Alex, the festival organizers and I started tearing down the PA. A little over an hour and a half later, we had the truck packed.

I got up bright and early and headed to the venue to unload the truck yet again. 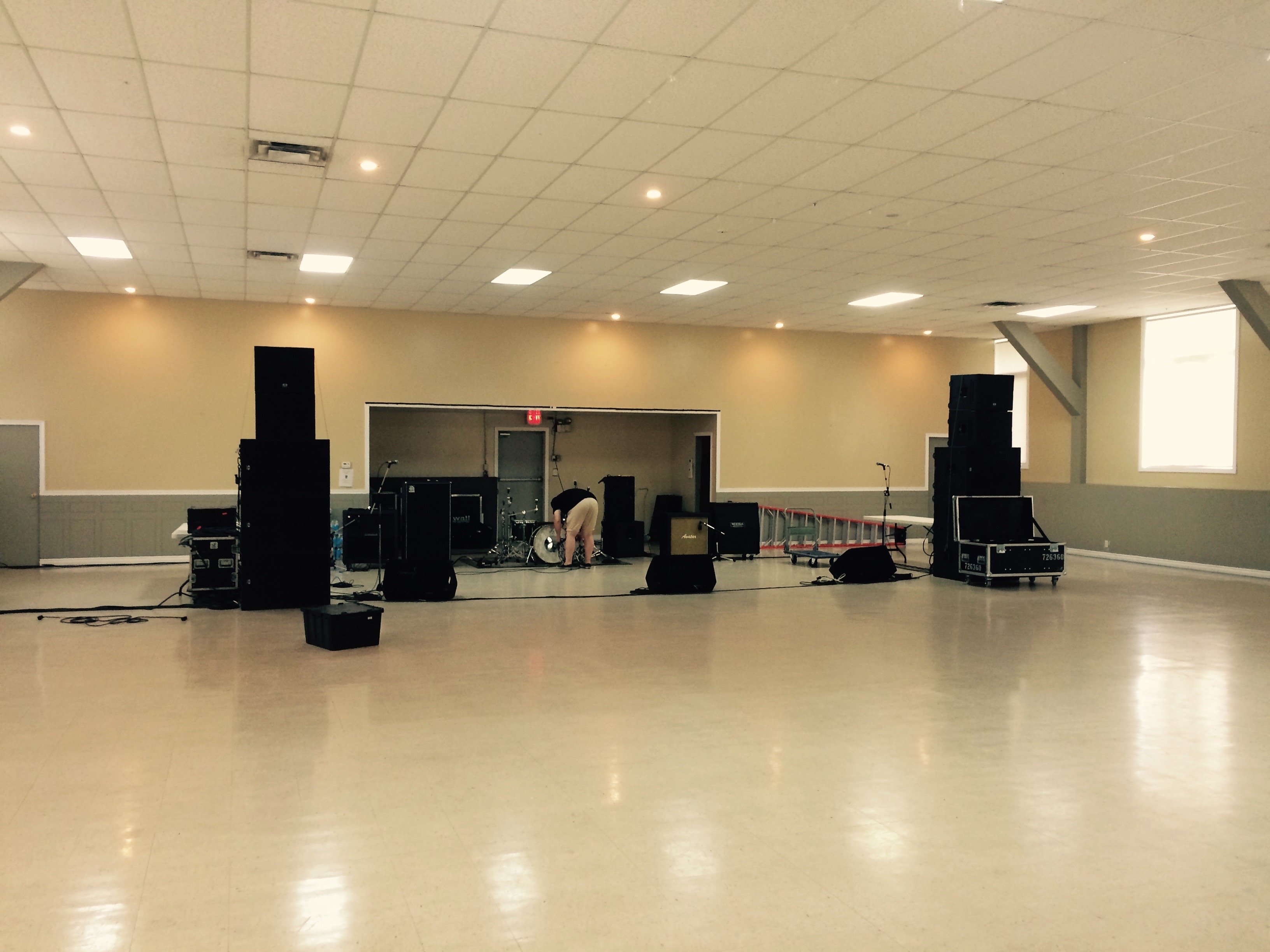 The final day of Heart Fest was held in the same venue as the 2014 edition. This was helpful, as we knew what to expect, power and space-wise. The only change was that this year, we didn’t have a stage coming in – this meant having to tape down cables and trying to make sure the venue was set up as safely as possible.

I ran PA power from the back of the room, in the kitchen, as we knew there were two separate 15 amp circuits there. As in the first days, we stacked the PA and strapped down the speakers. I couldn’t avoid having the monitor lines running across where the front of the stage would have been, so I just hoped that kids wouldn’t trip over them or somehow manage to pull the NL4’s out of the speakers. I’m used to house and small venue shows where there are no stages, and I know that most of the time, people respect the musicians’ space, but it just takes one person who doesn’t to cause chaos!

Turns out I worried for nothing: we had no problems with people tripping over or pulling out cables, and the show only ran slightly behind schedule. It was a long day (we had 13 bands play), but by 10 pm, we were all done with music. The crew and I tore down the PA for the last time, packed the truck, and headed off for a celebratory late-night meal. I’m always glad to help friends out with their events, and I’m stoked to have been part of Heart Fest 9.