Sarah Welsh – It Runs in the Family

Sarah Welsh was born into the world of sound and at age thirteen is possibly the youngest girl working in audio. Her parents own and operate Welsh Sound a regional Mid-Atlantic production company. James and Dawn Welsh have raised Sarah around music and the business, taking her on the festival circuit at three months old. Since then, Sarah has accompanied her parents on numerous gigs throughout the Eastern United States. She helps with everything from schlepping gear to working as a runner and more importantly making sure the Welsh Sound crew is fed. As Sarah puts it, she “usually does roadie work”. Like all seasoned roadies, she has stories – like the time she chatted with Yo-Yo Ma about Oscar the Grouch and Elmo, has her favorite catering, and her own road case. 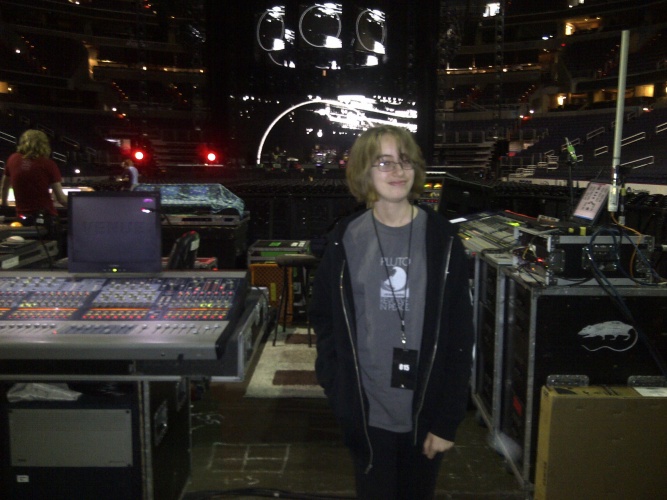 I had the pleasure of meeting Sarah a few years ago when she came to a Pearl Jam show to interview me. I found Sarah to be a smart and mature ten-year-old who had a keen interest in sound. Sarah is now thirteen and says that interest is constantly growing and that she has developed a level of respect for the industry and the challenges it presents. She likes the fact she can be part of a live musical performance and hear the immediate results. Like many roadies, Sarah has an extensive musical background, playing several instruments and holding a tune, as well. She says bass is her favorite instrument to play and loves the Black Keys, the Shins, and Flying Lotus. She draws her musical inspiration from ZUN, the creator of the Touhou Project. Sarah was recently given the opportunity to mix her first gig for a Jazz-Rock band called Tuxedo Drive. James helped Sarah set up the gain structure and dynamics and then Sarah took over the FOH mix. While Sarah was in shock that she was mixing, she received many compliments and the band was happy. She also learned an important lesson – It ain’t over until it’s over. The band decided to play a few extra songs that sent Sarah scrambling for her headphones and dealing with instrument changes. “It was trial by fire,” says Sarah.

Although Sarah has the support of friends and family, and I am sure the Welsh Sound crew, she feels that her age and gender “just screams – Hi there. I’m here to hold you back”. I do not get the impression that will much of an obstacle for her. Asked about her long-term goals Sarah says “ her true love is her artwork” and hopes to pursue a degree in graphic design. Eventually becoming a concept artist working in Anime, Magna, comics, and video games. She can always fall back on her sound experience and jokes about taking over the Welsh Empire and “ruling with an iron fist”. Digital consoles have taken over in Sarah’s lifetime and yet she considers herself “an old school analog girl” and loves her classic Shure 55 microphone. Sarah is practical though and likes the Yamaha M7 and
considers line-arrays a part-time hobby.

Sarah’s advice to young girls her age is “If you’re into this stuff, great! We need more women working with audio and music. Don’t let anyone hold you back, just keep doing what you love. That is something I’ve learned in my short time of working around live audio.”
That is Sound Advice!

We at SoundGirls.org wish Sarah the best of luck in all her future endeavors.

Amy Powelson goes where the work is and where the wind blows, working in professional audio for over 20 years. Amy most commonly works as a FOH engineer for corporate and broadcast events, and as a monitor engineer on festivals.
Read the Full Profile

“I think that if women stand behind women – both women as audience, women as listeners and viewers and women as co-workers within the broadcast field – we’d just be supportive and give each other a little encouragement, it would make all the difference.” Marion Keisker MacInnes
Read the Full Profile

As a consumer of music you may not pay attention to how many artists playing on the radio, or on your Spotify list are women.  It may not come to mind to ask yourself if a woman produced your favorite song, or if it was a woman who engineered the album of your favorite band. But,...
Read the Full Profile
We use cookies on our website to give you the most relevant experience by remembering your preferences and repeat visits. By clicking “Accept All”, you consent to the use of ALL the cookies. However, you may visit "Cookie Settings" to provide a controlled consent.
Cookie SettingsAccept All
Manage consent