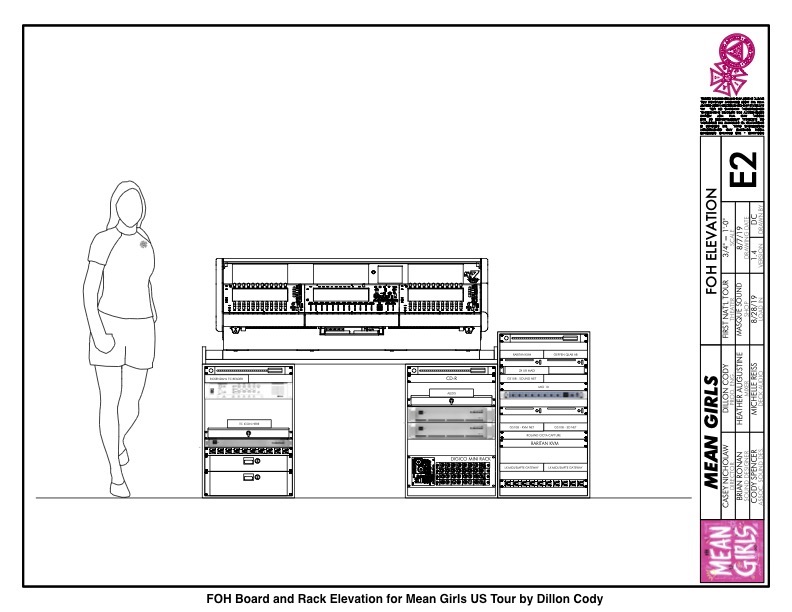 Before Mean Girls was planning to hit the road again, I got the opportunity to work on the re-start of the Cats tour as the production audio. That was a job I had never considered myself remotely capable of pre-pandemic, but as the world started to open back up, I was itching for a chance to get back into a theatre and more than ready for what I now viewed as a challenge instead of an impossibility.

I’m sure more than a few people reading this have never heard of production audio before. It’s not a job that’s billed on the front of the playbill like the designer, and they’re only with the show to get it up and running, so you’re not going to see them in the theatre when you go to watch a show. So what do they actually do? 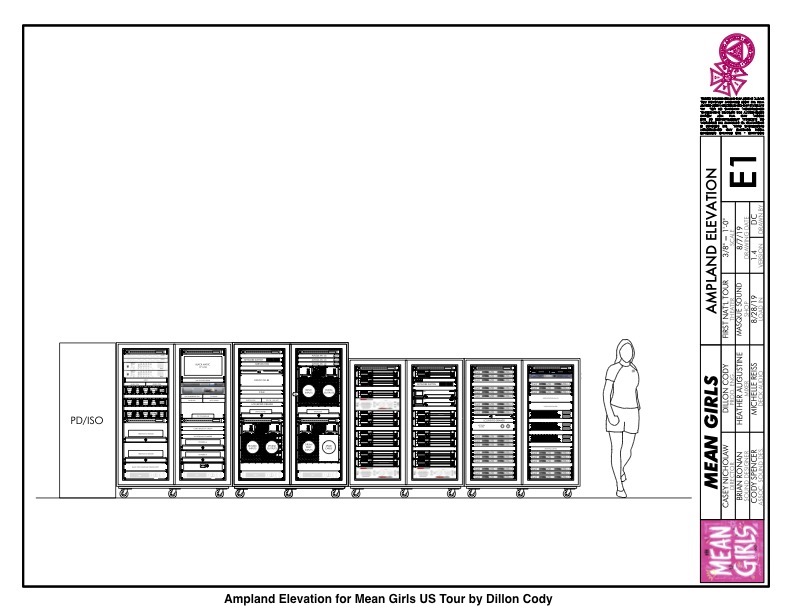 So. Very. Much. They’re responsible for the logistics of taking a show from theory to reality. Given paperwork from the designer, they interface with production, design, and the shop to get all the equipment needed and figure out how everything goes together. How will all the gear fit into racks? What cables do you need to connect everything? Do you need infrastructure for MIDI or timecode? Networked computers so you can operate amps, consoles, or programs remotely? Who in the crew will need com and/or video and how does it get to them? Which speakers will need rigging hardware and do you know where they’re going to go or should you bring multiple options?

It’s a parade of endless questions

Which requires an extremely organized person, a good communicator, and a lot of technical knowledge. My pre-COVID hesitation had always been the last part. I knew I was organized and could keep people in the loop, but I know the tech-heavy aspects of sound don’t hold my interest nearly as much as the more artistic side of things, and I’d always assumed that meant I would be a disaster in such a job.

Thankfully, with the tour re-mounting instead of being a brand new production, the system was already built and sitting in a warehouse. That removed the most complicated technical part of the job from my plate, plus I’d worked with the original designer and production team before, so I was familiar with how they built their shows. That was actually why I got the call for the job: I may never have done production before, but I knew how to tour and what I’d be working with.

With that part already taken care of, my job was mostly coordination and improving efficiency. On a new show, the crew has two or three weeks in the shop to get all the gear, rack it up, cable, and test everything. For the remount, we took the existing system back to the shop and we had two weeks to make the changes the designer and production manager had agreed on so the show could load in and out faster. (It was going to a schedule with shorter stops and more frequent moves.) I had a list of items that were getting cut (under-balcony speakers, remote com stations, etc) and substitutions that were being made (drums mics swapping out for an e-kit, the console changing over from an SD7 to an SD10), as well as evaluating anything we could tweak to make the touring crew’s life easier.

The shop crew consisted of me as the production audio, the A1, A2, and a few locals who are audio people that work on or around Broadway. I was in charge of hiring the local crew which was something completely new to me, but I was fortunate to have friends in the NYC area who were veterans of plenty of shop builds and were both available to work and willing to help me navigate a job I had never done before. Pro tip: hire people smarter than you and listen to them. A large portion of the success of the show can be directly attributed to my shop crew. They helped me work through technical questions, pointed out when I’d missed things or might have incorrect information, and offered advice when I needed help or they knew a better solution. With their help, I didn’t have to know all the technical answers and could lean on their expertise.

At the end of the two weeks, we packed everything on a truck, and the A1, A2, and I went to tech. Now I was back in familiar territory, just in a different role. Instead of loading in the show in my usual role as the A1, my job as production was to take care of setting up anything that the road crew shouldn’t have to touch on a normal load in or out: cameras that live in electrics truss, speakers that are mounted to set pieces, setting up for an orchestra rehearsal that would only happen in tech, etc. My goal was to always be one step ahead of everyone else, whether that was having tech tables set up before designers came in, making sure speakers had the correct hardware and were ready for the crew to set up, or ordering supplies to make sure we had everything we’d need.

I liked this part of the production process the best. After almost a decade on tour, I’d tried many ways to streamline shows and I knew what worked, what didn’t, and what could make a project less of a pain. So I rigged up speakers, spiked placement, color-coded cables, and did my level best to make the system as easy as possible to move.

All in all, I consider my first go at production a success. Did I do everything perfectly? Nope, definitely not. But the fact that I was willing to ask for help and advice meant that most of the problems I encountered were minor or the crew knew it was an honest mistake and were willing to give me some grace while I fixed it. Am I going to change my career trajectory now that I know I wouldn’t be an abject failure at production? Again, no. It was empowering to try something new and I truly enjoyed the work, but in the shop I still found myself wishing every once in a while that I was the one building the racks instead of answering endless emails and phone calls, printing labels, and fielding questions. In tech, I occasionally itched to push faders instead of sitting at my tech table placing yet another online order and looking over what seemed like endless lists of projects to do and fixes to make. On the other hand, I wouldn’t automatically turn down the opportunity as I had in the past. It was gratifying to see my to-do list slowly dwindle down as we went through tech and I loved the feeling of accomplishment when I knew I’d made some part of the tour just a little bit easier to load in. Since it was the A2’s first tour, I was also able to give him advice of pitfalls he should avoid and the best ways I’d found to speed up my workflow. Touring is a very odd combination of skills, and it was good to know I could pass on my accumulated knowledge to make someone else’s life easier.

This past 18 months of pandemic gave me a good opportunity to reevaluate my skills and realize that, not only was I capable of more than I thought, but I had a wonderful community around me who wanted to see me succeed and was willing to help make that happen. So, maybe, as the entertainment world comes back to life, try something new. You might find yourself pleasantly surprised!