When I went to the Acoustical Society of America’s meeting a few years ago, I did not know what to expect.  I was presenting an undergraduate research paper on signal processing and was expecting individuals with similar backgrounds.  Instead, there were presentations on marine wildlife, tinnitus, acoustic invisibility and the speech patterns of endangered languages.  One individual, I met there was Colette Feehan, a linguistic doctorate student at Indiana University.  I gravitated to her upbeat personality and affinity towards collecting awesome trivia. When she mentioned to me in passing her interest in voice acting, I thought I should follow up and pick her brain on the nuances of voice acting. 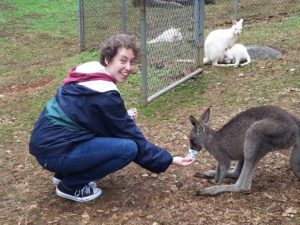 What is voice acting?

Voice acting is providing vocalizations for various kinds of animated characters and objects. This can be speech, grunts, screams, musical instruments, animal vocalizations, and a whole array of other sounds. When watching an animated TV show or movie, every sound you hear has to come from either someone’s mouth or some creative use of props. Often voice acting draws from generalizations about language that both the actor and the audience hold. In a way, some might think of voice acting as acting with a handicap. You’re not just acting with one arm tied behind your back, your acting without the help of any of your body language, facial expressions, etc. You need to convey all that information using just your voice. It’s honestly quite fascinating.

As a kid, I would always imitate sounds from baby elephants to musical instruments to voicing children younger than me. I can’t think of one specific moment that made me interested in voice acting, but I can certainly say it has always been a part of my life.

Who are your favorite voice actors?

What are your favorite voices to do?

First, I think it’s important to mention that I study the linguistics, phonetics, and acoustics of voice actors MUCH more than I actually do voices myself, though I have lent my voice to some improv, plays, friends animated projects, etc.

I’m a bit of a one trick pony when it comes to voices, though. I can do teenagers and little kids, but not much else.

Any favorite tricks or sounds?

In contrast, I can do loads of weird sounds: kazoo, trumpet, electric guitar, mourning dove, cats (meow and purr), dogs.

Does voice acting have a specific lingo, and if so what terms should directors learn for more efficient directing?

It does! I’ve actually considered starting a bit of an informal dictionary on terms while working with voice actors on the linguistics of voice acting. Most of the lingo that I’ve really paid attention to are linguistics concepts like what linguists call “dark L” some voice actors call it “Lazy L”. “Breathy Voice” in linguistics is called “Smokey Voice” by voice actors. The one that is really interesting is what Rebecca Starr (2015) calls “Sweet Voice” this is an EXTREMELY specialized kind of breathy voice found in Anime that indexes a very specific character archetype.

I have heard that you are doing some research on voice actors, could you tell me a little about that? 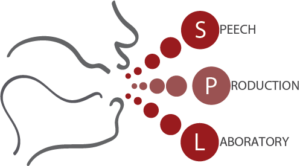 In the Speech Production Lab at Indiana University, I am using a special 3D/4D ultrasound set up to look at the articulatory phonetics of adult voice actors who produce child voices for TV and film. A lot of people either don’t know or don’t think about how when we listen to child characters, particularly in animated TV, those voices are often being produced by an adult. The big question I am asking with my dissertation is–What are adults doing with their vocal tract anatomy in order to sound like a child?

So if anyone doesn’t know a lot about how ultrasound works, here is a quick and dirty description:

Ultrasound works by emitting high-frequency noise and timing how long it takes for those sound waves to bounce back. We place an ultrasound probe (like what you use to see a baby) under the participant’s chin and record ultrasound data of their speech in real time. What we can see using ultrasound is an outline of the surface of the tongue. The sound waves travel through the tissues of the face and tongue, which is a fairly dense medium to travel through. When the waves come into contact with the air along the surface of the tongue, which is a much lower density medium to travel through, they show up on the ultrasound as a bright line which we can trace to then create static images and dynamic video of the tongue movement. So what does 3D/4D mean? We have a fancy ultrasound probe that records in three planes: sagittal, coronal, and transverse. So we take all these static, 2D images, trace them, then compile them into one 3D representation of the tongue. Then we can sync this with a recording of the speech creating our 4th D, time. So we can create videos of what a 3D representation of the tongue is doing while speaking and we can hear what it was doing at that moment. It is really cool.

So things I am looking for are: What is the hyoid bone doing (the bone in your neck near where your neck meets your head)? Does the place where the tongue touches the roof of the mouth for different consonants change? Are general tongue shapes and movements different across the two conditions? How do the acoustics change (how does the sound change)? Are those changes in acoustics changes that we would predict based on what the anatomy is doing?

How balanced is diversity in the voice actor industry?

Voice acting has a bit of a double-edged sword in that you don’t have to *look* the part to get the role. It’s just your voice! So someone who might not be your size -6, blonde haired, wide-eyed beauty can still get the opportunity to play that character. Where this becomes a negative, however, is with actors of color. Because you don’t have to look the part, I think a lot of white actors get roles that otherwise would have HAD to go to an actor of color. I do know the field has recently been trying to address this issue, but we can certainly do better.

So what is your opinion on vocal fry

I love creaky voice (I’m going to use this term instead). It can mean so many different things, socially. Is the speaker a man or a woman? Are they in their 20s? Are they using uptalk? Are they just running out of air at the end of their utterance?

Why is there the focus on women’s vocal fry?

I can’t say I’ve studied why specifically women’s creaky voice has blown up so much recently. Creak is really common in deeper voices, so men do it all the time, but we don’t seem to notice. Maybe when women started doing it more people unconsciously associated it with being manly and negatively reacted to it. Or maybe it’s that creak is often paired with uptalk, so it became stigmatized really quickly.

How are men’s and women’s voices different?

Again, I’m not sure I’m the most qualified to talk about this, but I can say that men’s and women’s voices differ in many different categories. First, there is simply anatomy; men have an Adam’s apple which increases the area for resonance in the larynx. They also tend to be bigger, have bigger lungs, etc., making their voices different. Then there are a lot of social ways in which men’s and women’s voices differ. Taking creak for example again, when women use creak it is associated with very different things than when a man uses creak. So the same “thing” performed by a man compared to a woman doing the same thing can be interpreted quite differently. Humans are fascinating.

Nicole Kirch is a North Carolina based recording engineer and musician.  In her short career, she has worked on location sound, post-production, stage crew, and electronics.  Her love of sound stretches to almost every niche.  Nicole holds a BA in Sound Design from Michigan Tech (the first female to graduate from the program) and a BS in Electrical Engineering Tech from Austin Peay State University. She believes in female empowerment and independent music.