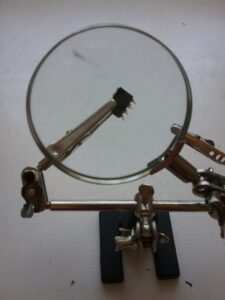 Inside many of the electronics used in the Audio Industry is an integrated circuit (IC) called a 555 timer.  The extent of its usefulness goes beyond what I would feasibly be able to list in one article.  Even Wikipedia mentions that it is one of the most common IC’s available.  Under the hood, a 555 timer consists of a couple comparators, a latch circuit (called a flip-flop), and a discharge transistor all bundled into an eight-pin IC.  By itself, it acts as a latch circuit for storing state information (or short term memory for use inside a circuit).  When connected in the astable circuit configuration it becomes a square wave generator that can be voltage controlled.  In a resistor-capacitor (RC) circuit it becomes a one-shot pulse generator, and as an added trick the 555 timer can be a Schmitt Trigger or a simple analog to digital converter (ADC).

How did this chameleon workhorse come to be?  In 1919 the first astable multivibrator oscillator (square wave generator to its friends) was invented.  Other oscillators at the time generated sine waves (or simple waves), while this circuit was rich in harmonics and therefore produced a square wave.  Other uses for the multivibrator were discovered throughout the 1940s.  The IC known as the 555 timer came to be in 1971 by a Swiss engineer named Hans R. Camenzind.  It instantly became a bestseller. Sorry to disappoint the conspiracy theorists out there, but the name was an afterthought. 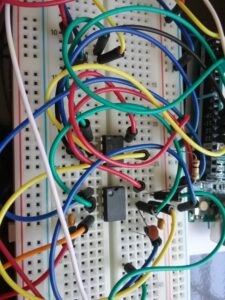 Stepping back from circuit lingo, why is the 555 timer worthy of adoration?  Where does it exist?  Voltage-controlled oscillators (for synthesizers), dithering (noise generation for sample rate conversion), clock signals (for syncing outboard equipment), analog to digital converters, and not to mention all the various blinking lights that adorn audio gear.  So what does the 555 timer do for fun?  Like many of us, the 555 timer indulges in video games and prefers consoles for their controllers.  The Atari Punk Console, a 1980’s RadioShack DIY synthesizer, happens when the 555 timer invites a friend for a late-night jam session.  In fact, you might have the parts to make one laying around right now (Wikipedia has the schematic).

Honestly, the 555 timer is the popular kid who was never too cool to hang out with you, the team member who always has your back.  From sophisticated audio equipment to garage-built synths, blinking lights to ADC’s, the world is the 555’s oyster.  Three cheers to the little chip that could.  Let’s rock out together.