Occupying Both Sides of the Glass 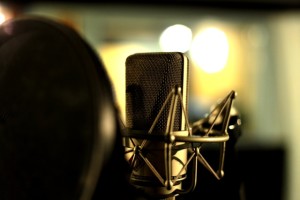 When I’m working with other artists in the studio, my main concern is the emotion. I start by recording as many instruments as possible live, preferably with minimal metronome use, to keep everything sounding organic. I keep the emotion of the song at the front of my mind, with technique taking the side burner (not completely top priority, but still important). I’m in the business of tugging heartstrings, of helping to create impactful art that is also something that the artist can feel proud of. However, when it comes to developing my own music, it’s a totally different story.

I had an interesting realization recently: In all my time being involved in the music world, never once have I entered the recording studio as simply an artist. Every time I entered that space to record my own music, I was either the engineer, the producer, the intern, assistant, mixer, writer, or a combination of all of them, in addition to being the one recorded. As such, when I am developing my own music in the studio, I am very much in a production state of mind.

I have absolutely no idea what it’s like to be just the artist in the hands of a producer (though I’d imagine that it’s something like going to the auto mechanic when you know next to nothing about cars). Becoming an educated listener and engineer has definitely impacted the way I look at my own music when developing my songs in a recording session. For one thing, not only am I analyzing the way everything sounds, but I end up becoming so nitpicky that it’s darn difficult for me to ever call a mix, “finished” (though I’m sure that’s true for most sound engineers, no matter who you’re recording). Instead of viewing my songs as stories, I start using them as a sonic playground, blank canvasses to experiment with different mics and instrumentations.

It’s always a significant challenge to take a step back and to try to “hear the full picture,” as it were. On the one hand, it’s a great way for me to unleash the experimental side of myself without worrying about paying the engineer’s hourly rate. On the other, however, is a risk of never finishing anything. But it’s always an excellent exercise in letting things go as they are completed, and in keeping the overall goal in mind. Willa Snow: Willa is a freelance studio sound engineer and producer, currently based in the San Francisco Bay Area in California. She loves working with artists in the studio to carve out their sound and clarifying their stories. She will be blogging about her past and current experiences in the studio, and sharing her journey as she pursues her career goals.