When I was a kid, I used to sing in the tubes on the playground with my friend Melly. We liked the way the plastic tunnel helped us hear our own voices. We’d lay head to head and play with our voices, intervals, vowels, lyrics, improvising harmonies for what seemed like hours. 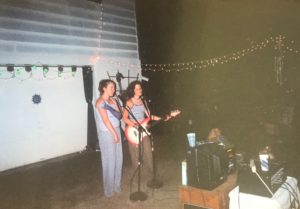 We both played the guitar, our little 11-year-old hands barely reaching both E strings for our first position G chords. We wrote songs together in Melly’s bedroom, which she shared with her little sister and was covered in Spice Girls stickers. Her dad was a musician, a drummer and songwriter, and we sometimes listened to his recordings for inspiration. Melly had music in her blood.

We stood next to each other in school choir. We were both in the alto section, but Melly’s range extended well into soprano. Together we learned Mozart’s “Lacrimosa” and Rogers and Hammerstein’s “Edelweiss”. After school we’d take turns guessing the soprano part, so we could sing together in harmony.

In middle school we started a band with three of our other friends called Magenta. We were essentially trying to be the new Spice Girls. Our “thing” was that we all wore magenta lipstick (even though none of us had ever actually worn makeup yet). Melly wrote a song for us called “The Stars Are White” which we rehearsed a few times before our schedules conflicted too much for us to keep going…I still sing “The Stars Are White” to myself sometimes. 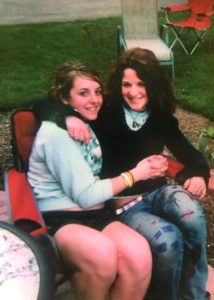 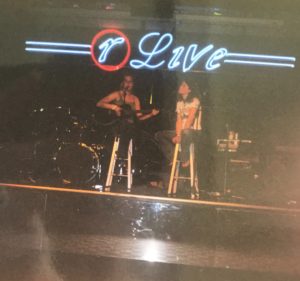 In college we took Electronic Music Production together and learned MIDI and audio signal flow. We learned C Sounds and how create sounds using computer programming language. We learned Melodyne and the power of auto-tuning software. We learned how amazing it was to have a studio software at our fingertips—we could harmonize with our own voices now, and there was no limit to how many we could have at once! We could make beats with our mouths and a microphone. We could play any sound we wanted on a MIDI keyboard. Melly always created with a sense of ease and excitement that was electric to be around. 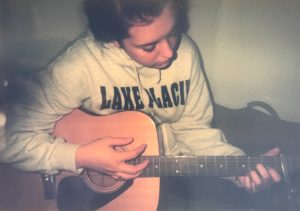 Melly transferred schools for the last two years of undergrad. The year we graduated, she got a job in Massachusetts and I found one in New York City. I played gigs on the side and took more music production classes. She got her masters degree in social work. I moved to Los Angeles. She got engaged. The power went out in a thunderstorm at her August wedding and I sang her (and her whole wedding party) songs by candlelight underneath the gazebo.

She adopted a baby boy and for his first birthday she and her family came to visit me in Los Angeles.

I picked them up from the airport and sang to the baby in the car. We arrived at my house after trekking through LA traffic, and it was time for his nap. We put his travel crib in my bedroom and closed the blinds. Everyone besides Melly and I were asleep, exhausted from a day of traveling. We crept upstairs to my home studio. “Show me what you’re working on!!” she said. I opened Ableton Live, which Melly had not used before. I explained the basic design of the software to her and we started a beat. Five minutes later she was recording vocals and harmony parts and we were discussing lyrics. Her teenage sister Lillian woke up from her nap and joined us in the studio to watch. She had never seen Melly The Musician before—she knew her as a sister, as a bride, as a mom. “This is incredible,” she said. “I didn’t know you could do this!” 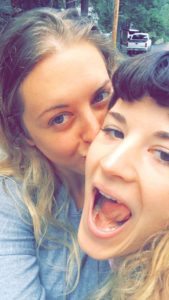 Melly was totally comfortable using Ableton. She played a bass part on my Push controller and quantized it. “This is SO much better than Digital Performer…” she said, referring to our pseudo-antiquated Electronic Production class in college. “Wow. I love making music.”

We kept playing for what seemed like hours, like we had always done. Except this time we were in my studio, and her sister was watching us, and her baby was asleep in the next room. And yet it was just as it had always been. We were on the playground again, in the tube again, head to head, listening to our voices and making music together.