Learning on a Day to Day Basis 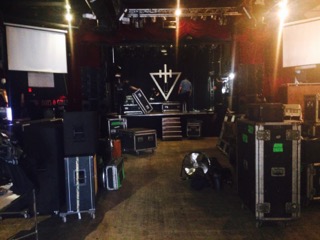 It’s been close to five months since I’ve moved to Toronto to work as a monitor tech. From at least partially conquering my fear of digital boards to working on my people skills, here are some of the more important lessons I’ve learned.

Ringing out monitors is a daily job

Running monitors from Front of House meant that I often used the same graphs on the graphic EQs.  I defaulted to these because they made most vocals stand out, and usually prevented feedback. Being anywhere from 50 to 100 feet away from the stage meant that I couldn’t always listen to my monitor mixes, and was more concerned with preventing feedback then ensuring all instruments were sounding good and distinct. Dealing with boards that had pre-EQ auxiliary sends also meant I didn’t have much control over how an instrument or voice sounded if I did need to make changes.

Now that I am on a dedicated monitor board, and either have access to a listen wedge or am physically close to the artists, I’m able to pay more attention to what my mixes sound like. This has shown me that sometimes, you don’t need to take out as much of that offensive frequency as you initially thought! Being able to EQ instruments through my post EQ auxiliary sends has also allowed me to improve my mixes.

I approach monitor mixing like I do with FOH: it’s often necessary to remove or boost certain frequencies in an instrument in order to make it more noticeable amongst others. For example, taking a few dBs away in 2- 4K range on backing tracks allows a singer’s voice to sit more noticeably on top of the mix  (a useful tip for hip-hop or electronic shows, taught to me by my FOH engineer).

Asking for help is better than assuming help is coming

Working in a larger venue means having at least two other techs working beside me (typically, a FOH tech & lighting tech), as well as touring techs if it’s a bigger show. In Ottawa, I was usually the only tech on call and was used to running a show alone, and therefore making all the decisions. Working alongside others has meant I have had to remember to check in with everyone, in order to make sure the stage is set to their liking.

I’ve also come to realize I am not always the best at delegating; I tend to take on too much work and forgot to share tasks with others. I was reminded of this during one of my very first work gigs here in Toronto. As I was struggling with re-setting the patch and stage during a quick changeover, I noticed the tech working with me wasn’t helping. I got frustrated and let them know I wanted help. We ended up arguing, and I realized I was in the wrong: I should have made it clear before the show started when I wanted help on stage, and with what, instead of assuming others would just come up and help. I’ve also had to learn that sometimes it’s unreasonable to expect the other techs on call will have time to help me. For example, if they have to set up a new file at FOH for a touring tech, and it takes me five more minutes to do a change-over it’s not the end of the world. The show will always go on, even if it’s a bit later than planned!

I think most musicians would agree that it’s better to have a good sounding show for your audience than a perfect monitor mix, so when I ran monitors from FOH, I typically spent more time on trying to get a good balance in the room before working out kinks in the monitors (as long as nothing was feeding back!).

Now that I’m exclusively doing monitors, I have more time to deal with musicians’ requests, which has proven to be a mixed blessing. Most artists I’ve had the chance to work with have been nothing but gracious and very polite with me as we go through monitor requests, but some nights it’s felt like I just can’t win.

In the early winter, I worked a local show with very demanding bands; it seems like no matter what I did they weren’t happy. Vocals were just about feeding back in all the wedges, but still, this wasn’t enough for the performers. After the last act performed, the lead singer approached me and said: “I hear it sounded great out there”, as he pointed to the room, before continuing with the dreaded “it’s too bad it didn’t sound good on stage”. When I started working as a tech, I would have argued, but four years in this industry has taught me that sometimes, it’s better to just roll with the punches. I shrugged and told him that was too bad, but that I hoped his audience had still enjoyed the show. Negative feedback keeps me on my toes and makes me look for ways to solve problems, in this case, could I have gotten a bit more volume of those wedges, and how? It’s important to learn from interactions and improve your skills, but I’ve also come to realize there’s no point in beating yourself down over one bad gig. For every bad night I have, there are five great shows where the artists are happy with my mixes.

I’m curious, what are some tips you’ve picked up from doing monitor gigs? I’m always looking for ways to improve my skills, and I know many of you are talented monitor engineers! 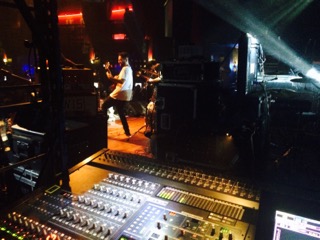 Anyhow, summer is fast approaching, and things are kicking into high gear here. Canadian Music Week just ended, and North by North East is coming up soon, as well as a bunch of other music festivals, big and small. Toronto is even hosting the PANAM games this year, and I’m hoping to make my way on some setup crews for their events. All in all, I can’t complain: I have a lot to look forward to on the work front, as I’ll be heading out on my first European tour in a few short weeks, as FOH for KENmode. More to come on that soon!
Copyright © 2015 SoundGirls.Org