I recently worked a Soul Survivor Momentum conference, as a volunteer. I thought it would just involve manning a microphone for seminars… button pressing work. Boring, but I really wanted to go the event and when you volunteer you get to go for free plus meals (win!). So I decided to do it.

It turned out I was wrong. This week long event turned out to be one of the best learning experiences of the summer. I was assigned to work in a venue called Cafe Uno. My responsibilities were manning the microphone for seminars (as I suspected) but then every evening I got to mix a great function band. The venue had two to three hundred people attending each evening, with capacity reaching 1,500 one evening. It turned into a one in – one out policy and at a Christian festival it is relatively unheard of.

Here are some of the things I came away with.

I came away with experience on how to effectively direct stage hands. This may sound strange, but I am so used to either doing it on my own or being the stagehand I did not know if I would be able to effectively direct them. The advice I can pass along to everyone going through this phase in their career (as we all hopefully will) Make sure you make a connection with your stage hand. Do not just start ordering them around. They are a people to and you were once in that position. Find out their skill set. What are they good at? What part of sound do they like doing? What do they want to learn? By finding out these things you will now understand how best to utilize them. This will help keep them passionate and excited throughout the week and what you can teach them throughout the week.

I also go to load an Artic Lorry, (for those residing in the United States articulated lorry- a truck consisting of a tractor and trailer together or a semi…) Everyone has to do it sometime. I don’t have any advice, I just thought it was pretty damn cool!

I had the same function band all week who also stayed on site and were easily accessible. I made a point of spending time and hanging out with them in the ‘teams lounge’. I found having a connection with the band outside of being their sound engineer allowed us to work together better in the evening. I found the difference between day one and day five were polar opposites. It definitely pays to hang with the band!

All in all I had a great time. I went on my own and left having made some great new friends, good contacts and a new appreciation for the guys I work with.

Here is a picture of the biggest evening. We had to bring in extra stewards to man the stage due to some crazy crowd surfing the previous evening. In addition, the venue layout had to be shifted around because the original purpose of the venue was a chilled cafe with a function band playing background music. As you can see it naturally became more like a gig/party vibe. 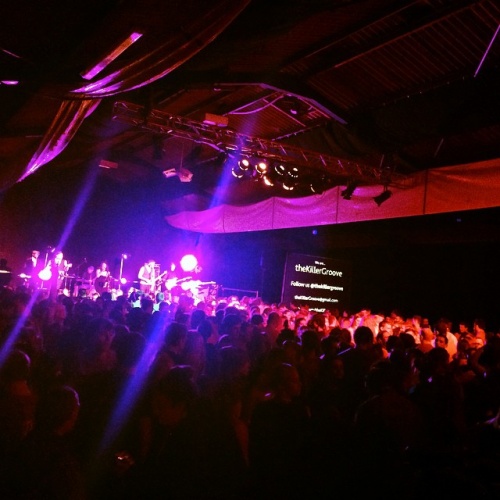 Phil Dudderidge: On the Road with Led Zeppelin – the First Time Around.
Interview with Doug Sax of The Mastering Lab