Intro to – Sound Design for Theatre

Why Silence the Tony Award for Sound Design?

Sign a Petition to Reinstate the Tony Award Categories

The shows I design for are usually scripted drama rather than musical theatre, (which is a whole sound discipline in itself).

You can roughly divide sound for theatre into three main areas:

Sound Design- Creating the Soundtrack to the Dramatic work:

This covers music, (which I often write) sound effects (either sourced from libraries or recorded myself) and atmospheres (again, either out-sourced or recorded myself), and any sound generating props. One of my favorite sound generating props was a newborn baby that was fitted with a small speaker and wireless kit, so it screamed as per its scripted cues, while being carried around the set by its mother. (By the way it was a doll.. not a real baby!)

Often it’s a matter of working with what is installed in a theatre, and supplementing and re-rigging to suit the space and the stage formation… and the budget.

Other times, I’m going into a bare space. The sound system design can also include any onstage reinforcement of both voice and musical instruments, onstage monitoring, additional speakers placed in the set or other areas, as part of the design, and off stage monitoring for stage management.

Earlier this year I did the system and playback design for a play that had a 7.1 system: the stage was shaped like a donut, and the audience sat in the middle on swivel chairs. The sound system was six speakers surrounding the circular stage, overhead speakers and subs.

Small shows may have one technician, who is running both sound and lights, and more complex shows will have a dedicated sound operator.

I program the playback system (Q-Lab or SCS ), configure computers and soundcards as required and do any digital console programming. I also create backups, the archive copy, write the sound rider, the cue list and a script with the cues marked in.

Sometimes I just come into to do sound system design and program for other designers, and on other occasions will just write music or source sound effects and atmospheres. 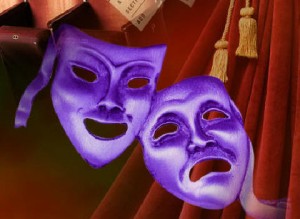 Sound design for theatre has obvious parallels to sound design for film and television, but there are some key differences. One of these differences is simply that the actors are right in front of the audience – moving and breathing, creating their own personal soundscapes and doing their own Foley. One of my pet peeves is design that constantly tramples over the delicate sounds of humans being human and interacting within the dramatic space.

Another key difference is the theatre viewer’s ability to suspend belief. In film and TV, (I’m generalizing here), it’s as if everything is colored in and there is nothing left for the viewer to imagine, and nothing for them to buy into. I feel theatre designers sometimes underestimate the theatre audience’s ability and willingness to suspend belief, and consequently over-inform them with too many sound effects, atmospheres, clutter of props and set pieces and, increasingly, AV elements such as projections and live cameras.

Related to this, is the ability to place sound into the same physical planes and spaces as light. A simple example of this from a play I designed, was a radiogram prop which, as well as playing back its music cues, had a light installed that gently glowed in sympathy to the music.

In the next article, I’ll discuss how I go about creating a sound design – how I read and interpret a script, and the things I consider when coming up with the initial design concepts for a show.