Several years ago I was on tour with an American band in Europe. A few weeks before we wrapped up the European leg, the tour was extended to include three weeks in SE Asia and India. This would be my first trip to India and one of the most difficult of my touring career.

After adding the Indian shows, the first problem was figuring out the best way to go about getting our work VISAs, which were required for everyone in the travelling party. Time and logistics would not permit it to be done during the European tour. It was decided that we would have to do it when we got back to the U.S. for a five day break between Europe and India. Since most of the band and crew were west coast based, management had a liaison take care of obtaining their VISAs. However, two of the band members had solo gigs booked in Italy immediately following our European run and would not be returning to the U.S., instead meeting us in India. They had to Fed Ex their passports home after getting to Italy and have a courier fly with the passports back to Italy after the proper VISAs were obtained so they could then travel to India. 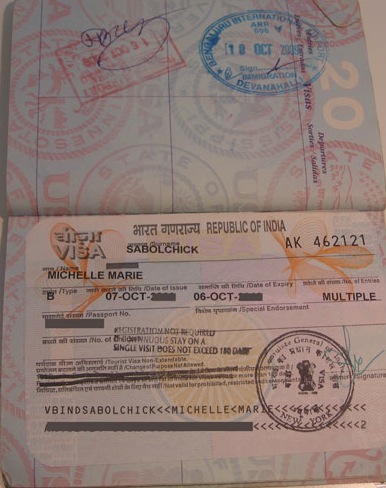 Because I live on the east coast, our VISA liaison made arrangements for me to obtain a ‘same day’ VISA at the Indian consulate in New York City, which at a 3 hour drive, was the closest and only option. Since I would be arriving home from Europe on a Friday evening and leaving for India on the following Thursday, the weekend made it impossible for me to have enough time to send my passport off and receive it back before I would have to leave.

Tuesday
I make the 3 hour trip into NYC for my appointment at the consulate. I’ve got all my paperwork and arrive a good 40 minutes before my 11 am appointment only to have to stand in line, as there seems to be no organization and it’s first come first served. When I finally reach the desk at 11:35 and handover my passport and paperwork, I am told that they stop issuing ‘same day’ VISAs at 11:30 and I can pick up my passport tomorrow. Uh, I don’t think so. I explain that I don’t live in the city, I live 3 hours away and cannot make another trip tomorrow. The only response I get is that they can FedEx it overnight to me at my expense. I’m told it will go out Wednesday and I will have it Thursday. This should have been my first sign as to how this tour was going to go. I have no choice, I can’t spend the night in the city, nor do I have time to spend the 6 hours+ that it would take me to drive here and back again tomorrow, the day before I have to leave. I pay for the FedEx and inform the TM and management about my predicament. Nothing I can do now but wait.

Thursday morning
FedEx usually delivers between 10am and 11am at my house, a fact which I am counting on since I’ve got to leave by 11:15 to make my flight. Luckily it shows up promptly and I’m out the door.
Next problem: I’m checking in at my little, local airport and the airline agent won’t check my bags all the way through to my final destination, nor will he print the boarding passes for my connecting flight because the travel agent did not issue the tickets correctly. (Same travel agent who originally booked my departure from a city six hours away from my home airport.) All of this means I have to fly from here to Newark, collect my luggage in Newark, go to the ticket counter, check in, and go through security all over again. Frustrated, I finally get to my departure gate and respond to a slew of emails from our PM who has been struggling to sort out production for our first gig which is in two days. Ugh… head down, chin up, and onward we go.

India Day 1
I have never been as exhausted as I am right now. I’ve been awake for more than 36 hours on a hellish flight with everyone packed in like sardines and the person sitting next to me constantly encroaching on what little space I did have.
After we spend an hour driving from the airport to the hotel, we are all crushed to find out that the itinerary was wrong. We thought we had a day off before the first show, but we have in fact arrived in India at midnight on the eve of the first show. When we get to the hotel it’s 2:30 am and the crew has lobby call in a few hours. So much for catching up on my sleep after not having any for the last two days.

Day 2, First show day, Bangalore
We find out this morning that after tonight’s show, we go back to the hotel and have a 4 am departure for our flight to Shillong. I guess that sleep will have to wait another day. Today’s gig is in a big park called the ‘Palace grounds’, it’s a big stage, great PA but no monitor console. “It is on it’s way” we’re told, “ten minutes”…. We hear that for the next three hours. The stage is a scaff stage in a Polo field. There are green carpets laid down over the field and a trench for the FOH snake dug right down the center from the stage to FOH. I’ve got a Nexxo PA, and I barely need to touch the house EQ as the system sounds great right from the start. I love outdoor gigs with no roof. Hours go by as we wait for the monitor console to arrive and when it finally shows up, we rush through line check and sound check right up until doors, trying desperately to get everything working. Bad cables, bad snake channels, power issues, somehow it all comes together in time. The show goes off miraculously without a hitch and it’s a great show despite everyone being utterly exhausted. I finally get back to the hotel around 11 pm and go right to sleep to wake up in 4 hours for THE TRAVEL DAY FROM HELL. 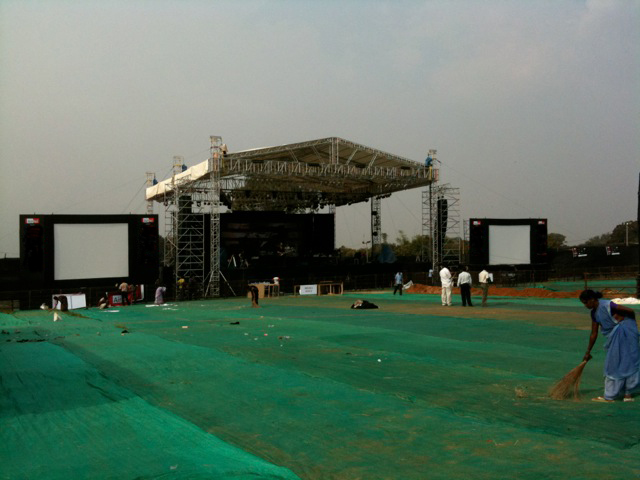 Day 3, Travel day to Shillong
We leave the hotel at 4 am, drive 40 minutes to the airport and board the first of what we find out will be three flights. We’re all in first class (thank God for small favors). It’s 2 1/2 hours to Delhi and we are late arriving. To start with, we had only an hour layover and that quickly evaporates due to the delay and the fact that somehow we ended up in baggage claim upon arrival. There is an agent waiting for us who shuffles us off to the connecting terminal where we have to re-check in and go through security all over again. We just make it to the plane and of course it’s jammed. We’re all seated together in several rows midway back. The flight is 1 1/2 hours and just before landing we find out we must stay on board, we are not at our final destination, it’s just a fuel stop. Not only are we not allowed to deplane, we are supposed to stay seated in our seats, while they service the plane. No using the lavatory or stretching your legs, just stay squashed in that tiny little uncomfortable seat. Finally after another 45-minute flight we arrive somewhere. I have no idea where we are, but it’s the closest airport to Shillong and it’s not over yet. We have a 4 hour van ride from the airport to our hotel. We pile into four tiny, mini vans with military police in front and back to escort us. 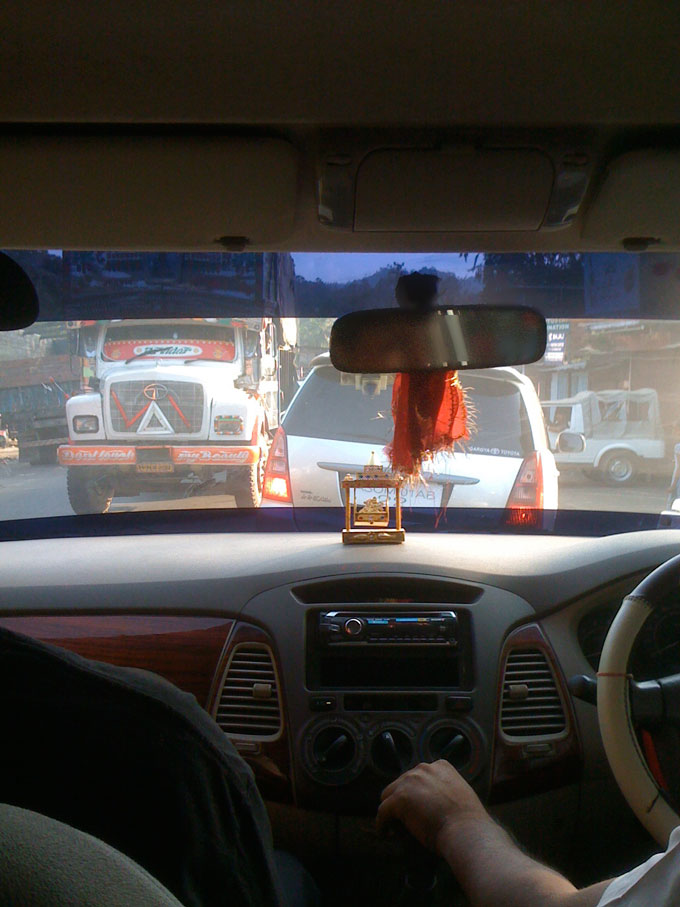 The long and winding road
Driving here is insane! The roads are well, really not roads. It’s more like the remainder of the asphalt that was laid down 20 years ago, mostly dirt and barely two lanes. There are buses, trucks, cars, rickshaws, cycles, carts, etc.. and they all just drive anywhere! They completely ignore the whole concept of lanes, just passing each other dodging oncoming traffic and the people and animals that wander out into the road wherever they please. The road to Shillong just goes up and up and up and winds around and around, it’s like being on a roller coaster but with another car coming at you on the same track.

We’re winding and weaving up the side of a mountain with no guard rails and a pretty steep drop off the side. “Drive off the road now because the suspense is killing me” is pretty much all that’s going through my mind, along with ‘oh shit, oh shit, oh shit, this is crazy, this is f*n insane, oh shit, we’re going to die!!!!’ There are buses loaded with people flying down these mountains weaving in and out of traffic. (I find out later that buss drivers here are paid to get to their destinations as fast as possible, an interesting fact when you consider the number of deadly bus accidents.) Drivers are taking their lives in their hands as they clip around trucks on the inside of blind corners, it’s absolutely crazy. I’m in the car with our PM and one of the band members and we can’t bare to watch but are terrified to close our eyes, so we sit facing each other across the seat and start talking, about anything, anything at all, to keep our minds off what is going on outside the vehicle.

When we finally arrive at the Rikynjai Resort, after leaving our previous hotel at 4 am for a 40 minute drive to the airport, 3 flights, and a 4 hour, harrowing van ride, it’s just before dusk. The place is beautiful. It’s some sort of retreat out in the middle of nowhere built next to a huge man made lake. I check into my room, overcome with exhaustion, I don’t know if I want to cry or scream but the view from my balcony is one of peaceful serenity and exactly what I need right now. The rooms are all overlooking a gorgeous lake surrounded by mountains. 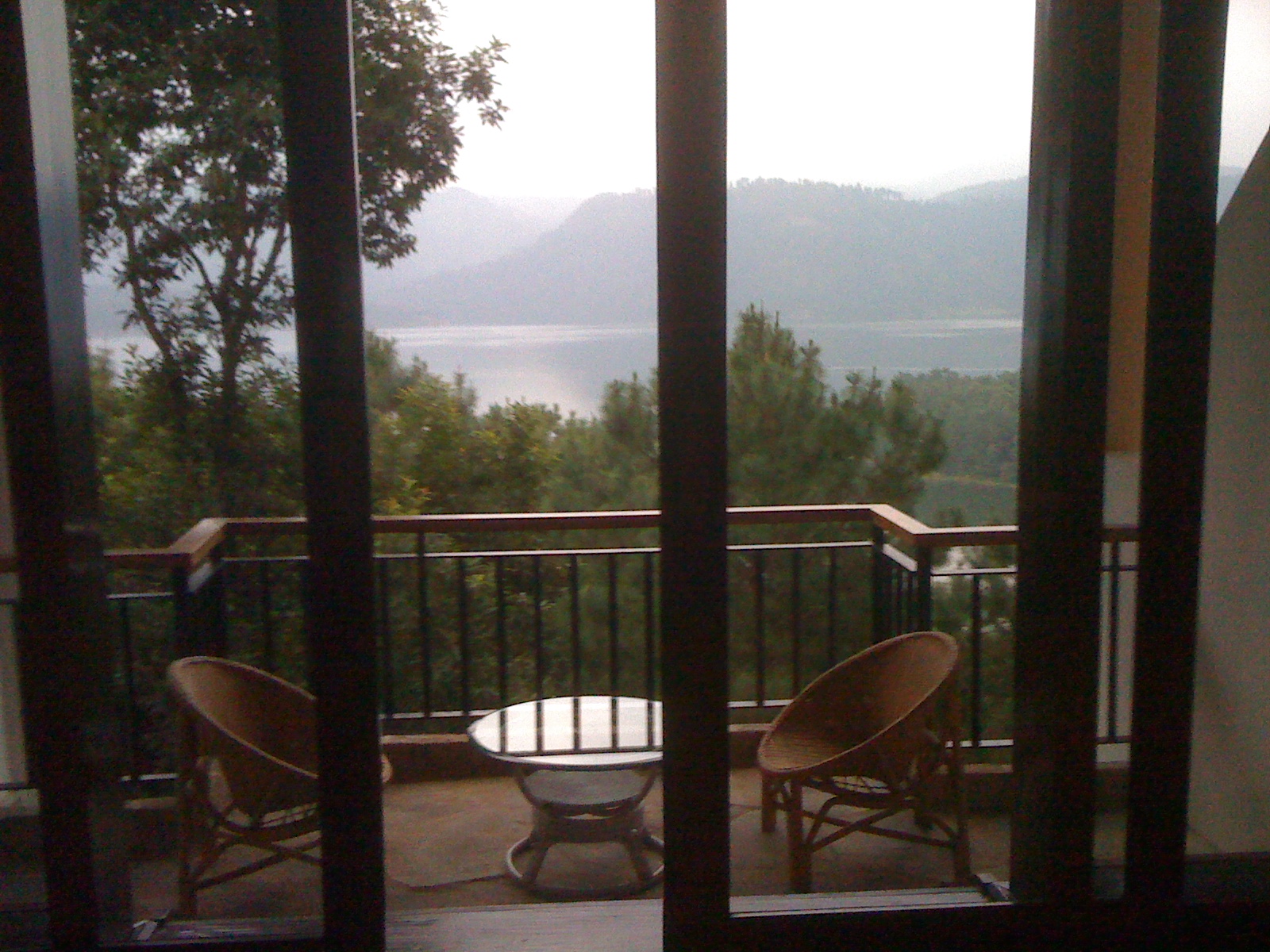 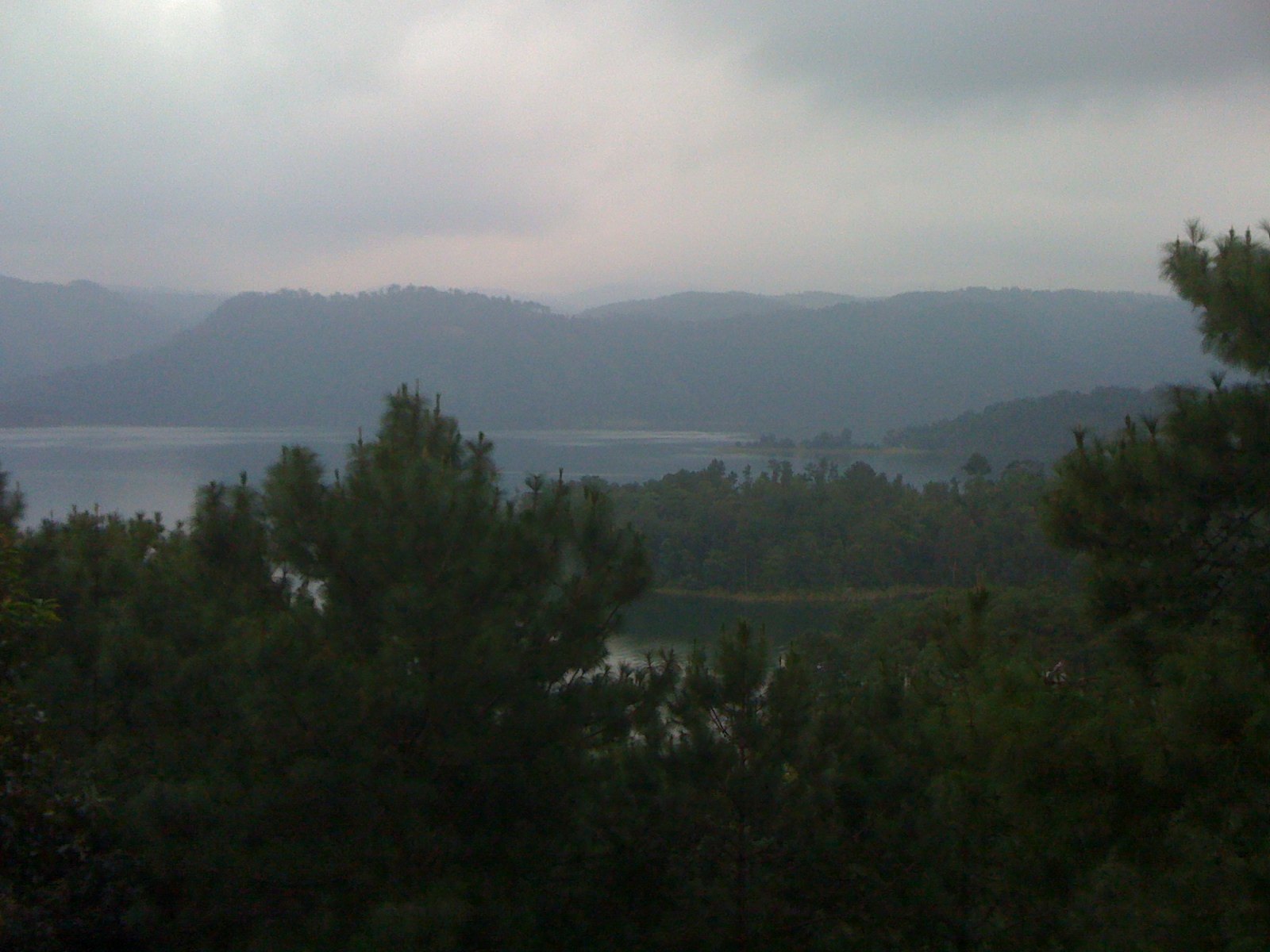 The band and crew meet for dinner at the hotel restaurant. We’re all looking forward to a tasty curry, not to mention the only meal we’ve had all day. We’re a small group of ten and it appears we are the only guest at this hotel. Since we are all ravenous we figure that it would be quicker if we all order the same thing. Not so, we wait over an hour for the appetizers to arrive and even longer for the main course. When the food finally does make it to the table we’re all nearly fast asleep in our chairs. Everyone rushes through dinner and back to their rooms for a long awaited good nights sleep.
Back in my room, I decide to take a shower before bed, but there’s no water. Upon investigation I find out they turn off the water at 9pm until 9am. Ok, well that’s interesting. Also the rooms have no phone, no television, and not a drop of cell signal. None of us have had cell signal since we landed in India. Our TM has been struggling to get texts and emails out to management for days. Oh well, sleep comes easily and lobby call is early for our 45 minute drive to the gig.