How to Deal With Competitive People 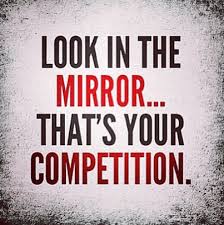 Or How to Encourage More Cooperation

Most of us working in the music industry work with people we view as being overly competitive and are often viewed in a negative light. We all desire a workplace where everyone works as a team and gets along, where the environment is productive and enjoyable. Co-workers that are overly competitive can create a hostile and negative work environment. Here are some ideas on the role of competitiveness in the work environment and will allow you to reflect on your ideas and how to handle overly competitive co-workers.It is important to understand competitiveness as women. There are gender differences, and competitiveness is one. We have been conditioned to conform to a certain set of social norms. Women are taught from an early age that it is unbecoming to be assertive.  Men are taught be more aggressive, don’t throw like a girl.

How competitive is your workplace?

Some workplaces are naturally competitive (such as sales), but there are environments where being competitive is not part of the job. A tour should not be super competitive, each person is doing their job as part of an overall team that puts on a great show. Although, we all know this is often not the case. Crew members vie to be on the production managers a-list, techs taking the engineers job, crew members trying to get their friends the gig and the general level of gossip. It is important to know how to approach and deal with this type competitiveness

Then consider the benefits and drawbacks of competitiveness. Sometimes being able to work with a competitive person leads to successful outcomes, on the other hand, competitiveness without restraint can exhaust ideas and push out less competitive and talented people. It can eventually create a negative and hostile work environment.

It is important to learn the difference between arrogance and ambition. A co-worker that has ambition is driven by the need to improve and grow. An arrogant person just assumes they are superior.  Once, you can spot the difference it makes it easier to find co-workers you can trust and work with in a positive manner.

You must learn to trust your abilities first.  You were hired for a reason, and you are a part of a bigger picture.

How do you view competitive people? Do they upset you? Have you considered that they may be threatened by your abilities?  Don’t allow yourself to be drawn into their drama.

Do you feel insecure? Can you determine why? Do you need additional training to reach the next level?  If so look into training options available to you.

Coping with the Competitiveness

Know that a competitive person might be trying to undermine you, but always conduct yourself in a professional, polite and civil manner. Do not engage or react in the heat of the moment.

Sometimes negative competitive co-workers are insecure, and if they notice that you do not wish to cause them harm, they may decide to be nice to you.

Try working with openly competitive colleagues. What positive things can they bring to the team?

The superstar needs to shine and will go above and beyond the call of duty to do so. This person needs praise and can inspire others. However, this person needs to understand that they are still responsible to the team.

The weightlifter takes on extra workloads. Helpful provided they don’t overdo it and don’t become territorial.

The speeder wants it done yesterday. Beneficial provided they are precise. Unfortunately, being precise is not something they are always able to provide. You should check their work.

Be risk averse with the sneaky competitive colleague. These people like to undermine co-workers using devious means, including making other people around them look bad.  A sneaky competitive co-worker sees everyone else as potential threats to their job and skill set. They often conveniently leave out information, such as leaving out that you or others assisted, forgetting to cc you on emails, or taking credit for a project that involved others.  You will have to learn to maneuver around them, as well as standing up for yourself.

Here are some suggestions to deal with competitiveness and these are also good suggestions if you are dealing with sexism or sexual harassment.

Keep copies of everything you do, especially anything involving this person or their responsibilities. If documenting harassment keep detailed notes on time, date, place, and what occurred. If this co-worker tries to blame you for anything, you will have your bases covered. Doing this allows you to stand up for yourself with confidence.

Keep your boss and team apprised of your work progress.

Avoid sharing personal information about yourself with such a sneaky co-worker. Keep all conversations professional and distant.

Talk to the sneaky co-worker and call them on their tactics, letting them know they can’t push you around. If you are uncomfortable with confrontation, find another co-worker that is willing to approach them with you. Discuss with your boss or HR department (if you have one) about the impact this person is having on your work performance and the work environment.

Minimize contact. If hostile, negative, or undermining behavior is ongoing, try limiting your interactions with them.

If you’re in a hostile competitive work environment, it often originates from the top. It is possible your boss is encouraging and fostering competitive behavior.

You can try and talk to your co-workers.  Try to discern the general feelings about the work environment. Do not name call or start a crew rebellion. After talking with your co-workers and you feel there is enough concern and feel comfortable doing so, you can raise the issue of competitiveness with the correct management.

You can raise the concern with your boss and discuss what their views on teamwork are or talk to higher level management or human resources if you’re concerned that your workplace environment is too divisive.

It might be time to leave if you can’t find a way to deal with the competitive divide and conquer environment.  It is often hard to change and environment or culture, as many of the employees will pick up the attitude of their bosses. In other words, the environment has become normal.

Sometimes the best policy is to be the change you want to see in your work environment.

Use inclusive language. Use we over me.

Treat everyone as equals.

Demonstrate that you value people and their skills, not their willingness to upstage everyone.

Don’t drop to their level. It will not make the situation better.

Competitive people are often motivated by fear. Once you realize this, you can develop a compassionate perspective.

You don’t have to compete.

Try being curious. Ask questions about how they’ve reached that solution or how they came up with an idea. Learn to listen; you may learn a great deal and improve your abilities.

Don’t push the barrel uphill. Sometimes you just have to let them do their