Hiring a Producer Vs Booking a Studio 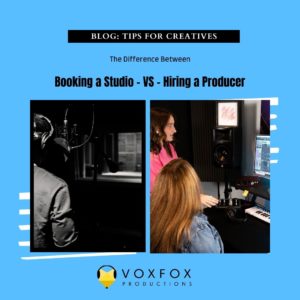 So you’ve written a song or two…or five. You want to put out an EP. What’s the first thing you do? Start googling “recording studios near me”, right?

Maybe that’s not exactly how to go about it.

“So how should I go about it, Becky?”

The first question to ask is this; “Am I wanting to take a snapshot of my song as it is or do I want to commercially release it and have it sound like other commercial releases?”

Before we get into this, let’s define some of the terms I’ll be mentioning so you know exactly what they mean.

The orchestrating of all parts in a song or facilitating the orchestration by the musicians either hired out or created by the artist/band themselves. Selecting the sounds, designing sound effects, bringing an artist or band’s sonic vision to life.

Mixing: The process of using volume levels, panning (where a sound lives in the stereo left to right spectrum), frequency equalizers, reverbs, delays and other effects to create space and separation of all the recorded/programmed elements in a song.

The final treatment after a song has been produced and arranged, recorded and mixed and sounds well balanced. This process usually brings the overall volume up to standard, adds a shine or polish, more punch or more smoothness to the overall sound, depending on what the song is calling for.

I made up these definitions so don’t yell at me if I’m not quoting your music production textbook.

Recording studios are all about capturing a “snapshot” of what you are bringing. If you have a crappy-sounding acoustic guitar, their $6000 microphones and $10,000 worth of preamps and compressors will capture that crappy sound beautifully. If your singing is mediocre, your mediocre singing will sound silky smooth. You get my point?

A commercial recording studio usually has larger acoustically treated spaces for the best quality you can get, specifically for recording instruments like drums or string ensembles, or choirs.

A recording studio usually has a “control room” which is where the engineer is sitting at the recording console, and the artist or musician is in a separate room viewed through a glass window. This separation again creates the best possible acoustic setup.

The studio usually has at least one but often several engineers who will do the recording. This engineer can range from a beginning-level intern to a genius wizard and everything in between. You may find a favorite after working with a few different engineers.

Your engineer may or may not be a producer or arranger. Don’t assume that they will be.

There’s a good chance your engineer won’t care if your song sucks. You show up with your song that says “I can’t believe you broke my heart, I should have known from the start” they won’t say a word. Remember…snapshot.

The cost of the studio and engineer are usually separate. The studio space might cost $75/hr and the engineer may cost an additional $100/hr. Be sure to double-check before booking.

You can usually get “block deals” at a studio. This means you can book the studio for a whole day, including an engineer for a discounted hourly rate. This can be great for bands who are really well-rehearsed and want to record as a band at once with very little over-dubbing. The danger in doing block deals is that bands usually try to squeeze in as much as they can in that time. By the end of a 12-hour session, your singer may have lost their voice or everyone is just flat out exhausted. What happens at the end of the block could be quite different than what happens at the beginning of the block. Another deal studios sometimes have is something like “record your song for $100!” This might actually mean “we’ll take a snapshot of what you give us (see #1) and we only have 2 hours to do it so let’s hurry”. What you’ll have in the end might be a nicely recorded demo.

The studio may include mastering but may not. Be sure to check.

As defined above in the terms, a producer is often the person doing all of the arranging and orchestrating. What this means is that your producer needs to have an understanding of exactly who you are as an artist and what your sonic vision is for your music. This means a lot of communication, not just a “show up and record”.

A producer is like the sculptor of your sound. The importance of open, respectful and honest communication both ways is of utmost importance. A producer who gets “offended” if you don’t like something or who doesn’t seem to “get” you means you will be compromising every little decision about your song until in the end, you don’t love it. So find a producer you can trust to listen to you.

A producer is often the one recording and mixing everything. Make sure they have a good quality sound coming from their productions. Listen to their past works and make sure it lines up with your quality standard.

A producer is usually working out of a home studio. Make sure their recording space is comfortable and has a good vibe. While home recording spaces certainly won’t be as epic as a huge recording studio, there should still be a sense of professionalism and order there. If it’s messy or uncomfortable then you won’t be comfortable recording and may not give your best performances.

Oftentimes a home studio doesn’t have a separate control room which means leave your friends at home. The more people in the room where you are recording the more chance there is that your producer will have to keep shushing your friends which isn’t much fun.

A producer should be interested in elevating the “bones” of your song (aka the lyrics and melody). A great producer will want the song to be the best it can be and they know that the greatest arrangement and production won’t “fix” a poorly written song.

If you love the producers’ arrangement but the final mix and master are not at the quality you want, it is 100% acceptable to ask them to outsource the mixing and mastering or ask them to send you the “stems” (which has become the term for individually recorded tracks in your song) so that you can find someone else to mix and master the song.

A producer may also be a mentor, not just someone who makes your music. If they have experience in the industry and they are willing to share insight and wisdom, that is worth grabbing on to! Even better if they can help guide you in the backend side of your music business, including marketing and strategies for building a fan base. (PS That’s how we do it at VoxFox Productions! 😉 )

So before doing that google search, ask yourself what you want the end result to sound like and what it is for. In a nutshell, it could be simplified to this:

Looking for a Creative Partner: Hire a producer.

Becky Willard is a Warm Audio featured artist, a music producer, recording engineer, songwriter, composer, vocalist and mentor. She began working with artists almost 30 years ago as a vocal and songwriting coach.  It was a natural transition from coach to producer as she guided singers searching for their sound and began recording them in her home studio.

In 2010, Becky founded Vox Fox Studios and has become the go-to producer for many Utah artists as well as artists from all over the world. These artists go to Becky to produce their music because they know they will get their best vocal performances, modern production sounds and mixes that are “radio-ready”.  As a songwriter herself and session vocalist, her songs and voice can be heard in dozens of TV shows and movies. As a woman in a male-dominated field, Becky is actively engaged in educating and inspiring young women in her community and worldwide to pursue music production and engineering.