Amy goes where the work is and where the wind blows having worked in professional audio for over 20 years. Amy most commonly works as a FOH engineer for corporate and broadcast events and as a monitor engineer on festivals. Amy has always had a love of music and electronics and has found that a career in professional audio was a perfect match. Working freelance complements her gypsy lifestyle, although, given the right circumstances, she would love to find a steady home.

Amy’s grandfather was a professional jazz musician, and growing up Amy remembers watching her grandfather practice in his basement. He played the Clarinet, Alto Sax, and Tenor Sax and would inspire Amy to take up the trumpet while in Jr. High School. She would later get to play a bit with him and she still has all of his horns. He was one of the greatest influences in Amy’s life. Amy remembers, “during birthdays, holidays and other special occasions, he would always place a mono cassette recorder on the dinner table or in the middle of the room. I still have several ancient cassettes of these occasions. So, from the time I was a very small child, I was always surrounded by music and audio equipment”

Along with a love of music, Amy had a curiosity to figure out how things worked. Her mother would always pick up old stereo equipment and other odds and ends at garage sales. A lot of the equipment did not work, which saved Amy from ever being electrocuted, but she did manage to start a few fires. 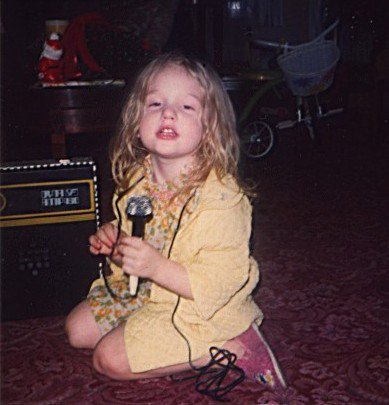 After high school, Amy attended Kent State University for a semester, as a Pre-Journalism/ Mass Communications major with a minor in Radio/Television Production. This allowed Amy to discover a desire to work behind the scenes in a technical position. However, she found their equipment was so antiquated, and it did not allow involvement until junior or senior year, so she decided to fast-track it and enrolled in The Art Institute of Pittsburgh. Amy enrolled in the Music/Video/Business program and found that The Art Institute opened many doors for her.

When her internship ended, Amy headed to Florida and attended Full Sail, graduating with a Associate Degree in Recording Arts. At the time, Full Sail only offered two-degree programs: Audio Recording or Video/Film. Amy says “the studio maintenance course with Hunter Menning was the most valuable in terms of knowing how the gear worked from the inside out.  All of the courses taught me something, but that one stands out. She found that Full Sail gave her credibility and opened up even more doors for her.

After graduating from Full Sail, Amy headed to Los Angeles with a shortlist of names and numbers. One of her first gigs was working staging for Kevin Lyman of Goldenvoice, (who would go on to found The Warped Tour) for a Meat Puppets gig in Long Beach. There she met Dave Rat who would recommend her for a gig at the Anti Club. Industrial Sound would help her out too, and Tom Santee of Auntie M, got her mixing gigs right away. Amy remembers a gig in Monterey Park doing sound for Mariachi bands, which was a first for a girl from Ohio. The Anti Club gig would help her land a gig at the Troubadour, and then the Northridge Quake hit.

Amy decided that maybe Los Angeles was not for her and being the high-tech gypsy she is, headed to Seattle. She was able to get a gig at Moe’s on Capitol Hill and says it was the best house gig ever. Amy kept that gig as long as she could and watched as the Seattle music scene of the ’90s came to an end.

From Seattle – Amy headed back east to Chicago. She worked at Andy’s Music and Chicago Sound doing all the summer music festivals at Grant Park. As that was winding down, she got a call from The Ringling Bros. Circus about a Monitor Engineer position available on their Blue Unit. Amy toured the U.S. mixing both FOH and Monitors in major arenas with the circus band for the last four months of a two-year tour as a replacement engineer but decided not to sign a two-year contract to tour the next show.

She headed back to Los Angeles, where she stumbled upon the existence of highly lucrative corporate gigs. Amy landed a gig as an audio engineer for AVHQ Staging Division in Los Angles. She remained there for over two years until they were absorbed by another production company and started to lay everyone off. Since then Amy has remained a freelance engineer working all over the U.S.

Amy has even dabbled in television work. Working on a reality show called Paradise Hotel in Acapulco, Mexico in 2001 and another one called Next Big Champ around that same time. She also mixed 26 episodes for a series for the Jim Henson Company in 2000. While the pay was fantastic, the gigs were absolutely grueling. Long days hiding in bushes with a 35-pound field mixer and RF receiver packs weighing heavily on your lower back while holding a big boom up for hours at a time. Amy did her best to avoid things like killer bees while picking up the intimate dirt of cast members attempting to secretly plot against the others. Amy says “It felt more like boot camp than a career accomplishment, and it was beating me up pretty bad. It was quite an effort to keep that boom up there when I only stand at 5’4” and they never say “Cut” on a reality shoot”.  The Henson project was a rare non-union opportunity Amy was absolutely proud to be a part of. Unfortunately, the series didn’t get picked up for a second season. Amy would love to get back into television if the opportunity was ever offered.

Being a freelance engineer has allowed her to indulge her inner gypsy, but Amy also feels that she has been forced to move around a lot. “It’s not an easy industry for anyone, but I’ve seen a lot of guys move up while I plateaued. I found that the only way to really increase my knowledge was to move around a lot. It gets frustrating when guys who can lift more weight, get more breaks, and you’re toughing it out and doing your part to the best of your ability”. Amy has stuck it out by networking and looking for work everywhere, settling into corporate work, which tends to be very lucrative and steady. Corporate work also tends to require less physical lifting of gear due to larger crew calls.

Amy reflects on some of the calls she gets for gigs because she is a woman, like the Mary Kay convention. “They actually wanted me to work the show while wearing a dress. You try so hard to blend in, and even something like that which seems like an opportunity is ultimately repressive. I’m more than happy to take a gig where they want me for whatever reason, so long as the company hiring me puts me on other shows as well. Most of the time those “we want a female engineer” shows go bust, and you never hear back about the other shows”.

Amy offers this advice to women wishing to enter the field

If like me, you are stricken with the sickness of an innate love of audio, don’t be discouraged if you get stopped at the front door. There are lots of side doors in and you can make it happen if you want it bad enough. I’m not sure spending a lot of money on education is a good idea in today’s economy. I’d take some electronics classes and volunteer to help small local sound companies in return for training and future employment opportunities.  After that, hit up as many manufacturer trainings as possible. It’s a hard profession to make a living at and retain any resemblance of life, but it’s one of the most exciting careers a person can pursue. I’ve had a lot of highs and lows causing me to have a love/hate relationship with it, but I’m still here.

Mechanical dexterity, keen listening skills, knowledge of a wide range of musical instruments and styles of music, organization skills, electrical and wiring skills. The ability to use hand tools. Most of all, the ability to work under extreme pressure and be solution-driven when it all hits the fan, because at some point it will, and it’s more about your ability to recover from chaos than anything else.

As a freelance hired gun, I don’t often get the luxury of picking and choosing my own consoles or PA system components, so if I’m going to be completely honest… My favorite gear is gear that has been well maintained and is in good working condition. When I do get to choose, it totally depends on the application.

Transitioning in the Music Industry

Laura Nagtegaal is a trans woman, fully tranisitioning in 2017.  This is her experience working in the music industry.
Read the Full Profile

Suzie Brutke-Smurdon has always loved music and knew she wanted to be involved in the music industry, but being a musician and performing in front of a crowd was not for her. Instead, she started looking at audio engineering with a plan of going into music production. She is now the Co-Owner of Cedar...
Read the Full Profile

Lisa Affenzeller is an independent FOH Engineer, who works mainly with Heavy Metal bands, such as Butcher Babies, TesseracT, Kobra & the Lotus, Devin Townsend Project, Overkill, Annihilator. She has been working in the industry for over ten years.
Read the Full Profile
We use cookies on our website to give you the most relevant experience by remembering your preferences and repeat visits. By clicking “Accept All”, you consent to the use of ALL the cookies. However, you may visit "Cookie Settings" to provide a controlled consent.
Cookie SettingsAccept All
Manage consent