One of the major hurdles of becoming a sound effects editor is learning your library.  This means knowing what keywords to search in a given situation as well as building up a mental catalogue of “go-to” sounds. 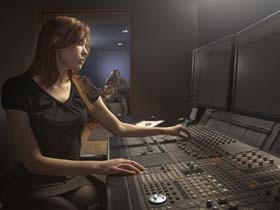 While it is always a good idea to start by looking at the picture and then thinking of descriptive words to search, it helps if you know which words will yield the best results.  This is where onomatopoeia enters the scene.  Onomatopoeia is defined as the formation of a word from a sound associated with what is named (e.g., cuckoo, sizzle).  Following is a beginner’s guide to onomatopoeic sound effects search words.  Some of these terms can be found in any dictionary, and some are unique to sound effect library naming conventions.

body fall – a sound made by a body falling onto a hard surface. Also, look up: body hit, land

buzz – a humming or murmuring sound made by or similar to that made by an insect. Also look up: hum, drone, insect, neon, fluorescent

click – a short, sharp sound as of a switch being operated or of two hard objects coming quickly into contact. Also, look up: clack, snap, pop, tick, clink, switch, button

flutter – the sound of flying unsteadily or hovering by flapping the wings quickly and lightly.  Also look up: beat, flap, quiver, wing

glug – the sound of drinking or pouring (liquid) with a hollow gurgling sound. Also look up: pour, drain

groan – a low creaking or moaning sound when pressure or weight is applied to an object OR an inarticulate sound in response to pain or despair. Also, look up: creak, squeak; moan, cry, whimper

honk – the cry of a wild goose. Also look up: gander, goose

ahoogah – the sound of a particular type of horn.  Also look up: model a, model t, antique horn, bulb horn

jingle – a light ringing sound such as that made by metal objects being shaken together.  Also, look up: clink, chink, tinkle, jangle, chime, sleigh bells

poof – used to convey the suddenness with which someone or something disappears.  Also look up: puff

quack – the characteristic harsh sound made by a duck. Also look up: duck, mallard

rustle – a soft, muffled crackling sound like that made by the movement of dry leaves, paper, cloth, or similar material.  Also look up: swish, whisper, movement, mvmt

skid – an act of skidding or sliding.  Also look up: slide, drag

splash – a sound made by something striking or falling into liquid.  Also, look up: spatter, bespatter, splatter, bodyfall water

splat – a sound made by a wet object hitting a hard surface.  Also, look up: squish

swish – a light sound of an object moving through the air.  Also look up: whoosh, swoosh

swoosh – the sound produced by a sudden rush of air. Also look up: swish, whoosh

thunk – the sound of a cork being pulled out of or placed into a bottle or jug.  Also, look up: pop, cork, jug

twang – a strong ringing sound such as that made by the plucked string of a musical instrument, a released bowstring, or a ruler held steady on one end and plucked from the other.  Also, look up: ruler twang, boing twang, ripple, pluck, violin, guitar

whip crack – the loud and sudden sound of a whip moving faster than the speed of sound, creating a small sonic boom. Also look up: bullwhip, whip, swish, whoosh, swoosh

whoosh – a heavy sound of an object moving through the air. Also look up: swish, swoosh

woof – the sound made by a barking dog.  Also look up: bark, howl, yelp, whimper, dog

Missed this Week’s Top Stories? Read Our Quick Round-up!
How to be the New Crew Person