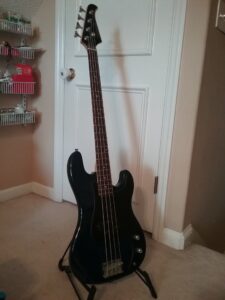 Several years ago my husband was stationed in Afghanistan.  He rescued a sad, abandoned bass tagged with a stencil of his unit and brought it home to me, disassembled.   To the best of my abilities, I attached the neck to the body and checked it for signs of neglect.  Its pickups were not secured to the body of the bass at all, and shaking the bass caused the worst maraca sound.  I was afraid to even plug it into an amp.  Besides the electronics, it was in decent shape and was playable.  I decided that this bass would be my “frankenbass.”  A monster I would experiment with, and hopefully bring it inner peace.

When I finally gathered the courage to plug into the amp, it sounded muddy, but not broken.  A slight hum from unshielded electronics only became annoying when using the tone knob.  Still, I decided that the way forward was through shielding the cavity and pickguard and replacing the pickups.  The design of this Silvertone, serial number-less instrument was influenced by the Fender Precision Bass, and my musical style often intersects with Motown, therefore I opted for 60’s replica P-bass split pickups.  More specifically, a demo model to fit my budget.

Before shielding the bass, I cleaned the electronics with rubbing alcohol.  Fortunately, the routing within the cavity was not so rough that it needed much sanding.  I started with the back of the pickguard to warm up.  Applying the copper shielding reminded me of middle school, peeling the foil off of gum wrappers to cover folders and using an eraser to buff out the wrinkles.  Side note:  I was not much of a gum chewer in middle school.  Per some internet advice, I had an Exacto knife and a rubber bouncy ball to help me with cutting and buffing the shielding.  I also used a good portion of my vocabulary while peeling the backing off the copper, as it loves to curl on itself.  Good thing I started with the shielding because that was the hardest part. 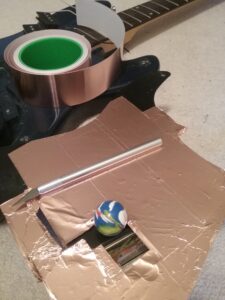 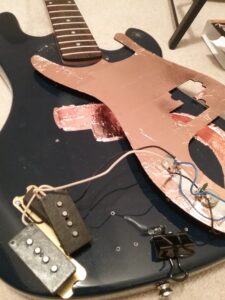 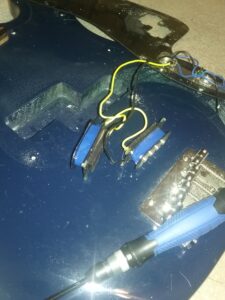 Compared with shielding, replacing the pickups was a breeze.  I clipped the wires of the old pickups (yellow for hot, black for ground), then soldered the new wires (white for hot, black for ground) in their place.  The new pickup covers did not match the pickguard cutouts, so I kept the old ones (which means I didn’t bother to get a pic of everything assembled, as it looks the same as the before photo).  Slap on some new strings and get to slapping.  When I plugged in the frankenbass, I heard a beautiful sound:  silence!  No hum!  The shielding worked.  After turning up the volume, I was greeted by the warm tone that I wanted.  Bright and clear, warm and round.  It’s alive!  It’s alive!  It’s ALIVE!  Best feeling ever.