In my journey to learn more about different jobs in audio, I have decided to share what I learn within these blog posts. My first topic is one that I am most familiar with: foley. As a foley mixer and editor, I am often asked: what exactly is foley?

If you’ve watched a film lately, you’ve heard Foley. Foley is the reproduction of sound for any visual medium. Foley is in film, television, video games, VR and digital media. The art of foley is named after Jack Foley, an early sound effects artist. Jack was a pioneering developer of performing sound effects live and in synchronization with picture. We need to re-record these sound effects because often what is recorded on set is unusable. Microphones on set are focused on capturing the actors’ dialog as cleanly as possible; therefore all other sounds become neglected.  Everything you hear in a film – from footsteps to handshakes, kisses to puking – is created specifically for and in sync with a picture. 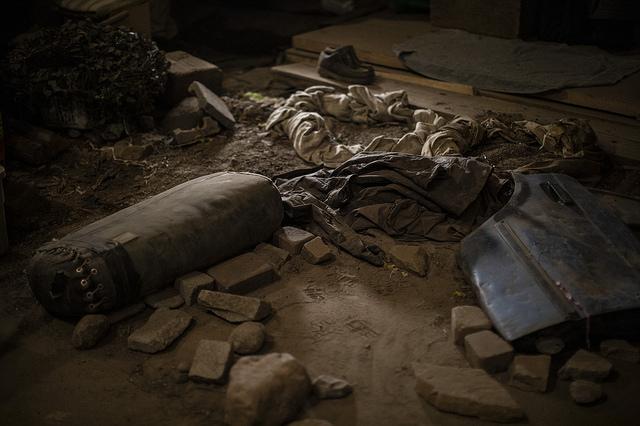 Some props and different surfaces
Photo by Jeremy Benning

Foley as we know it today consists of a team of usually 2-3 people in a studio performing, recording and editing everything you hear on screen. Okay, maybe not everything… we leave the explosions to the sound effects editors. Each member of the team plays a different role in creating and capturing the sounds for a project. And those members are:

These are the people who begin to bring characters to life, sonically. They are tasked with recreating the sounds for anything the actors interact with and anything on screen that would make sound. The foley artist manipulates props to create these sounds as well as performing footsteps for the characters on screen.

While the whole team has a role to play in the sonic quality, the mixer works with the microphones, preamps, and other gear that may be used to capture the foley. We generally use two microphones (a ‘close’ mic and a ‘far’ or ‘room’ mic) for interior locations on screen and one close mic for exterior locations. The mixer is in control of the balance of these microphones and uses the two in combination to create perspectives or distance in the sounds.

This is a fairly fluid role and is often varied depending on the foley studio. The editor may be part of the team before or after the recording stage. Sometimes the editor and mixer roles are combined. In general, though, the job of the foley editor is to ensure that all of the recorded sounds are in sync and without any artifacts or distortion. The foley editor uses software such as Pro Tools to perform these edits. The editor may also play a part in the creativity of the sounds; manipulating what was recorded into something different. For instance, they may pitch down a set of footsteps to give a character more weight. 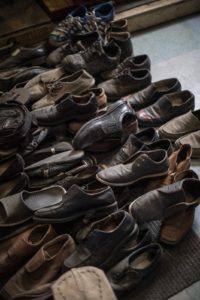 An assortment of foley artist’s shoes
Photo by Jeremy Benning

First, we begin with the footsteps. The artist chooses a pair of shoes to suit the character and we go through scene-by-scene capturing footsteps. On our second pass through, we cover all of the props. These are items that the actors interact with that would make sound. This includes simple things like putting down a glass or shaking someone’s hand to more complex sounds like swords unsheathing or a person skateboarding. The final pass is the cloth pass. This is where the artist manipulates different types of material to capture the sounds of characters’ clothing movements. The cloth pass adds another layer of subtle depth to the soundtrack; giving the characters even more life.

Once all passes have been completed, and everything has been edited and synced, we prepare the session for delivery to the final mix stage. There, our tracks will be combined with the sound effects, dialog, and music to create the complete, finished soundtrack.

When Foley is done well, you generally don’t hear it. That’s because it fits in so seamlessly with what you are visually seeing that you shouldn’t notice it. If something stands out, it can take the viewer out of the experience. That is what we aim for every day – our work to not be heard. It sounds bleak, but it is actually very rewarding. We often are so absorbed in what we are creating that it becomes almost a challenge to get a reaction out of each other. When the artist performs a perfectly in sync, great sounding footstep pass, we all cheer. When we build a really gross sound, the usual indicator of where we’ve reached peak grossness is based on those reactions too. If the artist looks back and sees my face contorted in disgust, we know we’ve just made magic.  Ultimately, the natural human elements that foley can bring to a soundtrack are irreplaceable. 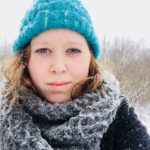 Chelsea Body is a freelance sound editor and foley recordist based in Toronto. She is a graduate of the Audio Post Production and Music Industry Arts programmes at Fanshawe College and is currently a Foley Editor and Operator at Footsteps Post Production.

What’s In Your Go Bag?
Tips for Staying Healthy on the Road