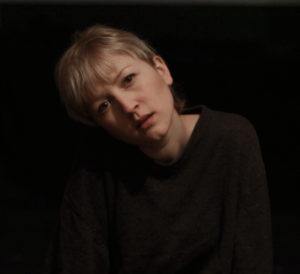 Grace Banks is an independent studio engineer based in London, UK.  She has worn many hats in the field including recording engineer, mix engineer, musician, producer, and composer.  She is a multi-instrumentalist and has toured as a session musician in many bands.  She plays keys, guitar, electric bass, percussion, and sings.  She has also worked for the music label, Nonclassical, and Help Musicians UK, a charity that researches musicians’ needs, gives grants, and organizes competitions.

When I was a kid, I would make my dad play the piano so that I could record it on my tape machine, or I would get my toddler brother to perform into the mic.  I was fascinated by music and by capturing performance.

As she grew older, Grace would record guitar and vocal harmonies on a four-track tape recorder.  She began to perform at seventeen and was offered a place to study music production at eighteen.  Although she had the passion to succeed and her mentors recognized her gift, the adults in her life steered her away from pursuing a career in music. And like many aspiring musicians, Grace was encouraged to try a different field.  Grace began to work at an engineering firm having won a place to study Civil Engineering at university.

I figured, if I didn’t make music I would always feel envious of those who did.  And I couldn’t justify not trying, at least.

So, a month before Grace was supposed to begin university, she persuaded the music department to offer her a place.  She concentrated on composition, orchestration, and theory and graduated with first class honours.

From Musician to Audio Engineer

She wanted to pursue studio work or a Masters in Composition after graduation but was unable to afford the education.  So she moved to London where she thought there might be more opportunities.

I wrote to recording studios but got zero responses.  I played gigs but, while the gigs I had done outside of London paid half a week’s rent, the ones in London wouldn’t give a free drink, let alone a fee.  I busked on the underground until, one day, a man stole my money.  I did a plethora of bitty jobs, before finding an office-based nine-to-five.

While working in an office by day, Grace was seeking out and studying with mentors in the evenings.

At gigs, I would head to the sound desk and ask to shadow the engineer.  A couple of them agreed, and I am indebted to them for their patience and encouragement.  At this stage, I was too terrified to touch the desk – so I would just watch and offer endless bar runs in the hope that they would invite me back. A year or so later, I got hired to tour as an instrumentalist.  I would hover behind the sound engineer and pester him with questions.  On my return, I set up a residency, booking singer-songwriters for a small basement bar – partly because I wanted a ‘safe’ place to get my hands on a PA and try mixing.

Then, one day in a rehearsal studio, a member of staff saw that Grace knew how to setup and troubleshoot audio gear and offered her a job. After a few months at the studio, Grace moved house and heard rumors about a recording studio on the same street.  She sent a curriculum vitae (C.V), otherwise known as a resume, and coincidentally, the studio was looking to hire staff.  The recording studio was interested in her background in classical music mainly, her ability to read scores and experience as a multi-instrumentalist – had stood out and impressed them.  However, her primary asset was proximity to the studio, which meant she could (and did) come in at five minutes’ notice and lock up at any hour of the night.

Having begun applying for studio runner positions at 21, Grace finally got her foot in the door at 28.

The Challenges of a Studio Engineer

One of the studios I first applied to wanted someone who could be available, unpaid, seven days a week – in London, especially, that is not an option for some.  This kind of expectation precludes many from entry into this career

While dealing with these financial challenges, Grace often forfeited stability, relationships, comfort, and safety and she learnt to live on a shoestring budget.

I was homeless for a while – mostly couch-surfing with friends; government benefits tided me over.  There can be a lot of shame attached to benefits, but they are essential for social mobility and are the unofficial arts grants.

When I eventually got work at a recording studio, the pay was about half of the living wage; also, the work was piecemeal, and there were no contracts.  I found part-time, flexible jobs that I could fit around the studio.  Needless to say, I had almost no social life for a couple of years.

Grace took responsibility for her education, writing regular ‘study’ periods into her diary, using books, YouTube tutorials, online articles and real-life mentors.  She made a list of skills she wanted to prioritize, such as drum-teching, guitar-teching, and mixing, with a sub-list of people who could help her improve each of them.  Once she figured out her game plan, she would introduce herself to those on the list and ask if she could shadow them.

Love for the Job

Grace has experienced both the touring artist and the studio engineering lifestyle and said that she loves both.  With touring, she enjoys the sense of camaraderie, the excitement of seeing new places and not knowing what’s going to happen from day to day.  On the technical side, she enjoys logical thinking and the goal-based nature of the work.  Unpredictability can be exciting, too; she could be called to Manchester one week, Portugal the week after.  She also loves how she is continuously learning.

Every session I do and everyone I work with teaches me something.

Best of all, she loves working with amazing artists and having the opportunity to capture their performances so that the magic can be witnessed by others.

It feels like finding a beautiful gem and holding it up to the light.

I have just acquired a MoogerFooger 12-stage phaser which I am really excited about. The UA 6176 is my home workhorse.  I have been doing a series of vocal mic shoot-outs with a friend who is also an engineer, which has been fun.  Also, the Roland RE-501 Chorus Echo: it’s another world, and you can get lost in it.

In order to survive as a freelancer, Grace attends networking, technological, and industry events.  She has also built good relationships with studios that give her regular work. Additionally, Grace pursues engineering along with other jobs.  She still works as a session guitarist, which helps her recording work in many ways:

such as meeting musicians who might want a studio or engineer down the line, and improving my understanding of what musicians go through under pressure, how they communicate, and so on. 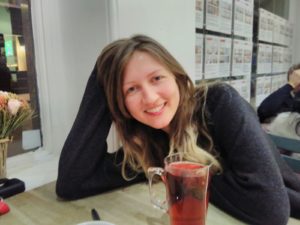 We asked Grace for tips for those SoundGirls and SoundWomen who wish to enter the field:

3) Have someone you can call for advice in an emergency.  (Remember, you can always post on the SoundGirls Private Facebook page.)

4) A good mentor is invaluable.

5) You probably know more than you think you do; studies suggest that women are more likely than men to underestimate their abilities.  Keep stretching your comfort zone.

Grace’s long-term goals include more writing for and with other artists. 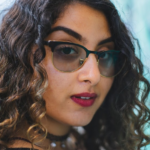 Profile By: Michelle Naziri (“Miche”) is a Liberal Arts-Engineering Studies student at California Polytechnic State University, concentrating in Electrical Engineering and Sound Design. Over the summer Michelle worked as an intern for VUE Audiotechnik under VP Operations and SoundGirl, Sara Elliott. As an intern, she got to help with prototype experiments, reverse engineer speakers, fix amplifiers, and help assemble and test loudspeakers and subs for the Kendrick Lamar, DAMN tour. Most recently, Michelle received an internship with RagHouse Radio as an audio technician for SoundGirl April Duran for her show on Authentic Culture Network in Sunset Gower Studios. RagHouse Radio, empowering women in music, sports, and entertainment.

In the future, Michelle hopes to continue working in radio, speaker production, and live mix for bands at concerts and festivals.