For the two-day EDM festival, I was assigned to work the stage of Main West. We would get the DJs set up and hang out in the wings until the next set change. I found myself doing more odd jobs than audio-related ones. A lot of them related to power with running power to certain parts of the backstage area to hang lights.  I had to pack up quad boxes at the monitor position, as I was tired of everyone trying to use our power.

I had to find ways to manage people and keep them from causing harm to our gear with their drinks. Unfortunately, putting down gaff tape with “No Drinks” really was not effective. The problem was that there was a VIP area right next to monitor world so we would have artists and their posse cramming into the wings of the backstage area.

I also assisted the stage manager with various communication to the FOH crew. The stage manager did not have COM to FOH and used the audio departments. I’m really not sure why there was not show COM for video or lighting. We did have our radios, but the show would get so loud it was quite hard to hear them clearly and there was not a channel for just our stage. 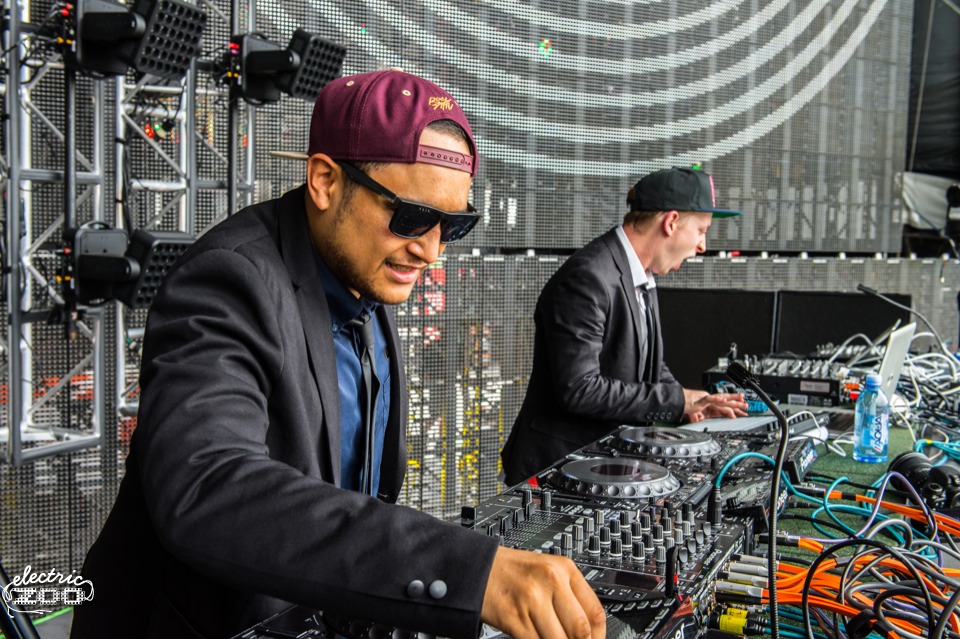 We had a few minor problems, mainly feedback issues with the DJs asking for their mics to be turned up way too loud.  We had a few other technical difficulties with the DJ rigs with quarter-inch cables being jumbled loose or unplugged by mistake. I found it difficult working with the rigs because there were unlimited possibilities as to what or who was causing the problems. For example, we had an act that throughout their performance the DJ rig kept cutting out. The backline guys tried their best to figure out what was going on but they could not determine if it was a loose connector, bad cable, a problem with the turntable, or user error. There just wasn’t enough time to fully figure it out in between each set. We ended up replacing the whole rig and running new lines.

The show was full of crazy lighting displays, video, pyro, and a whole lot of bass. There seemed to be a constant vibration from the subs and so much of it, that no matter where I stood or sat, I could feel the vibration throughout my body. It was quite an odd feeling but I got used to it after a while.

The audience added a different dynamic to the festival. It was made up of scantily clad young adults ranging from their late teens to late twenties. They all partied hard and danced all night until the music stopped. A large amount of audience participation was an awesome experience.  Whatever the DJ would yell, the whole audience would respond by putting their hands up or yelling some phrase. I have never heard “put your hands up” or f-bombs used so much in one show. The shows were definitely an interesting experience and look into the EDM world of music.

Our shows went well until the afternoon of the last day when it rained and poured. The concert ended up being canceled, and we waited for security to clear the site. A lot of the gear was soaked, and the tent stages were completely flooded. It was quite a sight and kind of depressing knowing how difficult loadout would be with water and mud.
Electric Zoo Festival was a great learning experience and I am looking forward to my next adventure.

One of the next generation of Sound Girls, Kelly works at Eighth Day Sound and has blogged about her experiences from the perspective of someone just getting started in the business.

Read Kelly Levstek's Blog
Browse All SoundGirls Contributors
We use cookies on our website to give you the most relevant experience by remembering your preferences and repeat visits. By clicking “Accept All”, you consent to the use of ALL the cookies. However, you may visit "Cookie Settings" to provide a controlled consent.
Cookie SettingsAccept All
Manage consent