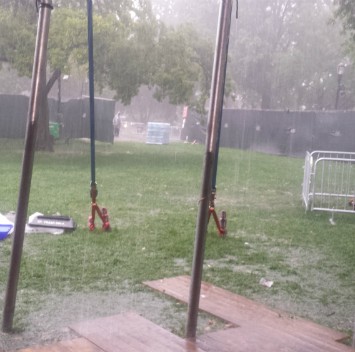 Due to the massive thunderstorm that blew through, the rest of the festival was canceled which became a slight blessing for us since right after dinner we got to start breaking down stages and load out. We were originally scheduled to load out after the show at midnight into the early hours of the next day, but now we got a four-hour head start! The only catch was that our full crew of hands wouldn’t start until 10 pm. That limited us to about five hands and our audio crew.

So we decided to tackle Main East stage first with everyone. Cable wrangling became insane with cables coming from all over the place, under the stage, from on stage, running from our amps and P.Ds and all of the hang extensions we had running to backstage. There was a lot of climbing into small dark spaces and climbing over scaffolding. I was thankful I had my headlamp on me! It was the best tool to have that night besides rain boots of course because the ground was drenched in water and super muddy in areas.

Once the cables were pretty much taken care of, things really started to move as we tore down FOH and Monitor World.   Then we started to bring our hangs in. The J8 hangs came down pretty smoothly but for our J-Sub hangs we had to stack them on the carts away from the stage due to some scaffold being in the way. So we’d bring the hang down on the ground, pull the pins, take it back up leaving the single J-Sub on its side. Then maneuver the J-Sub through the scaffolding, pull it back on its wheels and move it to a cart where four other guys would stack them. It was a painstaking process that slowed us down quite a bit, but we managed to get it done and with no injuries or mishaps.

I did fall once when I tried to pull a motor case over a wet cable ramp, and I fell right onto my back. I felt so ridiculous when it happened because everyone saw it, and the hands kept asking if I was alright afterward. I was completely unharmed just wet and a little embarrassed but I brushed it off and kept going. We had plenty more stages to tear down before the end of the night/early morning.

At 10 pm, our reinforcements arrived, so we split up into teams and tackled the rest of the stages all at once. I was sent back to my stage, Main Stage West to tear down. Once I got there, I realized everyone was in a frenzy to get the stage torn apart. Lighting, video, and pyro were moving like crazy trying to get their stuff down and packed up into their trucks before our truck arrived. It was a whirlwind of people, cables, and gear going every which way.

Trying to stay focused on methodically packing things away in the correct trunks became almost impossible with the fast pace everyone moved and worked. I was just happy that I got all items into a trunk and on the truck by the end of it all. We finally finished our stage around 3 am, just as the rest of the crew were done with their stages or just finishing up the trucks.

Load-out was a long crazy night, but I know it could have been much worse. I will never travel anywhere without my head lamp and rain boots. They are definitely on my top ten list of items to take when you work a festival. 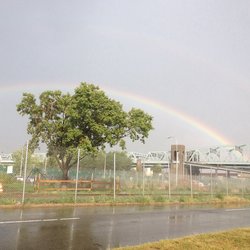