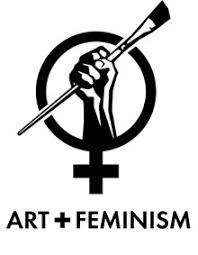 This March I unofficially participated in Kickstarter’s Art+Feminism Wikipedia Edit-a-Thon.  An edit-a-thon is an event where the attendees edit and update Wikipedia articles. Often these events have a specified purpose, and with Art+Feminism it was about women and the arts. While it generally happens in March, the Art+Feminism banner has hosted over 500 events almost every week across the globe since 2014. Events have occurred in places like the Ivory Coast, New Zealand, Uruguay, United States, and Germany.

Why is editing a Wikipedia article so important?

First of all, Wikipedia is the modern equivalent of an encyclopedia; it is the first stop in finding an answer. With over 5.6 million articles in the English language, it is one of the most comprehensive collections of knowledge available. Currently, there are very few female Wikipedia editors and a very small percentage of female-related articles. Art+Feminism is looking to change that by training new Wikipedia editors (it could be you or me or anyone). They are not the only ones either. Wikipedia has its own group of Wikiprojects dedicated to providing female-related articles.

While I had not formally edited a Wikipedia article before, I was vaguely familiar with their style and guidelines, so I thought I would try my hand in becoming a Wikipedia editor and share my experiences with SoundGirls. I had some knowledge of formatting and citing in the Wikipedia style, but I also made sure to keep several tabs open of Wikipedia’s helpful tutorials.

Wikipedia requires strict standards in sources, citations, and sentence structure. There is a lot to keep in mind when writing an article, and so Wikipedia has tutorials and templates to copy from. Self-promotion is not permitted when creating an article. Therefore, sources cannot be a personal website or an IMDB page. Bias is also frowned upon, which means many controversial articles are locked from the fledgling editor.

Often new editors are guided to almost complete topics, ones that only need cleanup in citations or a couple of extra facts.  Many niche articles are plagued with improper citation and writing flags. From there, an editor can build up their chops before turning to a completely new article. Focusing on pre-existing articles also helps with the moderating backlog that is a constant problem for Wikipedia.

Even knowing all of this, I still decided to create a completely new article.  I wrote about Karen Lam, a female film director, and producer, known for her horror short films and for promoting other women in film.  While I did meet her briefly, I have no professional association with her, and therefore I had no conflict of interest with which to color the tone of my article.  She had been interviewed several times in local and national magazines, and her films had won several awards. This meant that she was relevant and documented enough to have an article based off of her. I, the lowly blog writer, still early in my career, do not have the right credentials to have a Wikipedia article, and so it goes. As an added bonus, a film directed by Karen had its own article already and therefore referenced my subject. An article that is not referenced by anything else is an orphan, which often suggests the irrelevance of the topic.

Not including the time it took to research her, I was able to write my article and submit it for the first time during the Art+Feminism event, and within minutes I received my first error flag. I had cited IMDB for awards won by my subject, and so I updated the article, took out a few awards that were only listed on IMDB, and put a new award mentioned in a reputable press release. I did not hear back for a month an a half. My article was then finally approved.

Wikipedia was made to be edited by the public, and it can be another tool to grow the influence of women in media and to break the glass fader.