Before I get started with some more technical blogging, I thought I’d give you a bit of background info on myself.  I’m a 25-year-old woman from Ottawa, now living in Toronto. I’ve always had a passion for music – as a young teen, I’d go to as many hardcore shows as I could. I started to learn bass, and when I was 15, was asked to join my first band, Centertown Insurgents. Coming of age in Ottawa’s punk scene instilled a very strong DIY (Do It Yourself) ethic in me; from recording my own albums to booking my own shows, I’ve always wanted to be involved in the music industry.

While still in high school, I landed a co-op placement at CHUO, a local community radio station operating out of the University of Ottawa. After my placement had ended, I was offered a job as the station’s production coordinator; my responsibilities included recording the station’s ads, helping volunteer programmers pre-record their shows, doing voice-overs and editing interviews, amongst other audio tasks. As I became more involved in community radio, I learned that some stations recorded “live off the floor” sessions with bands in their studios. I wanted to start such an initiative at my workplace but decided I should probably learn more about mixing beforehand. I read every book I could and approached a local sound tech to see if he’d take me on as an intern. He did.

Beyond simply teaching me about wrapping cables, microphone placement, and EQs, Tom showed me the interpersonal skills that were necessary to make it as a tech; a smile and positive attitude go far in making artists feel at home on stage.  Although I never did manage to start recording bands at the radio station, I tried to keep up with mixing by recording my new band’s (Critical Convictions) demo and 7”. 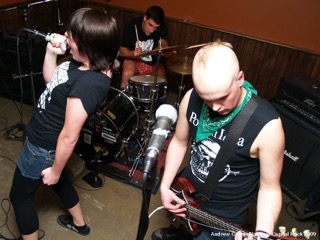 After four years of working at the radio station, I decided to move on to new challenges. As I was still finishing my undergraduate degree in Political Sciences, I needed part-time work. With the help of a friend, I approached Mavericks, a local music venue, about taking me on as a sound tech.

I’ll always remember the first show I worked alone: a supposedly “stress-free” gig in the smaller upstairs club for an acoustic musician and her drummer.  That night was anything but easy, as the musician let me know she was unhappy with everything from her monitor mix to where I’d placed my microphone stands. The following night, I worked my first full band show. Although I thought sound check had gone well, by the time the opener played, I was having problems with the vocals feeding back in the lead singer’s wedges. As my monitors squealed, I anxiously tried to hide in the sound booth, and seriously considered running out. I realized that if I left, I’d never get a callback… I stuck it out and took notes on what I needed to work on. As someone who hasn’t formally studied audio in college, I do most of my learning through apprenticeships and trial and error.

When I started working at Mavericks, I started meeting other sound techs.  Although I’ve always been a tomboy, being the only female sound tech on call was slightly intimidating at first! Fortunately, most of the guys were quick to welcome me and offer advice when needed. I’m grateful to one tech in particular for answering my phone calls when I had questions and taking the time to compare notes over a few post-shift beers with me.  I also credit the club’s owner with giving me the opportunity to learn as I mixed; without his support, I wouldn’t be where I am today as a tech. At first, he offered me smaller gigs so I could get used to the room and equipment. As I progressed, I took on bigger gigs and eventually learned to make full use of the outboard gear. Although I now find this embarrassing, there was a time when the 32-channel Midas Venice intimidated me! 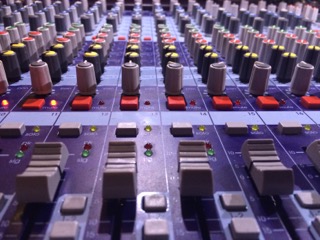 Even if audio engineering is still undoubtedly a man’s world, I met some great female sound techs during my stint at Mavericks. It was one of these women who hooked me up with my current work gig at The Mod Club. I’ve always believed in taking chances, and on December 1, 2014, I made the move from Ottawa to Toronto.

This blog will cover the new sound challenges I face in a bigger city, as well as my touring adventures.  I’m excited to share my thoughts and experiences with the SoundGirls.org community – see you next month!