My little jazz club is about to become a very big deal. A 10 million dollar deal, to be exact. But before that happens, we have to reduce it to rubble. Our final show, an all-day memorial show in honor of a Jazz St. Louis board member who passed away this winter, is in three days. The sledgehammers start swinging in four. This will also mean a renovation of sorts for me, and like the club itself, my current version is going out with a bang. 🙂

Jazz St. Louis has, for some time, had a cooperative agreement with a little restaurant called “The Bistro in Grand Center” (Grand Center is an arts/theatre district in midtown St. Louis, around the campus of St. Louis University). Jazz STL presents it’s “Jazz at the Bistro” shows there 2-4 nights a week, although it and the restaurant are separate entities. This past year however, Jazz STL bought the Bistro and the building next door and made some big plans for it. The little shotgun-style club, with its tiny stage, aging infrastructure, and outdated audio system is going to be totally gutted, merged with the the other building, and reopened in October as a 10 million dollar Jazz Center, housing a new club, a lounge, rehearsal/recording spaces, and the corporate office. Below are some pictures of what the club looks like now, and renderings of the new Jazz Center. 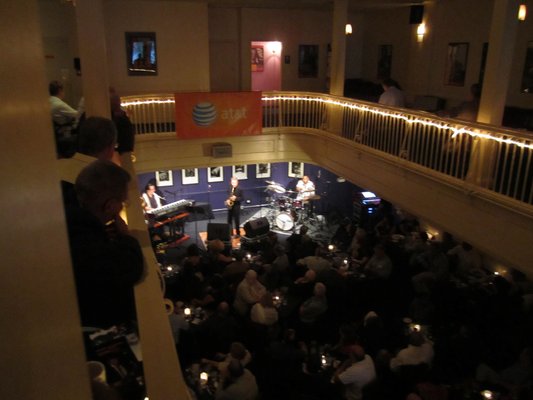 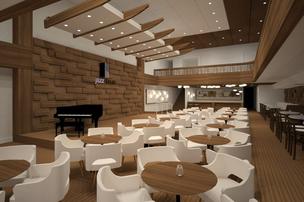 This will be a really unique offering in the city. There really won’t be anything like it from the FOH perspective, either! Console-wise, we are going from a Midas Venice to a Studer Vista 1. We’re replacing the 20-30-year-old Ramsa speakers, all receiving the same mix, with a more configurable, professionally designed system, which (it appears) will feature Vue Audiotechnik speakers. Of the ones we’ve demoed, those have been the favorite. I’ll be excited to share the details of the install as we go through the summer. It will be a great learning experience, no doubt!

This is going to be a first-rate venue and I am beyond honored and blessed to be one of two FOH people who will be at the helm. My boss has asked me to make the new Bistro my “first-call” job, and they’ll be giving me more hours there every week, and more responsibility. It’s a step toward steady work as an audio engineer and the experience I’ll get in terms of what I’ll be working with there can’t be beat.

What this will also mean, however, is the end of multiple-week theatre runs, which means I’ll no longer be able to work at New Line or Stray Dog. Actually, much of local theatre will be off-limits to me with my new schedule – I just can’t be unavailable to the new Bistro for that long of a time. I will still be able to do fill-in work and one-weekend shows, and one of my summer theatre runs (the shows are for young audiences and during the late morning, for the most part) but my work will be transitioning from mostly theatre to mostly music.

I’ve been resistant to that idea up to now. Well, no, that’s not accurate. I’ve been sad about it. Theatre is the best work I’ve ever had and I don’t want to leave it. Eventually, that’s where I’d like my career to land. But right now, having more guaranteed work every week, that pays well and is predictable, is going to make my life a lot easier. The Bistro is a great job and I have no doubt that it will turn me into a better engineer. Besides, I’ve typically been the type of person who has to be dragged kicking and screaming into the future. That’s a bad trait to have for progression’s sake. I’m trying to embrace and welcome change! So I’m doing it.

In the meantime, I’m going to get to enjoy a summer full of theatre! New Line’s final show of this season, Hands on a Hardbody, opens at the end of the month. From there, I go to the fine space at Chaminade Preperatory School for STAGES St. Louis’ “Theatre for Young Audiences” production of Sleeping Beauty. In July/August, I’ll be back at Stray Dog for Funny Girl, and then in August/September, I’m designing sound for The Great American Trailer Park Musical, produced by local company Dramatic License Productions. A stylish send-off, no? 😉 I’ll have a lot to do, to learn, and to share with you in the coming months, and I’m looking forward to all of it.

In my next blog, I’ll be sharing the activity of closing down the “old” Bistro, and giving you a look at the opening of Hardbody. We’ll also talk about how you can make your preshow more than a playlist! Take care and happy engineering!