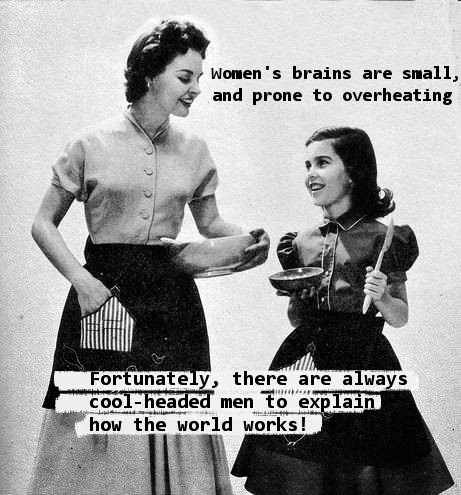 Addressing sexism within our industry and throughout our lives is a complex one, but one we should explore and understand. It requires understanding how it affects our lives, and I think a good place to start is how we process it and deal with it. How much of it is ingrained into us, without ever realizing it?

Internalized Sexism is the belief by girls and women that the lies, stereotypes and myths about girls and women are true.  We have heard our entire lives that women are weak, passive, manipulative, and stupid. We have seen women in leadership roles labeled as bossy, bitchy, and ruthless. We have seen feminists dismissed as man-hating, non-shaving, bra-burning lesbians. How many times have we heard women are their own worst enemies?

Internalized sexism or what is often called horizontal hostility happens when members of a targeted group believe, act on, or reinforce the dominant system of discrimination and oppression. To maintain the sexist system society as a whole must believe the stereotypes and continue to pass these beliefs to the next generation.

Young girls are taught to view other girls as competition. Daily, the idea that women are considered less valuable than men is reinforced. Society values the masculine over the feminine.  Within our industry, how many times have we told other women they just have to “man up”?

When I started working in live sound, I was usually the only woman on the crew for the live event of the day.  People remembered me and were impressed because I worked harder than the guys. I often heard if I only had “ten of you on my crew” or “you put my crew to shame”. While it was true that I was an anomaly, and I did work very hard, sometimes harder than the men on the crew, I just doing what was required for my job. But here is a secret – It also made me feel special.

For years, I was the only woman, and when the second woman joined the Pearl Jam crew, I felt that I lost a bit of my place. Of course, the response from the some of the men on the crew was typical “we have a hot accountant”, for me it was well “she is just an accountant”. Nevermind that she was also a lawyer and wickedly smart. It was not until the third woman who joined the crew that I found a sisterhood, which I found refreshing. At that point, I realized how isolated I was working solely with men.

Early in my career I worked with a few other women in sound and had less than positive experiences. I judged them on their work ethic, work experience, and their appearance. I viewed them with suspicion and felt the need to compete with them. Things I have rarely done to my male co-workers. I always felt we shared tips, advice, and experiences to make us better in our careers. I felt that men made better friends and co-workers.

In interviews, I refused to answer questions about being a woman on the road. The only advice I could offer women was that working in live sound was hard for both men and women. I avoided debates about sexism in the industry, and I believed that if you worked hard to perfect your craft you would be recognized for that.  If an artist did not want to work with women, I did not want to work with them.

I am not proud of this, and it took me many years to come terms with it. It also has taken me years to become comfortable with who I am and what I have achieved. Some of it is a natural progression as I have become older, wiser, and more confident  A lot of it has come from raising my own daughters and wanting a better world for them to live in. Mainly I am sad to see the backlash against women in our industry and society as a whole  I believe strongly in the value of women supporting each other. I know how important it is to provide role models and mentors to the next generation.

It is very disheartening that the only negative response SoundGirls.Org has ever received has come from other women and women’s organizations. While I fully understand the Queen Bee Syndrome and understand that they may feel that their turf is being threatened. I find it unhelpful when in the end we should all be working towards advancing women in professional audio. Working alongside each other and sharing information. Imagine if the Civil Rights movement had excluded other groups philosophies and ideas from the advancement of the movement.

As women, we need to support each other. The GroundBreakers have wisdom, advice, and the strength to offer to the next generation. The next generation needs and deserves our guidance and support. And we all need to inspire young girls growing up today.

While there is not an easy solution to internalized sexism, becoming aware of it is the first step.