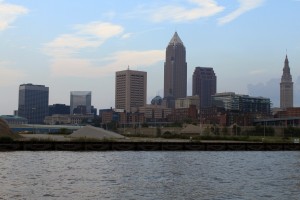 A couple weeks ago I got to work at one of our local festivals in Cleveland, OH called Great Lakes Burning River Fest. It’s a two-day festival based on environmental awareness to maintain a cleaner lake and to support environmental issues in the Cuyahoga area. It also celebrates local live music, food, art and of course The Great Lakes Brewery with their famous Christmas Ale.

The festival located on Whiskey Island had three stages, the Meadow Stage, the Acoustic Stage, and the Station Stage. The largest stage was the Station Stage located along the waterfront on the steps of the historic coast guard station. The Acoustic Stage was a much smaller stage that sat behind the Coast Guard station off to the side. The Meadows Stage was another small stage that sat in the back of the park, in a wooded, grassy area and under a large tent pavilion. 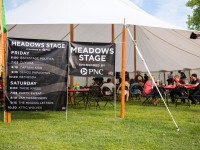 My co-worker Rachel and I were in charge of running the Meadows Stage ourselves. It was very exciting to get a chance to run sound for the stage, but a bit intimidating because neither Rachel nor I was familiar with the gear or set up of the festival. So we tried to prepare ourselves by writing out patch paperwork for each act and then discussed the stage setup for each. There were five acts each day that played for 40 minutes with 15 minutes of set change time in between.

Friday was the first day of the festival, and we loaded in that morning around 8 am. Getting the stage setup was at first a bit overwhelming. It took us a few minutes to get our bearings and figure out the layout of how to set up the PA and where to put our amp racks and console. After about an hour, we finally had everything set. Our PA consisted of two T10s on top of a Q Sub on each side of the stage. Very simple, and worked well for the pavilion tent. On stage, we had three monitors across the front and one in the back for drums. We were running both house and monitors from stage right on an Avid SC48.

The day turned out to be much different than what we had anticipated. We were quite surprised to see a bunch of back line gear appear around lunch time. For such a small stage, we had not thought gear would be supplied for our performers. Once all of the back line gear made it onto the stage, things got a little odd. There was a full drum kit, three guitar amps, bass amp, and keyboard off to the side backstage. Trying to figure out mic placement for vocalists and drums became a bit of a challenge due to the lack of space on stage. Rachel and I made the decision to place three vocal mics downstage in between each monitor as well as supply DIs at each mic in case there were acoustic instruments. Rachel and I decided to just mic the kick, snare and overheads due to space and size. We took a little heat from an older stage hand which felt we should mic all the drums. To ease tensions, we eventually did mic all the drums and had a bit of a heart-to-heart with the gentleman and explained that we were new to the festival and unaware of how the stage setup was suppose to be. After that, we all were on much better terms with one another and were ready for the show to start. 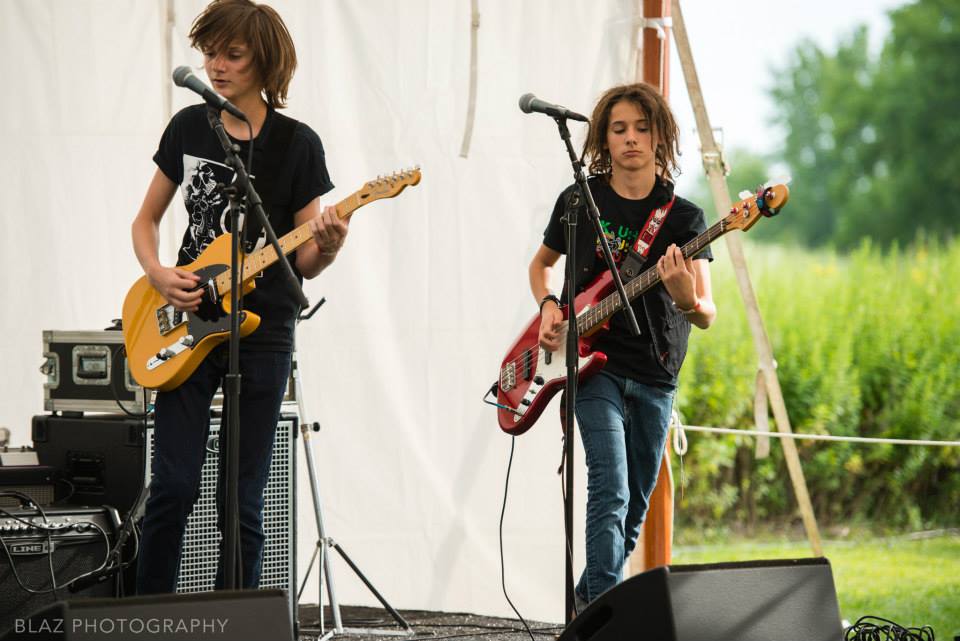 The show started out solid with our first act Backstage Politics, a reggae rock group and were winners of the Tri-C High School Rock Off. We got them set up, line checked, and a basic monitor mix ten minutes before they were to start. The set went by quick with barely any hiccups and well-maintained volume control. 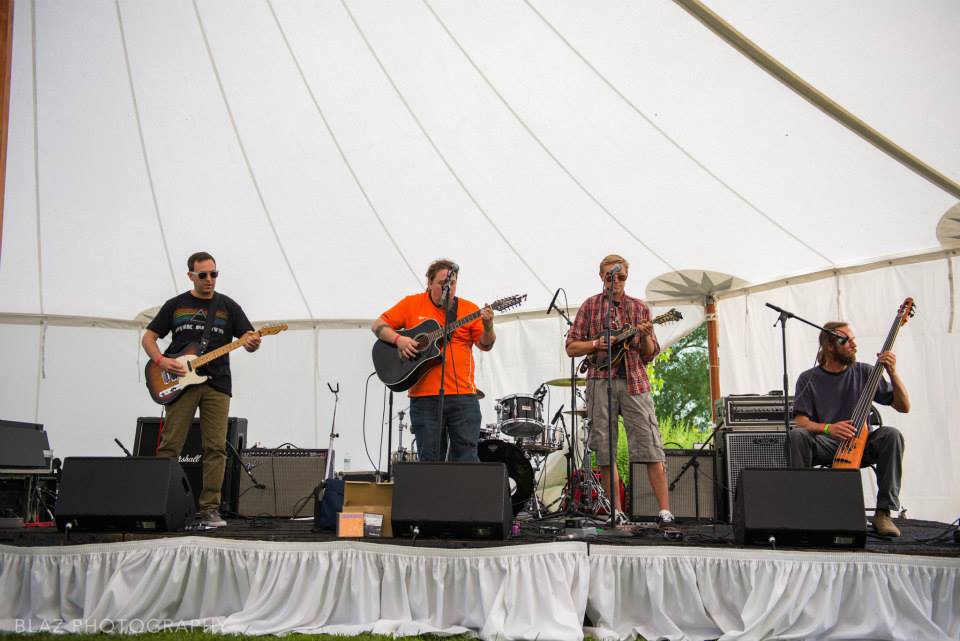 The next act was Cuyuga, a minimal relaxed jam band much like Widespread Panic. They were quick to set up and a lot of fun. We did a quick line check with them, basic monitor mix and away we went! Their set was solid and mellow, and volume control was a breeze, our only struggles were keeping the vocals on top of the other instruments. 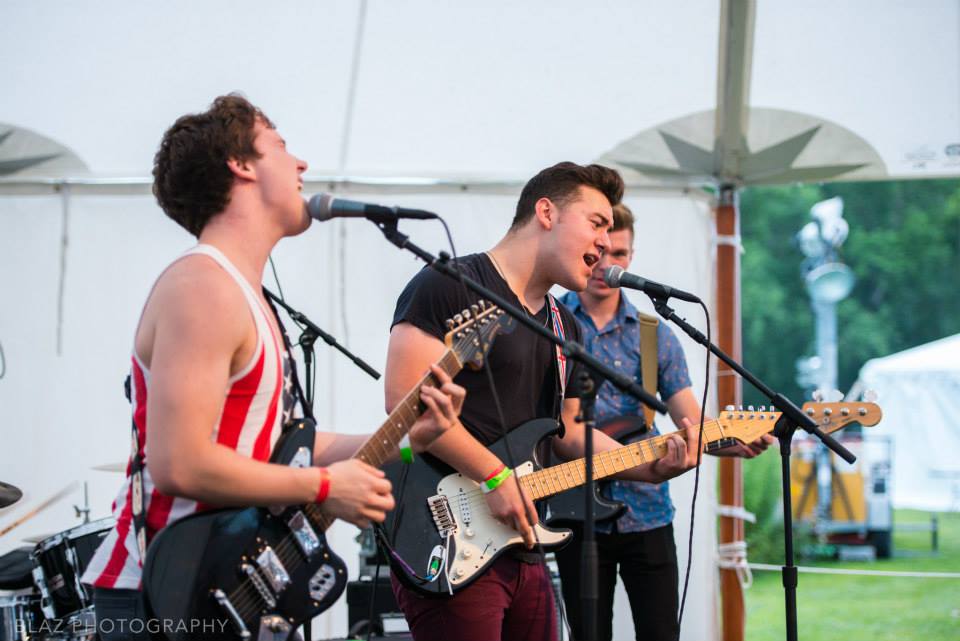 The third act proved to be our downfall. Captain Kidd is an EDM rock band with many complexities, back tracks, drum pad loops, and many guitar pedals plus two electric guitarists, a bassist, two sets of keyboards, and a full drum set! It was a very full stage! We did out best to get everyone set up, and the stage patched. We ended up having to change a few things due to the stage plot being quite different from the actual stage setup. Once we were good to go, we did a line check, and everything seemed good. Then we tried to dial up a monitor mix, and that’s when things got kind of crazy. At first we couldn’t seem to get the back tracks into the monitors, when we were able to, they were blisteringly loud. The surrounding tents could hear them, needless to say; we turned them down.

Once the band began their set, I realized we were in trouble. The stage volume was crazy loud! I only had the vocal mics in the PA and was trying get the vocals on top. It was a loud and blaring mess that I really should have seen coming. I ended up turning all of the monitors way down as they were feeding back. Many of the musicians couldn’t hear their monitors, but every time we turned them up we got lots of feedback from their vocal mics. It was a losing battle that I just couldn’t win so tried to focus on keeping things from feeding back and let the stage volume come from the PA. I had no idea what else to do. That was a tough moment for us. 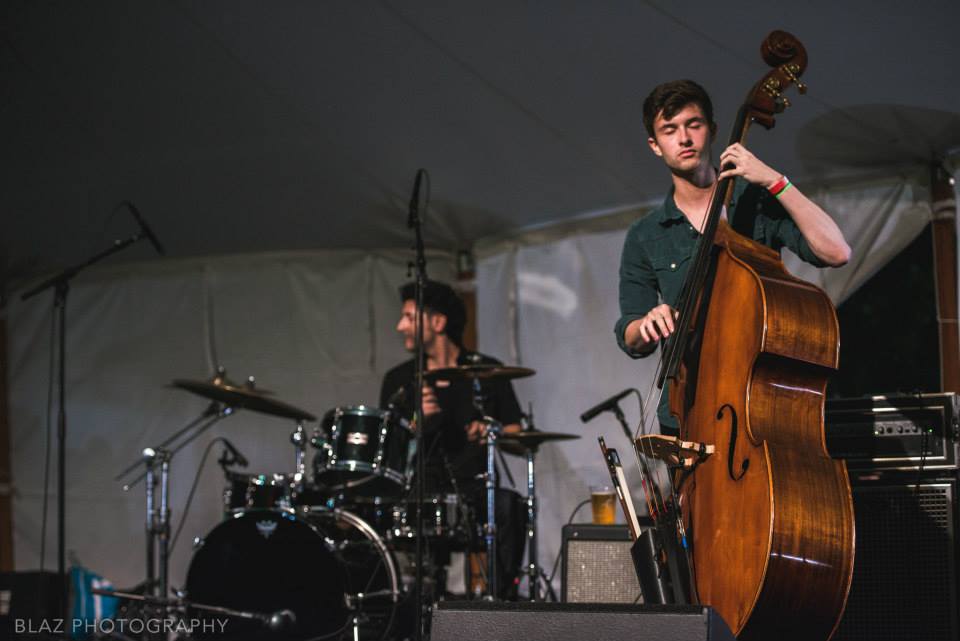 The next act was the Demo Papadimas, a fun blues/folk band. As we were setting up, our patch got a little messy, so it took me a minute to get my bearings again and make sure everything was patched correctly. Things seemed to be looking up! The line check went well but as soon as we tried to get a monitor mix; our monitors were producing no sound. I instantly thought we just blew all of our monitors with the last act. Oops. But in reality, the channels of the monitor mixes were muted. We had become confused with switching back and forth between fader flip mode so much that we had begun to confuse ourselves with what was monitors and FOH. Once we figured it out, we were immediately able to get the show up and running. The band was wonderfully patient with us, and the rest of their set went off with no other problems. 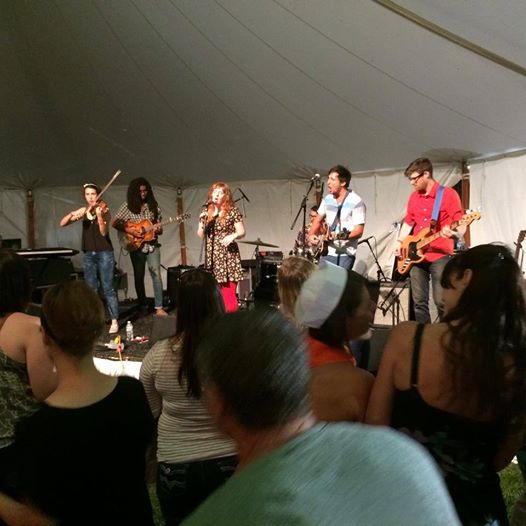 The last act was our redemption from such a crazy evening. Bethesda, a local indie-folk rock band that knows how to put on a show! We got them set up, line checked, and a basic monitor mix. Then off they went! They were loud, fun, and energetic but kept their actual stage volume low which made them a dream to mix. I ended up tweaking their monitors and PA a little bit. It was an awesome way to end the night! 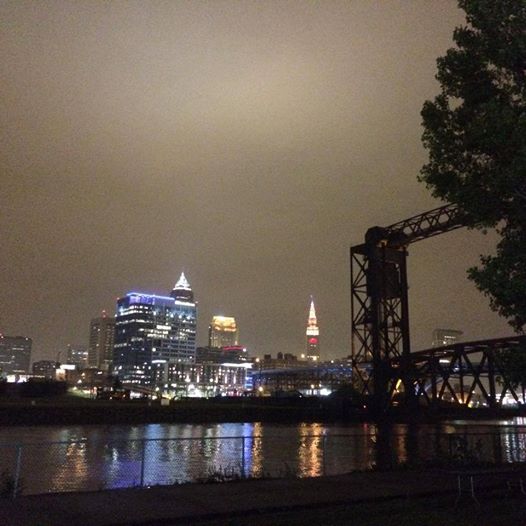