I have just begun my newest tour with Mr Big who is comprised of  Eric Martin, Billy Sheehan, Paul Gilbert, and Pat Torpey.  I have been mixing Mr Big since 2009 when they reunited and we’ve had quite the adventure in touring over the years.  If you’ve read my previous blog about India and SE Asia...that was one of them.  They are incredible musicians and a real pleasure to work with.

For this tour we are playing in everything from clubs to arenas, half with local production and half carrying full production. To make things a little easier and provide some consistency we carry an IEM and RF rack for monitors, a mic package, and a FOH Insert and FX rack.  The band is on a combination of IEMs and wedges.  We are currently using Sennheiser 2000 series and a Shure R series Wireless system with a Telefunken M80 capsule for the lead vocal. My FOH rack consists of 4 Empirical Labs Distressors– 3 for Bass guitar and 1 for lead vocal.  Also a TC M2000,TC voice doubler, and TC Helicon VoiceLive Rack.  The Distressors are my go to comp.  I have never found another unit or plug in that works so well on anything and everything and I have long been a fan of TC Electronics reverbs.

With the venues and the itinerary being literally all over the map, we need to be adaptable to the situation of the day. 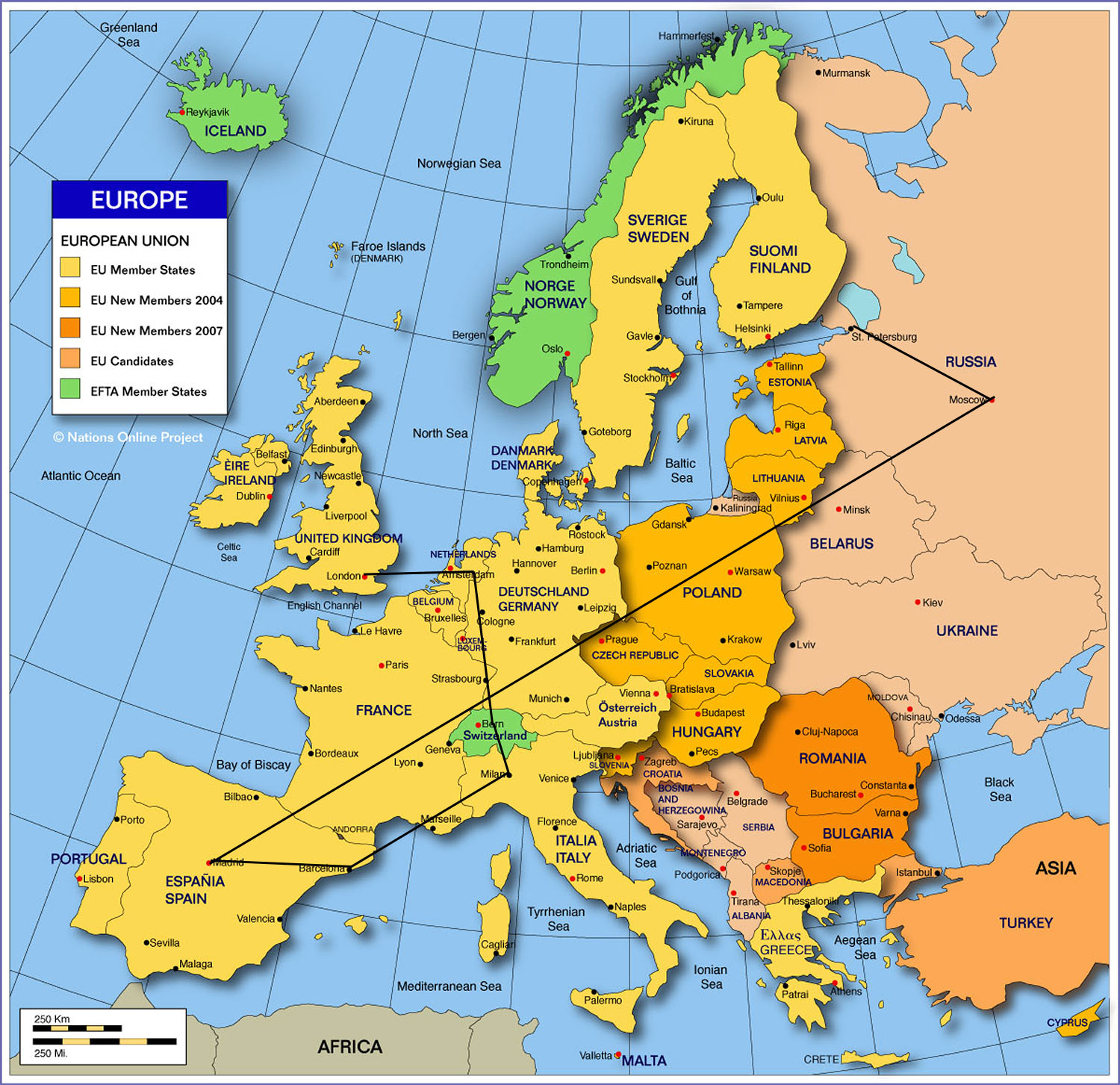 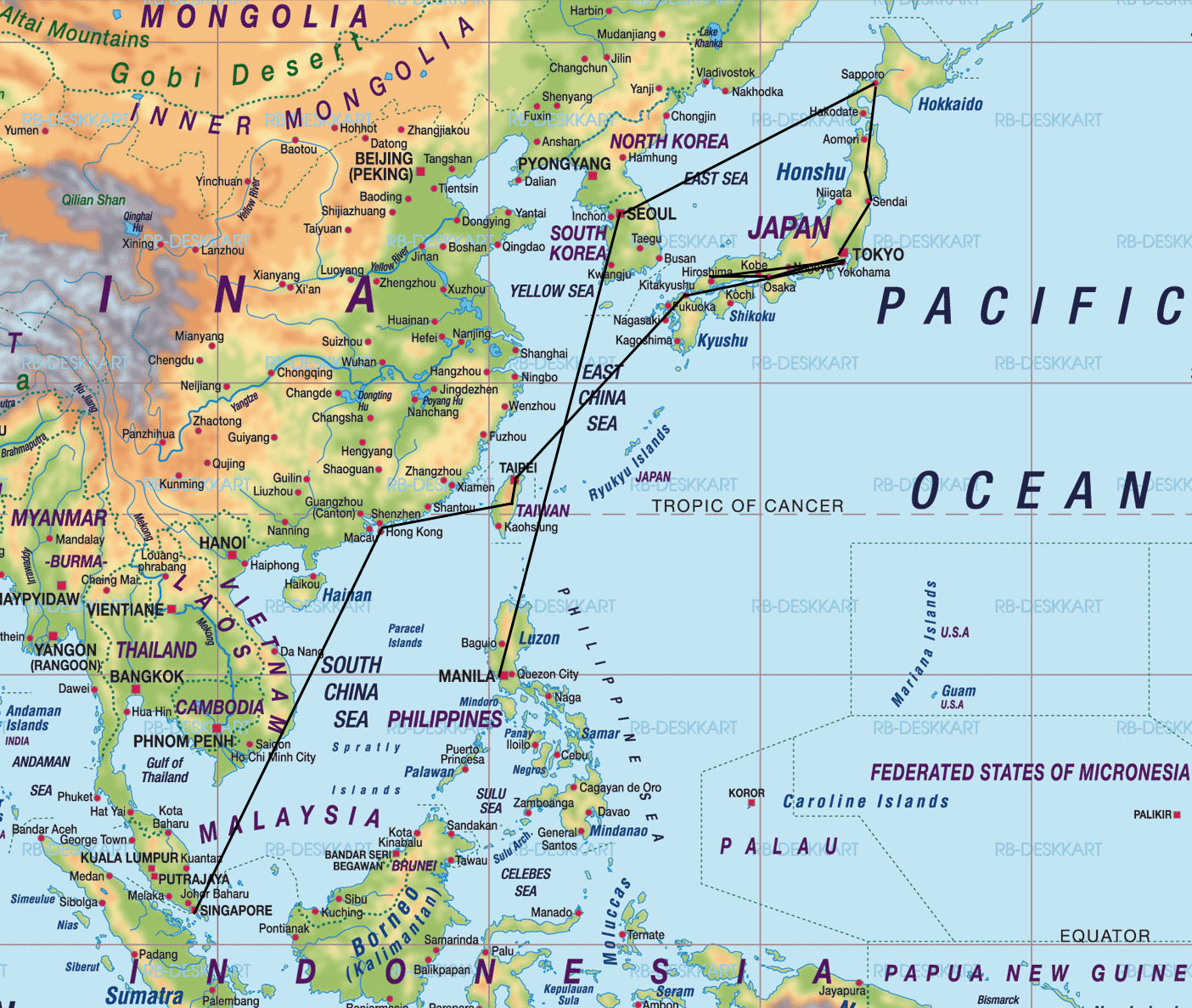 We started the tour with a week of shows in Europe on local production,  picking up backline from John Henry in London that we carried that with us throughout Europe.  Next, we flew to Russia for two shows and are currently in Manila, Philippines.  We move on to Seoul, Republic of Korea before heading to Japan for a few weeks.  In Japan we will be carrying full production from Clair Japan.

The Pre-Tour Prep work:
Preparing for this tour was unlike the previous tours I did with Mr Big.  The bands original drummer (Pat Torpey) was diagnosed with Parkinson’s disease earlier this year and at first felt his symptoms would leave him unable to perform well enough to do the tour.  An additional drummer (Matt Star) was auditioned for back up if Pat couldn’t play.  It was not looking good for Pat, he was exhausted, having tremors, and really feeling the effects of Parkinson’s. The first plan was for him to join us for only the Japanese leg of the tour and play in the Acoustic set. As the start of the tour grew closer, Pat’s medication was getting the symptoms under control and he was feeling much better.  He was getting stronger and playing more.  The band was in Japan doing promo when I got word that Pat would be joining us for the entire tour.

All of this was coming together less than a month before the tour was to begin.  The promoters and local production people however require our technical info long before that.  2-3 months out before the start of the tour I needed to create a stage plot and input list as well as technical rider.  At that point we still didn’t know what the drummer situation was going to be so I tried to hold off until the band had confirmed Matt as the additional drummer.  I then spoke to him about what his kit consisted of so I could finish the input list and technical rider.  (Version #1). 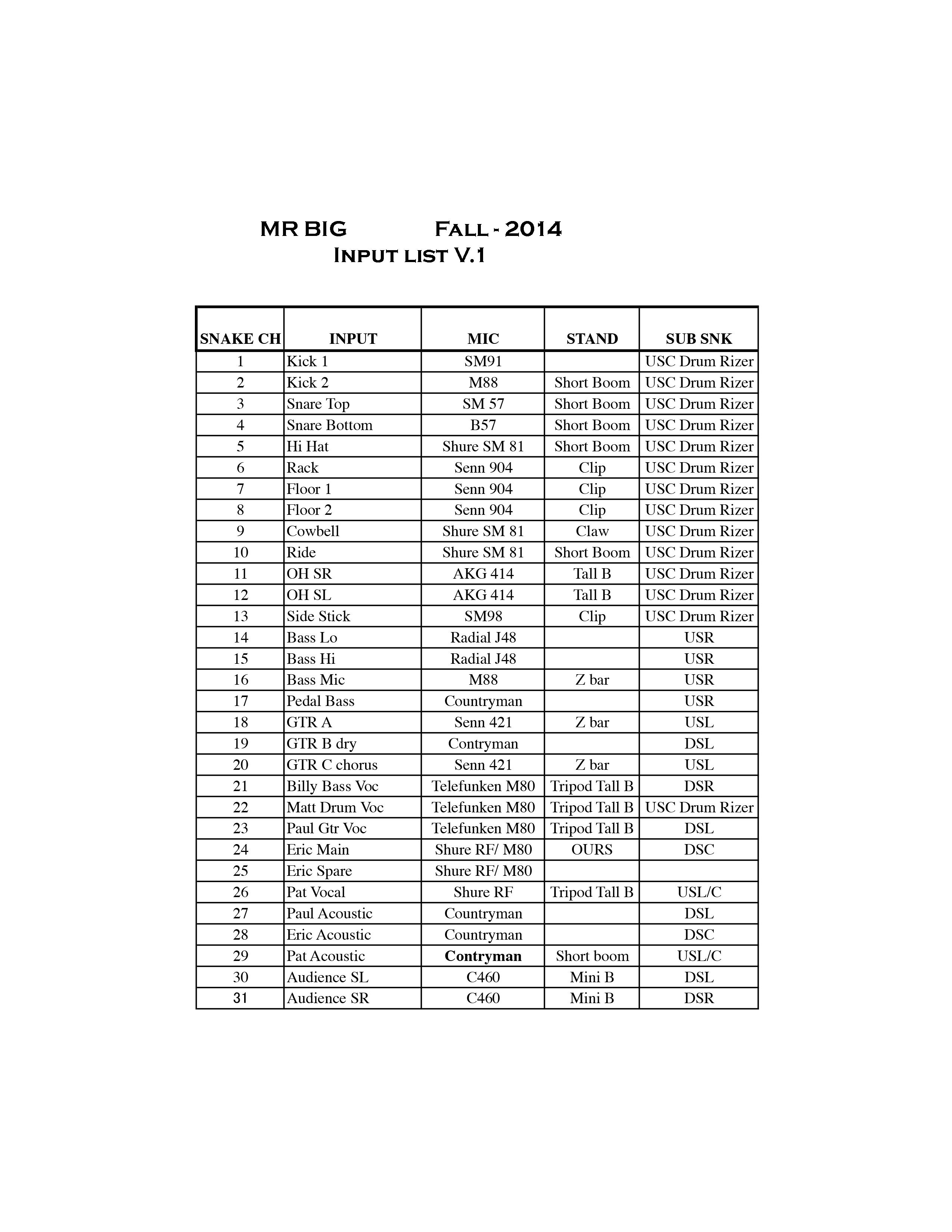 When Pat decided he felt strong enough to join the tour, it was still unsure how much if any of the set he would be playing, whether he and Matt would share the same kit, be playing Matt’s kit or Pat’s kit and what the other would be doing when he wasn’t playing?  Mr Big has a lot of 4 part vocal harmonies and all of the members sing back up.  Would Matt and Pat both be singing?  All of these questions needed answers which were still being decided as the band began rehearsing for the tour.

Somehow I went from having an easy 25 input band to 43 inputs almost over night!
When I started mixing Mr Big in 2009, they were a straight forward rock and roll band, with only 25 inputs.  No tracks, nothing hiding behind the curtain, what you see on stage is what you get- an amazing four piece band with four part harmonies.  The band kind of mixed themselves, everything just fit and had it’s place in the mix.  I would spend most of the show mixing the harmonies.  But this tour would be different, my easy little 4 piece, 25 input band has become a handful to mix compared to what it was.

Since it looked like we might be switching between drummers during the show, I decided it would be wise to split the drum channels so the monitor engineer and I would have- Matt drums and Pat drums.  Both have very different styles of playing and there are a lot of adjustments needed to be made to the kit (gain, Gates, etc..) when they switch back and forth.  This could be accomplished by creating a scene or snapshot for each on digital but as I am using a different console every single day and not familiar with the scene/snapshot system on every console I chose not to run the risk of really screwing up my show and instead, to adjust things manually.  When I get to Japan I will be carrying a Midas Pro 6 for our nine shows there and as I am very familiar with the scene programming on the Pro 6 I will be taking advantage of that feature.

I revised the input list to include the additional drum channels.  Input list V.2  Once the band started rehearsing, Pat decided he was going to add a small cocktail kit so he would have something to do while on stage when he wasn’t playing the regular kit but singing backing vocals. Input list V.3 and Stage plot V.2  I updated the T.M. and we decided to not send any more riders/plots and input lists until we got to rehearsal and things were settled.  I had already spoken to half of the promoters/production people about our audio requirements so I would need to update all of them with the new info.

Nothing ever goes as planned
Mr Big doesn’t do production rehearsal,  just a band rehearsal with minimal monitors.   The plan was for myself and the backline techs to come in for the last two full days of rehearsal.  I find being at band rehearsal very beneficial, if the band actually rehearses.  Mr Big does.  It gives me a chance to watch, listen, and make a lot of notes.  Since I have no mixing to do at rehearsal and they don’t use any tracks, I can really focus on listening to the live arrangements, and watching what everyone is doing.  This allows me to plan for and properly feature any creative, subtle parts that might otherwise be missed.  I’ll spend a few weeks listening to the recordings before a tour starts but the live arrangements can differ sometimes greatly from the recordings, so whatever time I can get at rehearsal to re-learn the songs is a plus.

Now on version 3 of the input list- after I arrive at rehearsal, Pat tells me he is also going to sing off stage for some of the show, (another input).  Eric, the lead singer decided he would also be playing acoustic guitar on two songs, ( another input).  Paul, the guitar player was adding a stomp pedal for his guitar solo and on the last day of rehearsal, as we were loading out mentioned he was going to pick up some sort of practice amp or pod for Matt (the drummer) to play guitar through (two more inputs) during one of the encore songs- a cover of Judas Priest’s “Living after midnight” during which they all switch instruments.  Input List Revision #4. 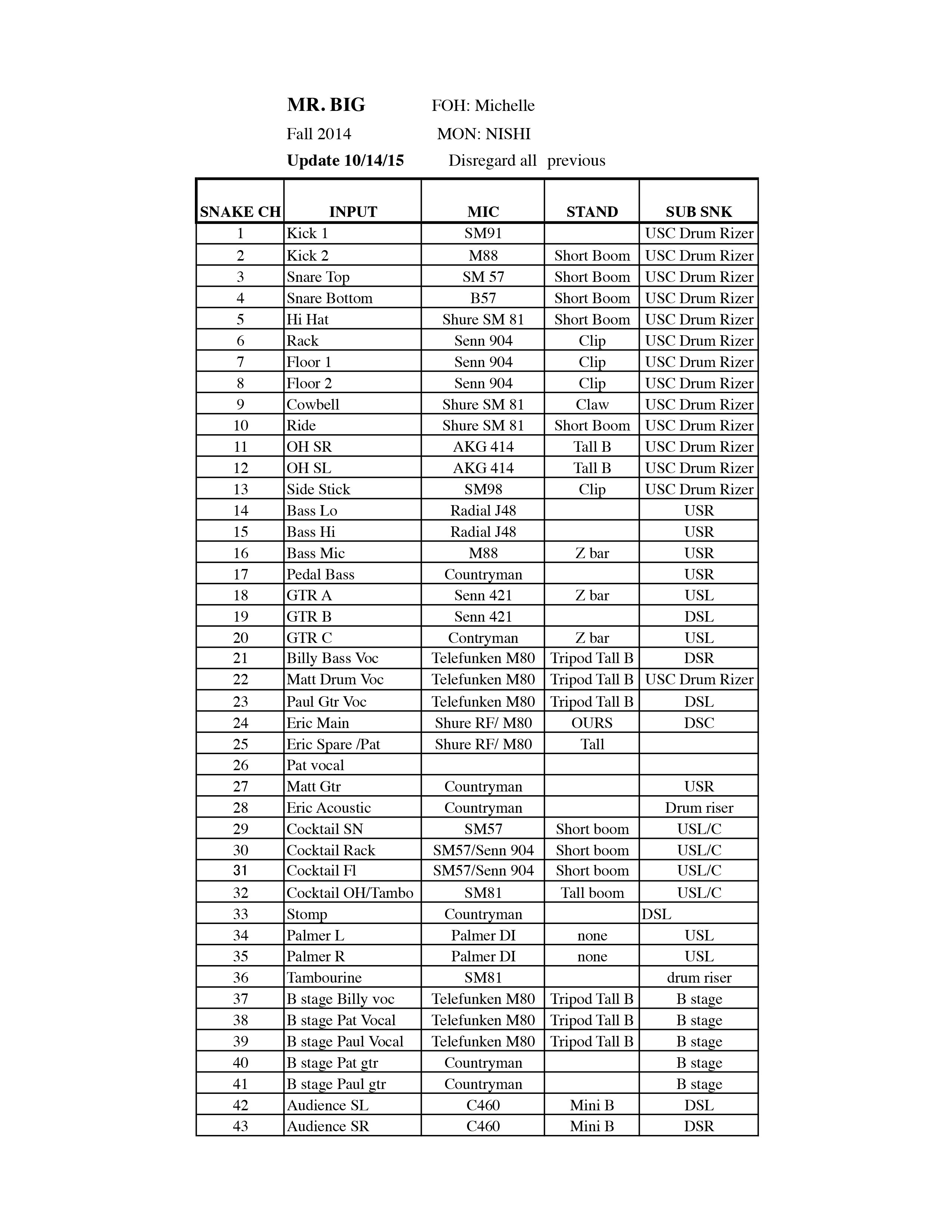 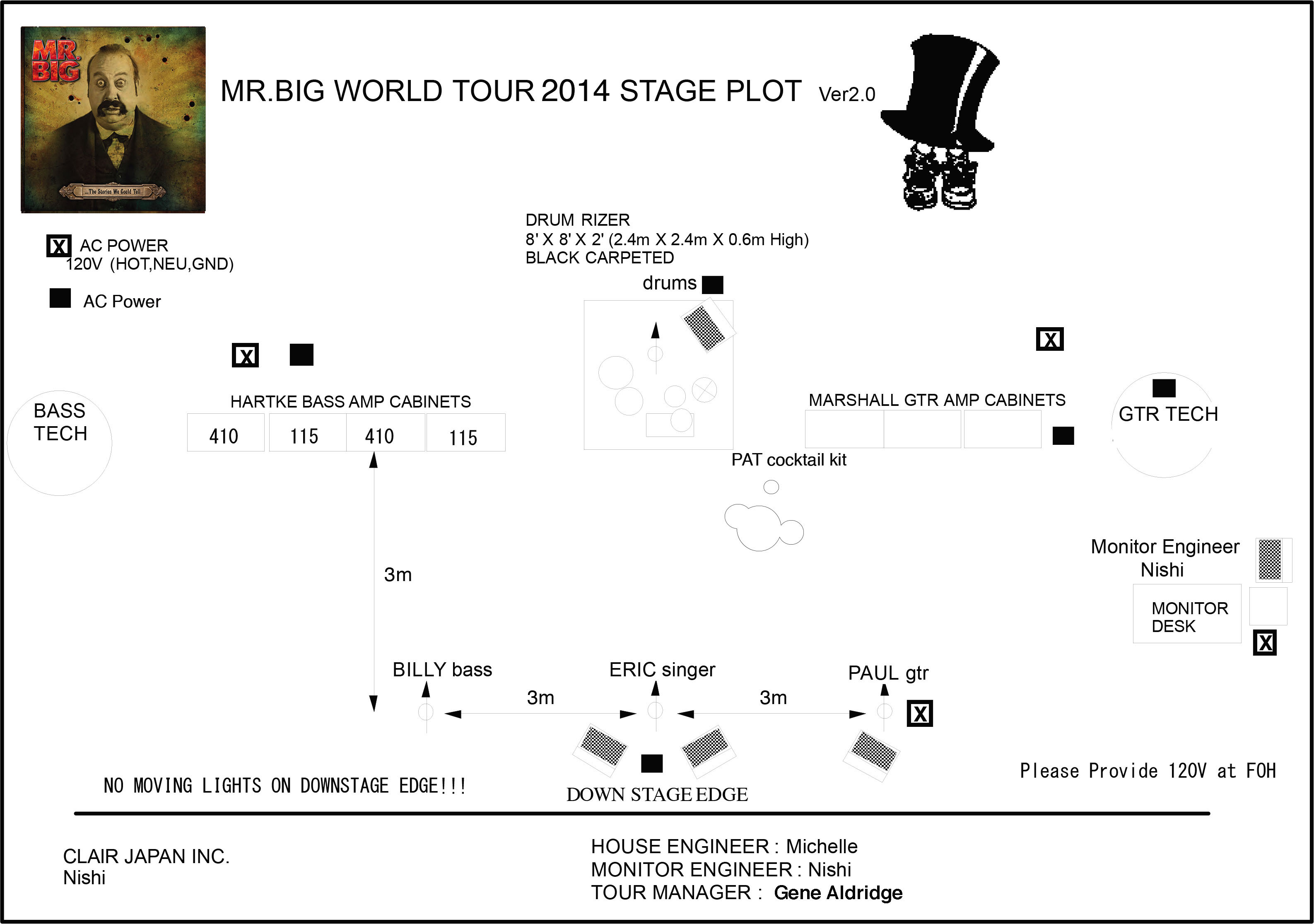 There’s a lot of new stuff to integrate and not a lot of time to pull it together.  Pat decided which songs he would play drums on and where and what he would be doing on the others.  The rest of the set list got sorted out complete with an acoustic set and the surprise encore.

The first two days of the tour were non-stop.  We hit the ground running and had not a moment to spare until the gig was over. Just not enough time in the day. Sorting out the local backline gear, digital consoles dujour and realizing that my plan for splitting the drum channels between the two drummers just wasn’t going to happen since we never had enough time to check the lines and dial it all in. Our first two gigs were club gigs in Europe. We couldn’t load in before noon and with early doors there was only so much we could accomplish in the day.  Regardless, the shows went well.  I made some mental notes of things I wanted to work on for the next day and by day four we were finding our groove.

After the European shows, we flew to Russia for shows in Moscow and St. Petersberg.  The tour bus is gone as well as the backline we carried through Europe.  We will be flying everywhere until we get to Japan the first week of November.  I’ve got a few days off in Manila and am considering a hike to Taal volcano but only after I find somewhere to finally do my laundry!