Hearing tests aren’t a common topic of conversation between audio professionals. But why? You’d think in an industry where our careers depend on hearing (and we do educate about hearing loss) we may want to get our ears checked periodically. A lot us probably don’t do it because we think our hearing is fine. And tests are basic – most audiologists only test up to 8kHz which is fairly limited for audio engineers. But how many of us don’t get tested cause we’re scared? What if we actually have a hearing a problem? Is it better to just not know?

I went to see Dr. Julie Glick of Musician’s Hearing Solutions after a couple weeks of tinnitus and muffling in one ear that wasn’t going away (my first hearing test in 20 years). Her specialty is musicians and audio industry professionals and what caught my attention about her practice is that she does hearing tests up to 20kHz.

Before she could conduct a hearing test, Dr. Glick had to clean my ears. She used a lighted “curette,” which looks like a clear crochet needle that lights up to see in the ear canal. The process was far from pleasant but necessary if you have bad wax buildup. The results were immediately noticeable. The muffling completely went away and while the tinnitus was still there, it was less noticeable against the noise floor of the room, which I couldn’t hear well before.

The hearing test was performed in an isolated booth in her office. The test itself is very simple: press a button when you hear a long beep. Each beep starts out at a noticeable level then drops a few dB until you can’t hear it anymore. Then, the beep changes to a different frequency. Dr. Glick does all the testing by computer so the button pushing is registered within the software to help correlate the results.

She also did a Tympanometry test, which checks how well the eardrum moves. A small probe is put in the ear and then the ears are given a puff of air. It’s easy and painless.

We were immediately able to look at the results: My hearing was within normal range – but what is considered “normal” includes some loss. It’s sort of like acoustically tuning a room where a room could be called “flat” but its frequency response isn’t truly flat.

But there was a surprise when we looked at the Audiogram results: there was a noticeable difference between my ears. My right ear, the one I was concerned about, performed better than my left ear at high frequencies (8-12k). I knew immediately why: I played the violin for 15 years. I had a loud, high-frequency instrument inches away from my left ear for hours every day. I’ve probably had that discrepancy throughout my audio career.

Here’s a generic example of an audiogram to see what one looks like:

Sample Audiogram up to 8kHz 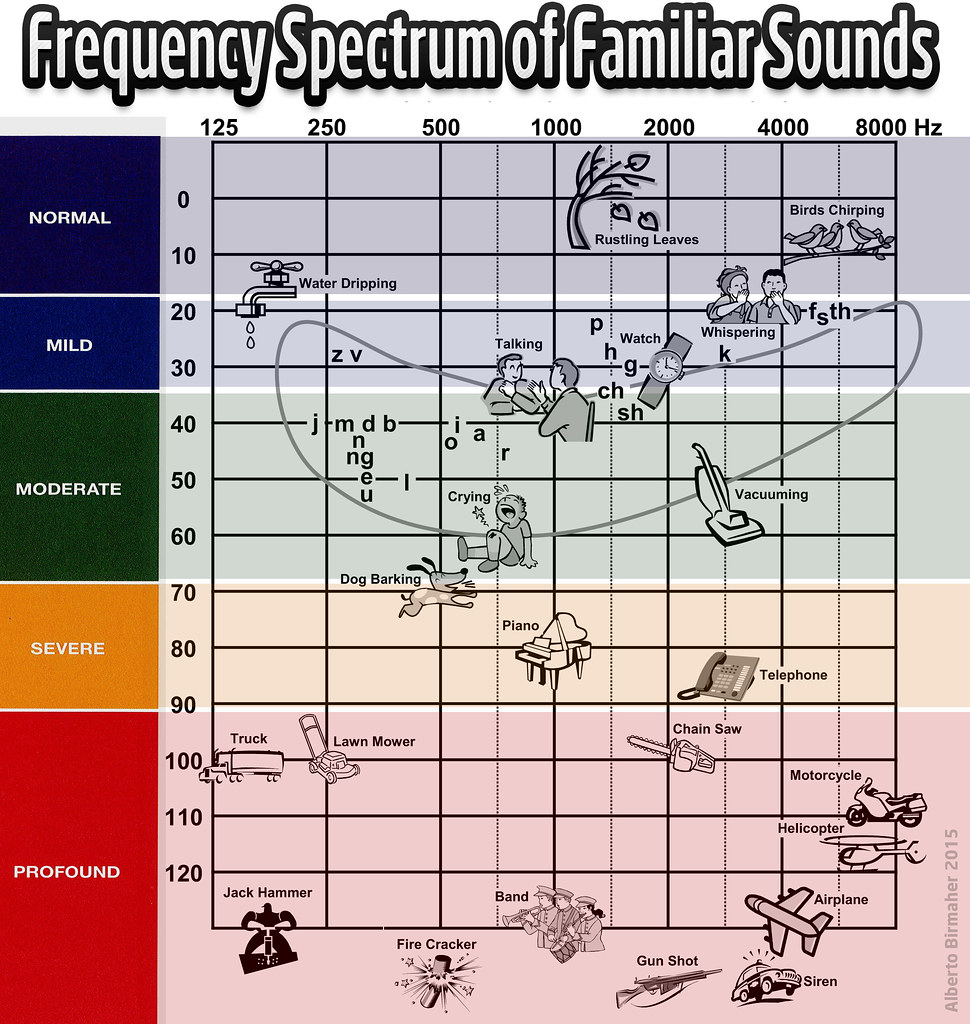 What do the results mean?

I asked Dr. Glick to help explain how any hearing loss (even if it’s considered within “normal” range) would affect the work of an audio engineer or mixer. Frequencies like 12-16k are crucial for tasks like de-essing and noise reduction. I assumed a hearing curve is like an EQ curve (or a room curve) – that you have to compensate even when you’re mixing at nominal levels. But, that is actually incorrect.

The scale used to measure loudness outside the ear is dB SPL but hearing is on a scale of dB HL, or Hearing Level. The dB HL scale is based on the SPL scale but with a curve applied. The way Dr. Neil Bausman explains dB HL, “Our ears do not hear equally well at all frequencies. If our ears heard all frequencies of sound equally well, then we wouldn’t need the HL scale.” (His article is great for more detail!)

What the audiogram is showing is the level (HL) where the frequency completely disappears for you. This makes sense based on how a hearing test occurs because there is a threshold where a tone is played and you won’t hear it. So, if you’re mixing at a nominal level (like a reference level of 85 dB SPL) your hearing will always be “flat” – unless you have severe hearing damage at some frequencies. With normal to moderate hearing loss, it’s only when you drop to low-level mixing where you might not hear some of those frequencies. But, it doesn’t make sense to do detail EQ or de-essing work at a low level. It’s something to be aware of but doesn’t necessarily need to change how you work.